June 14, 1998.  Michael Jordan hits a game winning jumper to capture his sixth NBA championship with the Chicago Bulls.  The NBA celebrates its highest rated game in history.  Everyone rejoices.  Flash forward 15 years and the NBA has yet to return to that same level of popularity.  The Jordan Gap persists as Shaq, Kobe and others attempts to carry the torch.  Despite their greatest efforts, the nation moves on to football, and NBA ratings generally decline.  LeBron James seems to be the second coming, but more than 5 years into his career, the NBA still hasn’t seen a resurgence.  Enter big data.

In 2013, the NBA invested in expensive infrastructure to enable state of the art statistical analysis never seen before.  Leveraging technology developed by SportsVU, the NBA installs 6 cameras in the catwalks of all 30 arenas.  These cameras along with a robust backend allow the league to collect granular data on every player’s movements.  The data collected includes speed and distance, touches, passing, defensive impact, nuances of shot making, rebounding opportunities and more.  In short, it was now possible to go well beyond the “eye test”.  Analyzing the data would allow people to better understand the individual performance and contributions of any one player in this team game.

Installing the SportsVU system created value by offering universal access to never before seen data.  The NBA was smart to install the equipment for all teams.  While teams helped fund this infrastructure, the NBA helped with the cost and played a critical role in coordination.  Instead of favoring big market or top performing teams, the NBA invested for the future.  Universal coverage is great, but universal access was even better.  Anyone from fans to general managers can access this data via websites like www.basketball-reference.com.  While the main audience is likely journalists writing about the sport, giving everyone access makes a democratic statement that can only help the NBA’s brand image.  Lastly, it can’t be stressed enough how impact this new capability could be.  The overall league increase in 3-pointers attempted can be largely attributed to this innovation.  Many teams have overhauled their offensive schemes to enable more opportunities.  Traditional big men have lost value in today’s faster, “small ball” game.  This trend was at least in part driven by SportsVU.

Value capture is effectively indirect.  The NBA does not charge for access to this system.  While it probably could ask for a nominal subscription fee, I don’t believe it does so.  Instead, the NBA is banking on the outputs from the data driving more interest in the league.  Journalists on ESPN and Grantland routinely reference unfamiliar statistics leveraging this data.  They also have to attribute the source, which further builds the NBA brand.  Some have also argued that such rich data will enable a “Moneyball Effect” where small market teams can use superior analytics to better manage themselves and be more competitive.  While there are no compelling examples of this yet, the theory remains.

Moving forward, the NBA should continue investing in this technology but ensure that the outputs are helpful.  Grantland, before it was shut down, did an admirable job of presenting the data in user-friendly ways.  Consider this shooting chart for LeBron James. 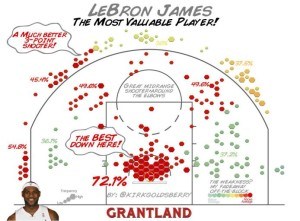 It’s pleasing to the eye and relatively easy to digest.  Compare this with some of the awkward phrases you’ll find on ESPN.com and you can see how things could go awry.  As with any case of plentiful data, the users will have to separate the signal from the noise.