There are thousands of international films produced every year, but only a fraction of them screened at festivals and even less gets distributed to the audience. The film industry is dominated by the big studios and distributors; Online distribution Platforms like Netflix and Hulu only work with major distributors and aggregators and do not offer appropriate financial incentives to independent filmmakers. Talents face numerous challenges from access to funds, and distribution channels to marketing and making enough money off their creations, and the audience does not have access to great international films that are produced every year, and do not have a platform to influence the kind of content that’s being produced.

MoviePigs is a mashup of Netflix and LinkedIn for international film. It’s a 2-sided platform that allows filmmakers to promote their work, and the audience to watch international films from around the world. Its goal is to connect audience and talent by giving the power of evaluation and selection to their customers.

MoviePigs Launched its beta platform over a year ago with over 2000 subscribers and 300 films, it connects talents directly with audience, marketing themselves as “Home for Talent” they encourage talents and filmmakers in their network to promote their new projects and engage with their fans through customer relationship management. The audience can rate and comment on films and talent performance. In addition to that, they encourage talents to connect and collaborate with each other through “talent social network” to undercut agencies or aggregators in the market. The backend data analytics leverage that the platform has supply supported by their talents and demand through audience and subscribers interacting on the platform, to develop a unique viewership recommendation algorithm based on their references and feedback, and build a dynamic model for international and independent film distribution to achieve higher profitability and viewers.

Platforms like Hulu and Netflix that allow users to watch any type of video or movie anytime they want, but they have failed to bring to the US, international films tailored to diverse communities. Additionally, open platforms like YouTube make it impossible for filmmakers to achieve profitability. Netflix for examples is unable to effectively acquire a wide range of international films from different regions, mainly because they are not local in those regions, and cannot focus on one community at a time to serve them better and connect to their network of talents.

MoviePigs is targeting international film lovers in general, but initially they are focusing on the diaspora communities in the US who are eager to watch content from their home countries, they estimated that 230 million people in the US population are connected with their country of origin; 40 million of them are foreign-born and immigrated to the US. The platform is targeting to capture 9% of this population similar to Netflix ratio of total US population.

The platform currently focusing on communities with highest demand and lowest price elasticity level (Turkish, African, Arab, and Persian) offering their audience local contents from their home country with English subtitles with a similar subscription model to at $6.99/month. In addition to subscription revenue, they are planning to produce their own original programming of features films and documentaries by 2020, and offer production services to their network of talents, TV networks and foreign film producers for a fee. 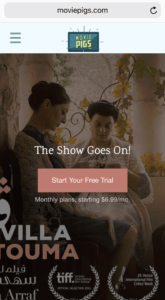 MoviePigs is looking to expand their services by adding crowdfunding capabilities for filmmakers to support their productions and distribution, based on audience preference. the main mission for the platform appears to be connecting filmmakers and audience while giving the opportunity to young talent to grow their productions and reach a wider range of audience, however, it is early to tell if their strategy is sustainable.

HotelTonight – a Marketplace for the Spontaneous Traveler