Moleskine is the maker of treasured notebooks for artists, writers, and designers alike that are modeled after those used by greats like Ernest Hemingway and Vincent Van Gogh. The brand has become synonymous with simplicity, nostalgia and design excellence. Over time, a Moleskine notebook becomes an artist’s priceless possession, holding prized sketches, notes, and song lyrics.  The company’s customer base is frenetic about the brand, often refusing to purchase other mainstream notebooks.

However, in 2011, Moleskine needed to redesign it’s logo for its online platform, Moleskinery.  Naturally, the company looked to harness the loyalty and talent of its artistic and design-focused customer base by crowdsourcing the new logo design.  Unfortunately, their failed crowdsourcing attempt created unforeseen backlash and public animosity amongst their loyal customer base.

The bounds of the contest were fairly simple.  In late 2011, Moleskin announced their crowdsourcing event to create a new logo for Moleskinery.  Anyone was allowed to participate, and the selected winner would receive a 7,000 euro reward.  In addition, Moleskine would retain the IP for all submitted design ideas.

The backlash to the event was quick and fierce. 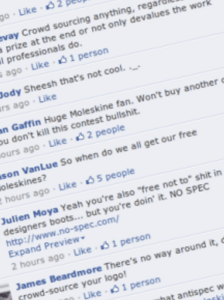 Overall, the crowdsourcing event failed because it turned an otherwise remarkably loyal fan base against the company, for the two basic below reasons:

This left the impression that Moleskine was devaluing the designer, which is the exact community that had dogmatically supported the rise of           the brand.  The choice of crowdsourcing for logo development created a sentiment of betrayal and distrust amongst the fan base.

I believe that Moleskine should not have launched a crowdsourcing campaign in this fashion.  The company should have recognized that retaining the IP, in particular, would make the campaign feel highly speculative to their community.  While I don’t know that I would blindly recommend crowdsourcing to a company like Moleskine in the future, I would recommend that they allow any designer that submits a design not selected as the winner to maintain the IP.

Watsi: ‘Giving Back’ through crowd sourcing!