Duolingo was founded with the mission to provide free language education to the world. Today, it is the world’s largest online language learning platform, with more than 200 million users and 25 million monthly active users.

This blog post will evaluate Duolingo’s initial business model to crowdsource and sell translations, introduce its newer monetization ideas, and propose a few reasons for why crowdsourced translations face many challenges to be a sustainable or large enough revenue stream.

Initially launched as a private beta in Nov 2011, Duolingo accumulated interest quickly – with 100,000 people on its waitlist.

The initial business model at Duolingo was to build a platform that allow users to learn languages for free and in the process of learning, translate real websites and documents. Duolingo then made money by selling the translated content to major publishers such as BuzzFeed and CNN, who wanted to translate their English articles for international markets.

At the beginning, Duolingo focused on two popular languages, Spanish and German, and its own team kicked off with 10,000 translated sentences, leveraging documents with Creative Common licenses.

Duolingo created value for both the language learners and the paying publishers, but initially only captured value from the publishers.

For the language learners, Duolingo stood out among competition for its entirely free service and also provided the opportunity to translate real life news articles rather than fictional phrases. Duolingo incentivized participation by building a social community and gamification elements in its lessons to keep users motivated and coming back for more, and thus, translating more articles.

For the publishers such as BuzzFeed and CNN, Duolingo was a more cost-effective solution (4 cents per word compared to industry standard of 6 to 10 cents). It also helped publishers launch their international websites more quickly, since they just translated existing English articles instead of recruiting large new teams of writers and translators. 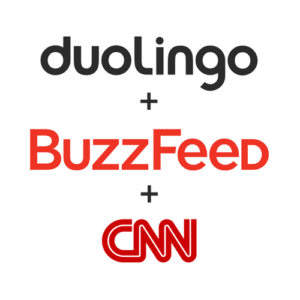 Duolingo recognized quality and credibility as important factors for a crowdsourced business model, and has worked to build quality control tools and leverage the scale of crowds. Duolingo has an internal team of PhD’s that work on determining the best ways to learn through science. It also actively conducts A/B testing and experiments on its users, monitors KPI’s and collects user feedback to iterate.

To ensure quality of the translations, Duolingo’s lessons evaluate a user’s skill level and progress, so users are asked to translate sentences within their capability, and more complicated lessons (and their translations) are locked until users complete simpler tasks. In addition, users can vote on the quality of other people’s translations. Leveraging the large user base creating a large number of data and submissions, Duolingo’s algorithms then compile and determine a more accurate and high quality final translation for each article. 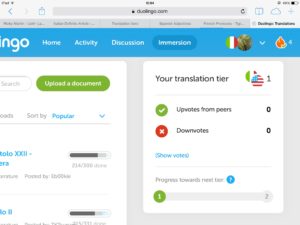 For the Language Incubator, Duolingo vets the members who apply to be moderators – the leaders put in charge over each language course (e.g., German for Portuguese speakers). Founder von Ahn told Techcrunch that applicants were impressive and some have with PhD’s in their languages. The leadership team monitors certain metrics, such as number of users who return, and what percentage of learners get the exercises correct, to evaluate if Duolingo needs to take action with the moderators.

Duolingo also cites several independent studies to build credibility for its services. According to Duolingo’s website, an independent study (conducted by the City University of New York and the University of South Carolina) concluded that an average of 34 hours of Duolingo is equivalent to one university semester of language education.

In recent years, the company appears to focus more on user experience and capturing value from these language learners.

Duolingo began including ads in the free user version and in April 2017, the company launched a paid subscription, called Duolingo Plus, where users pay $9.99 per month to enjoy an ad-free experience and the ability to download lessons for offline use, which can come in handy when traveling without a stable Wi-Fi connection. 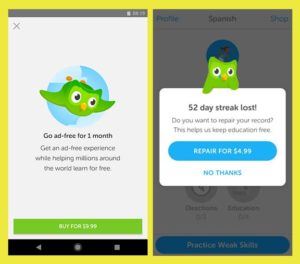 Duolingo is also pursuing certification services, first through the Duolingo English Test, for people looking to certify their English skills. For the language learners, the test can be done remotely and cost of $20 is much cheaper than other existing certifications. 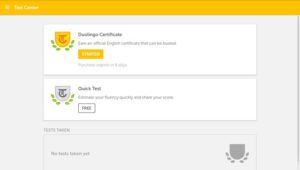 In a Fast Company interview in late 2014, the company leadership announced that Duolingo will still sell translated text but a bigger focus will be working towards an adaptive platform that will personalize teaching to the strengths and weaknesses of individual learners. In July last year, Duolingo raised another $25 million (Series E) and the company announced it plans to use the funds to build new products for learners, expand into Asian languages, and invest into artificial intelligence

First, there may not be enough skilled users at that advanced language level as demanded by large media companies (even if the articles themselves are not so sophisticated. As a digital platform, Duolingo’s mix of users likely skews towards beginner users, while more advanced learners may self-select to in-person language schools or private tutors that can provide more customized teaching. (This may explain why Duolingo is trying to use AI to do more customized lessons – to attract more advanced language learners).

In addition, Duolingo do not pay these learners and thus cannot control how frequently and how long they wish to use the platform and do translations. Due to the lower quantity and speed of suitable translators, quality and quantity of translated articles would be low, and monetization in this channel would be too slow to meet Duolingo’s high costs and its investor pressure to grow faster.

Furthermore, the translation market is big for certain languages, such as Spanish, but Duolingo must also support languages that have relatively lower commercial value. Lastly, there is a limited market of publishers as more niche publishers in specialized industries would require translators to have domain expertise, and for a longer term strategy in a new market, publishers will eventually want to create original, locally relevant content using professional writers.

Quantopian: the democratization of Wall Street?