Innovation is part & parcel of a B2C retail company, however, digital innovation has accelerated helped differentiate winners and losers even further. The same remains true for athletic footwear brands.

Though the industry started as an oligopoly with Adidas leading the market, over the years Nike has established itself as the fore-front runner (pun intended). Through its focus on innovation in design, manufacturing, distribution and marketing it has continued to focus on the entire end to end process and continue to grow.

Adidas first added its iconic 3-stripe logo following the 1952 Summer Olympics and moved the production of the company offshores to Asia around 1989 after being bought by French Bernard Tapid. Nike was founded by Phil Knight and Bill Bowerman in 1964. The iconic “Swoosh” was first used on Nike shoes in 1971 and the “Just-Do-It” ad ran during a campaign in 1988, often coined as one of the top five ad slogans of the 20th century. 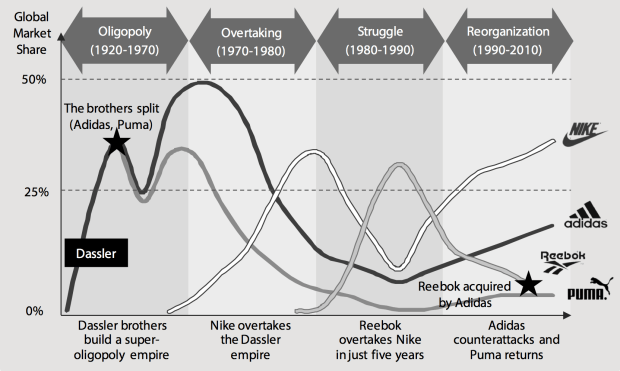 The growing demand for sports, the embrace of active lifestyles, and demographic changes are tailwinds for our business. The market is expected to grow annually by 9.0% (CAGR 2019-2021).[2]

In the 2018 letter to shareholders, Nike states, “People everywhere want to lead healthier lives; in fact, between the U.S. and China, over 500 million people are active at least once a week. On the heels of a thrilling World Cup, and with the NBA’s growing global popularity, passion for sport is surging. Meanwhile, streaming and social media are changing the way we consume sport content—bringing billions of consumers closer to the leagues and athletes they love. And over two billion digital natives in markets like China, India, and Latin America will join the middle class by 2030.”[3]

What makes Nike the winner?

In 2019, Nike launched a new strategy called “Consumer Direct Offense,” which focuses on speeding up the pace of product innovation, speed-to-market, and focuses on increasing direct customer engagement. This investment is supported by the growing direct B2C sales growth as shown below. 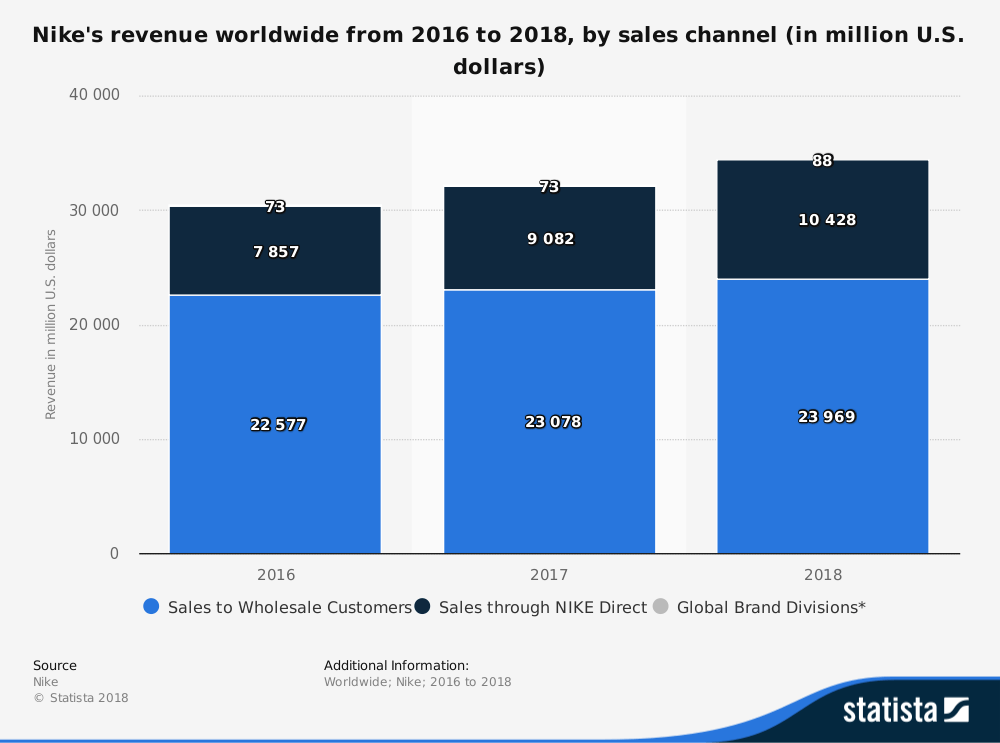 Additionally, Nike focuses on design thinking, prototyping and early corporate buy-in. For example – it took 195 trials before Flyknit Racer was created. Nike Flyknit, yarns and fabric variations are precisely engineered only where they are needed for a featherweight, formfitting and virtually seamless upper. CEO Mike Parker is well known for his focus on innovation.The statistic below shows a revenue comparison of the sporting goods companies Nike, Adidas and Puma from 2006 to 2017.[6] 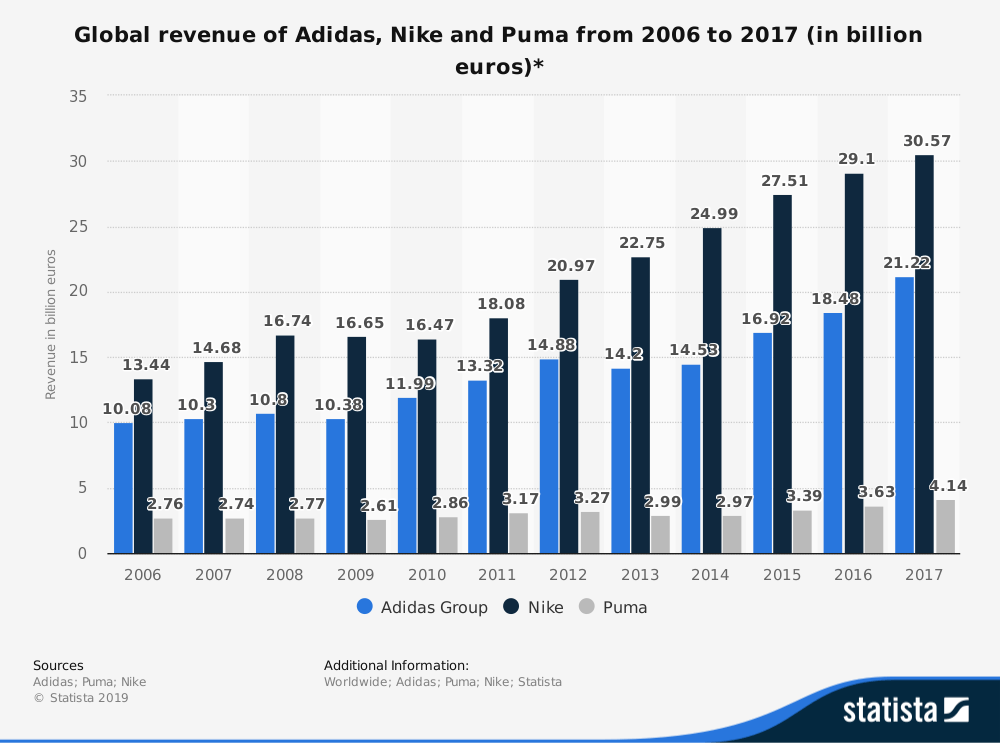 The warning here is that brands like customers can leave, especially for brick and mortar retailers. If they don’t move fast enough to innovate and differentiate themselves to offer value to both shoppers and to the power brands they risk their survival. Nike’s CEO considers the mediocre retail market too unstable to rely on.

Adidas, Puma and others

For the sportswear industry, Nike is opening a new front for competition in sportswear: the best retail experience. Its competitors will have to catch up to meet the standards that Nike is setting when it comes to physical and digital retail through its own and partner channels.”[4]

Additionally, major brands like Adidas need to keep up not just with the product innovation but also speed-to-market especially in the lifestyle category. While Adidas unveiled its 3D-printed offering in 2016, Nike claims it is the first in the world to introduce shoes that has the uppers (the top part of the trainer normally made from fabric) utilize this technology. Adidas was still making sock sneakers in 100 different varieties, even if the market had long moved beyond them. The brand started to produce 3D and 4D-printed soles, but weren’t able to make them at a mass level and hence, the idea never registered at a mainstream level. [7]

Technology has clearly helped Nike boost its standing. To continue to be a winner, a shoe needs to go beyond celebrity endorsements and marketing. The products must take the technology a step further while fitting the lifestyles of shoppers.

Given Nike’s emphasis on innovation, I wouldn’t be surprised if it doesn’t continue to lead in the race.

PillPack disrupts retail pharmacy with medication to your doorstep

Student comments on ‘Just Do it’ with innovation!