“Mechanical Turk” is a term first used in the 18th century to describe a device that appeared to automate chess-playing. Players believed they were playing against an automated machine, but they were actually competing against a human hidden inside of the device (see illustration below). 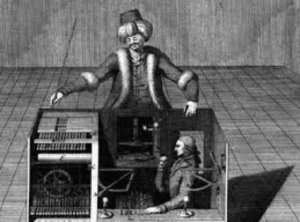 The name has since been applied to Amazon’s platform to offer “artificial artificial intelligence.” Created in 2005, Mechnical Turk, or “MTurk,” connects organizations with individuals (“Turkers”) to perform Human Intelligence Tasks (“HIT”), microtasks that are challenging for computers, but simple for people. For example, a human would have no issue picking an item out of a photo, but it would be very difficult for a computer. Since its inception 12 years ago, MTurk workers are responsible for the foundations of algorithms all around us, leveraged by familiar companies like YouTube and Google, but it has largely stayed under the radar.

As of 2015, it was estimated that MTurk had about 500,000 registered Turkers globally, though it’s unclear how many of those are active. Another report estimates that 500,000 tasks are available daily. As noted, companies often leverage MTurk to train their code, yet most of the tasks are repetitive and mind-numbing. Turkers may be asked to make various faces into their webcam to help an algorithm identify facial expressions. Another HIT may ask Turkers to identify dozens of materials or textures in a photo (e.g. metal, hair, water, wax). Payment terms are dictated by the party requesting the HIT, typically ranging from $0-60 per task. They are also obligated to pay 10% commission to Amazon. A research study showed that 61% of tasks offer payment of 10 cents or less. Turkers are rated based on their completed tasks and can achieve higher status, which in turn gives them access to better tasks. 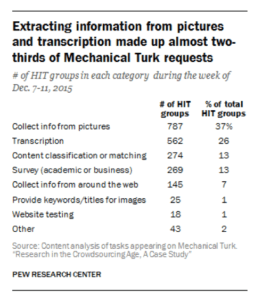 Reviews, identification of “super” workers, commission structure – MTurk doesn’t sound any different from the other marketplaces in the gig economy. So what went wrong? In December 2014, timed around Christmas and posed as Christmas letters sent directly to Jeff Bezos, Turkers organized a public campaign to demand better pay and representation. HIT requesters can pay $0 for a task with no consequence. Turkers wanted Amazon to better educate requesters and the world that they are not all unskilled workers, and thus shouldn’t be paid or represented as such. Some also demanded the ability to review company requesters after completing tasks. Many others complained that they never received payment from Amazon, which was often supposedly lost during transit, but instead received the offer for Amazon credits. Amazon quickly cut off the movement by shutting down the account used by the campaign to verify Turkers. Since then, Turkers have reportedly been leaving MTurk in search of marketplaces that offer fairer pay and terms, though the magnitude is unclear due to lack of reporting on MTurk’s size. 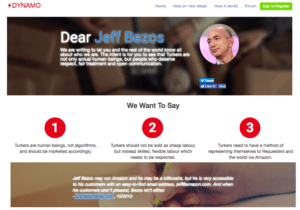 Though Amazon’s MTurk continues to exist and has not yet failed, it’s clear that Turkers are becoming more aware of their collective power. Once isolated from one another and hidden behind MTurk’s platform, Turkers are creating forums to build networks among themselves. Amazon could have avoided the Christmas campaign and negative publicity by setting terms that gave Turkers some leverage on the platform. For example, they should have an opportunity to review companies back. One common issue on MTurk is that task descriptions may be imprecise, so they take much longer or are more complex than expected. If this happens, Turkers have no way of offering feedback to the platform. Amazon should be incentivized to improve this precision because it will lead to greater satisfaction across both parties, requesters and Turkers. They could also ban tasks with $0 compensation, even setting a floor as low as $0.10 would help Turkers to feel relatively more protected.

Alternatives are appearing that favor the workers. For example, a director competitor called Daemo has been created, that offers workers $10 per hour and increased transparency. It is gaining momentum, though it will be interesting to see if they can attract companies used to Amazon’s low rates and flexibility.

Harris, Mark. “Amazon’s Mechanical Turk workers protest: ‘I am a human being, not an algorithm.’” The Guardian, Technology, 3 Dec. 2014. https://www.theguardian.com/technology/2014/dec/03/amazon-mechanical-turk-workers-protest-jeff-bezos.

Student comments on Is Amazon’s Mechanical Turk breaking down?