Launched almost a decade ago as “AirBed & Breakfast,” Airbnb has grown into a $30 billion pillar of the sharing economy. Property owners and renters use it to rent millions of beds, rooms, and entire properties to hundreds of millions of guests around the world. Beyond its core rental service, the platform recently launched Trips, an adjacent “experiences” platform for travelers and enterprising hosts. Reports also suggest that that the firm is building a flight-booking tool to compete with incumbents like Expedia. The firm’s success suggests a vision to not merely create a platform for accommodations, but to “platformize” travel itself.

For guests, Airbnb creates value by providing access to diverse travel accommodations and experiences. Many of these heterogeneous offerings could not be easily sold or discovered in the pre-Airbnb world, though some conventional hotels have begun using the service to market their own inventory. Hosts use the platform to turn spare space or short-term vacancies into extra income, rent out properties full time, or make money selling experiences to visitors. Both sides benefit from the platform’s network effects, and Airbnb captures guest and host service fees on bookings in compensation.

Beyond the transactional features of Airbnb’s marketplace is perhaps a more profound form of value creation: the firm’s focus on trust. Anyone who has received an “A+++++” eBay rating will recognize that platform rating and verification systems have existed for a long time. But inviting strangers into one’s home or staying in an unseen property is a far more intimate experience than buying someone’s old golf clubs. Airbnb’s reputation management system—and system of guarantees when it fails—is crucial for creating value in its network.

The Chicken & The Egg

Of course, networks and trust seldom arise out of nothing, and Airbnb spent years with little traction despite its stint in the vaunted Y Combinator accelerator. To garner attention and raise money, they even resorted to selling election-themed Obama O’s and Cap’n McCains:

Airbnb found a solution in Craigslist’s already-extensive user base and active rental market. Leveraging that firm’s network effects, Airbnb built tools to facilitate cross-posting between the platforms, and ensured that Airbnb-created Craigslist ads would be more attractive and inviting than that platform’s users were used to. Perhaps more “nefariously,” Airbnb also began to automatically email Craigslist posters, soliciting cross-posting on Airbnb. This “growth hacking” method may seem underhanded, particularly in light of CTO Nathan Blecharczyk’s history of profiting from email spam. But it appears to have worked, feeding Airbnb’s “flywheel” of growth that it has ridden to a nosebleed valuation. 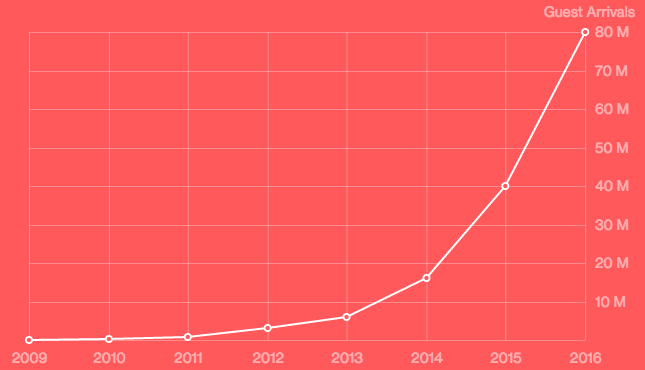 While listing properties and searching for accommodations on other services sounds straightforward, Airbnb’s “ownership” of trust is a powerful incentive for buyers and sellers to stick with one platform. Using a new travel platform to rent one’s home or find a place to sleep entails real risks to property and safety; contrast that with browsing and purchasing from a new “daily deals” platform, which entails little cost or risk (and may partially explain Groupon’s struggles). Minor frictions of multi-homing (managing multiple calendars, payment methods, etc.) aside, once one has established trust in Airbnb’s platform, they have a powerful reason to remain in its network.

Despite Airbnb’s advantages, several questions remain about the firm’s prospects and scaling ability. As shown, trust mechanisms deter vandalism and theft; after all, guests want to be trusted by prospective hosts. But these systems have failed in other ways: minority guests have documented several cases of apparent racial discrimination by hosts or their neighbors. This phenomenon may block many from booking (let alone rating) properties in the first place: HBS researchers have found evidence of discrimination against prospective guests with African American names. These effectively represent “negative” network effects, where the platform’s decentralized nature enables participants to harm or deter others, rather than transact with them. Airbnb has taken steps to combat discrimination; time will tell if they prove effective.

Further, Airbnb’s ability to capture the large and lucrative business travel market remains uncertain. The firm has lagged other platform players like Uber in claiming wallet share from incumbents, though recent trends are promising. Firms staffed by frequent business travelers employ support staff and enforce purchasing policies that favor major hotel brands with standardized offerings and dedicated B2B marketing efforts. It remains to be seen if Airbnb can compete for this market with its current host base. Perhaps the firm will need to solicit more traditional hotel listings (and thus share value with incumbents) to compete.

Finally, Airbnb has faced a litany of regulatory roadblocks, recently culminating in highly-visible legal battles with San Francisco and New York. Politically-powerful incumbent firms and activists concerned with urban livability and affordable housing have raised barriers to Airbnb’s expansion the world over. The firm will likely fight many such battles as it scales, particularly in gentrifying urban areas with rising home prices. But given the value that it creates for users, Airbnb may succeed by tapping its devoted platform participants as citizen lobbyists (à la de Blasio’s Uber).

Challenges aside, Airbnb has built a lucrative and devoted platform of travelers and hosts. When properly nurtured, network effects and the firm’s ownership of trust will likely constitute a durable competitive advantage, making Airbnb a platform to watch in the future.

Student comments on In Airbnb We Trust