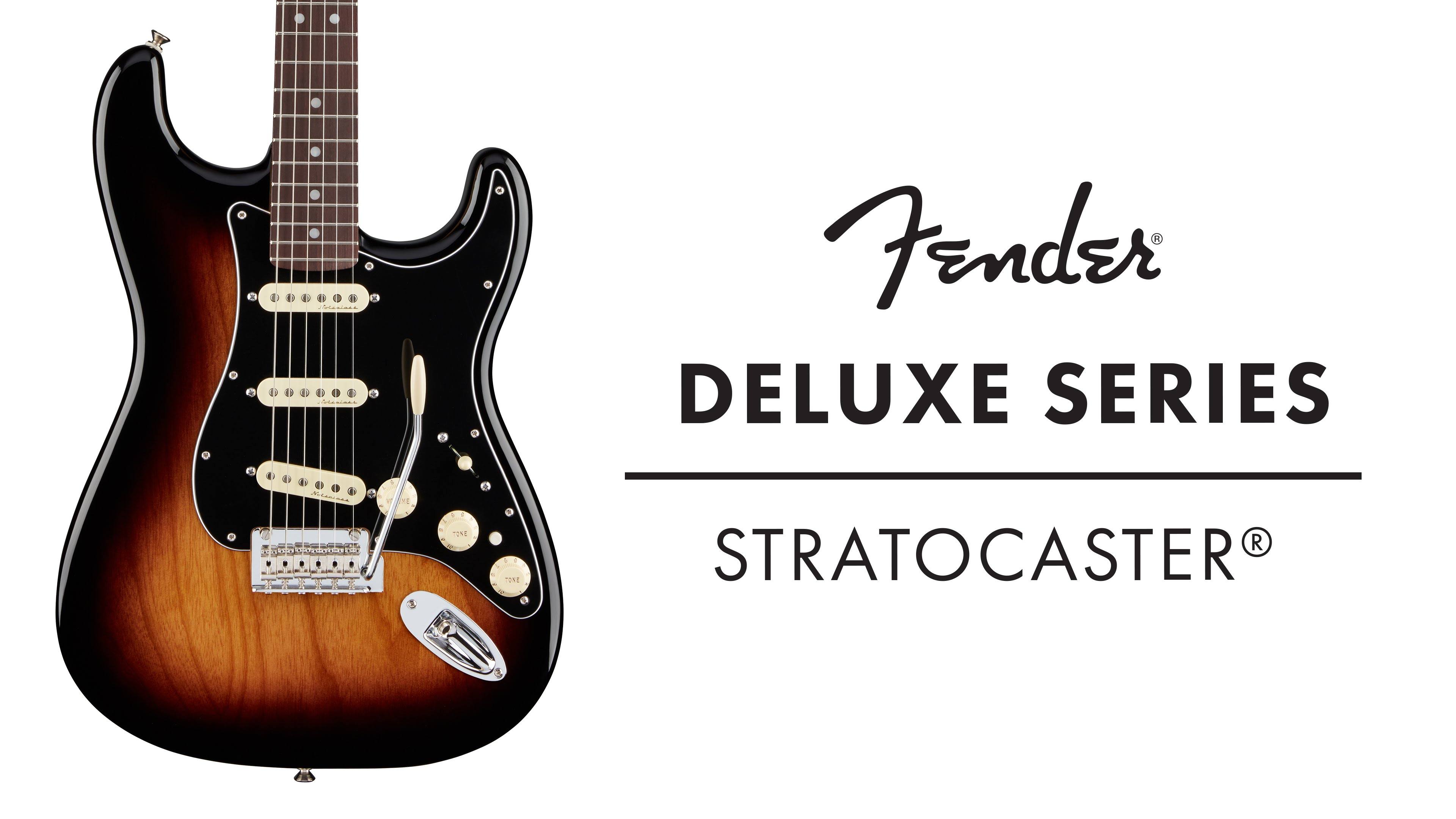 Fender is one of the two preeminent guitar companies in the world. The Fender Stratocaster was made famous by artists including Jimi Hendrix, Eric Clapton, David Gilmoure, John Lennon, and many others. Since debuting in 1946, Fender has helped transform many genres of music including Rock N’ Roll, Jazz, Country, Pop, and more. In the last 15 years, the rise of EDM (Electronic Dance Music) and other genres such as hip hop have diminished the prominence of the electric guitar as the key instrument behind radio hits. In 2013, Forbes magazine published an article entitled ‘The Demise of the Electric Guitar’ which stated that as EDM has increased its presence on the Top 40 charts, guitar sales have been dropping (1). Evidence of this trend is industry wide: GuitarCenter and Gibson Guitars ( The Pepsi to Fender’s Coke ), are both reportedly at risk of filing for Chapter 11 bankruptcy (2).

There are a few notable trends in the music product industry which help paint a context of Fender’s current situation and its strategies for digital transformation:

All hope is not lost. “According to The Music Trades magazine, though, the $7.4 billion market for all new instruments and music gear has actually been growing since the recession years of 2008 and 2009. Last year retailers sold $1.9 billion of new fretted instruments (mainly guitars) and related gear, up 8.9% from 2016.”(4) Much of this growth has come from increases in product sales through online channels. Secondly, In 2015 Fender named Andy Mooney as their new CEO with a stated focus of using digital innovations to keep Fender competitive. (5)

When Mooney started, he immediately charged Fender with gathering unprecedented customer data to look for opportunities to increase sales and leverage digital transformation. In an interview with Forbes, Mooney summarized the key findings (4):

These findings provided Fender with important strategic insights. Mainly, the guitar industry faces a churn issue of 90% for new product users. However, users who stick with the instrument have a large lifetime value to Fender (often moving from a $200 instrument to multiple pieces of equipment running in the thousands of dollars). These insights also lead to a simple conclusion, “Even a slight improvement in that 90% abandonment stat could lead to a meaningful boost in sales of Fender guitars and amplifiers. Even a 10% increase in the number of beginners who stick with it, Mooney says, could double the size of their hardware business.”(6) Secondly, online provides a safer forum for females to engage with guitars due to their reluctance to spend time in a brick and mortar guitar store.

In order to capitalize on these learnings and implement digital transformation strategies, Mooney started recruiting well known music tech leaders into senior management. With this new team in place, Fender doubled down on the music lesson space by introducing Fender Play. 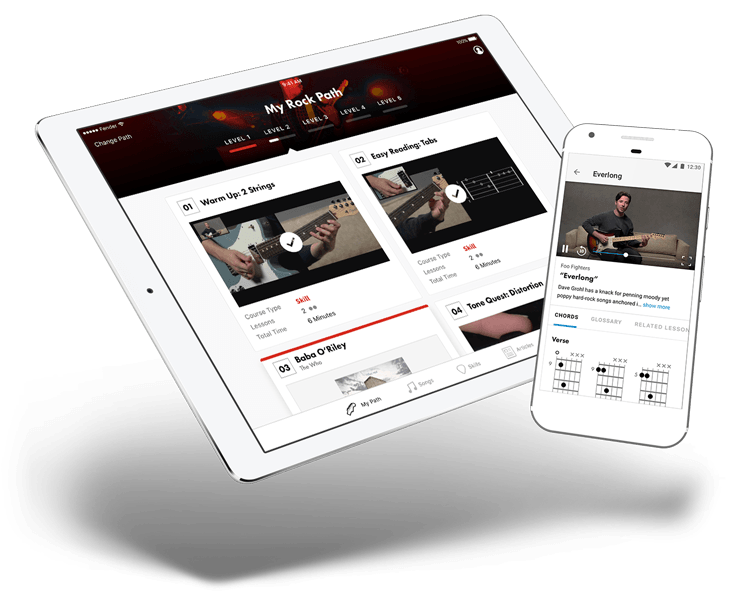 Fender Play is a comprehensive online music lesson platform which aims to increase the likelihood of success of a beginner. For $9.99 / month, users have access to a comprehensive set of song tutorials, lessons, chord instructions, and much more (7). Every video and exercise is filmed in high quality to make the learning interactive and easier to grasp. Fender Play is also based on musical preference, so a beginner receives customized lessons and tutorials based on the type of music they want to learn how to play.

In order to build Fender Play, Fender needed to develop an entire new set of organizational competencies in music education and software development. “With the help of a committee of PhDs from schools like the Musicians Institute in Hollywood and the Thornton School of Music at the University of Southern California, Fender designed what it calls a “micro-learning” strategy designed to cater to modern learning styles with a research-backed, personalized pedagogy. (6)” Secondly, the company needed to repurpose its mission and motivate its organization accordingly. “We’ve catered to the needs of the accomplished player for seven decades, says Mooney. “We’ve built guitars for Eric Clapton, Stevie Ray Vaughn, Jimi Hendrix. We never really concentrated on those 45% of players who buy a guitar for the first time every year.”

Despite positive reviews (8) for Fender Play, there are still considerable risks Fender faces in their current digital transformation strategy. First, the online music lesson category is a crowded space and has many free alternatives, most notably YouTube. The search for ‘Beginner Guitar Lessons’ returns 1,980,000 results and there are already numerous YouTube channels dedicated to lessons. Therefore, Fender needs to build a strong enough competency in music education and app quality to justify the $9.99/month price point. It is no secret that the goal of this initiative is to reduce the 90% churn, so one recommendation would be to grant a one year free subscription to customers who purchase a Fender guitar or amplifier. This strategy can generate loyalty, give Fender deeper insights into their customers, and can create opportunities to sell more Fender products.

Secondly, Fender’s digital strategy is beginning to move beyond software apps and into technological improvements to their equipment. As an example, Fender recently launched a ‘Fender Mustang GT Series” of guitar amplifiers that are bluetooth / wifi enabled (9). These amplifiers can connect to a Fender app which allows users to change tones, and manipulate the amplifier in other ways. Beginning to transform the hardware of Fender products to utilize digital technology is a fragile and risky proposition. This problem illuminates one of the largest fundamental challenges that Fender (and the entire guitar industry) faces: appeasing the ‘purists’ while still innovating. 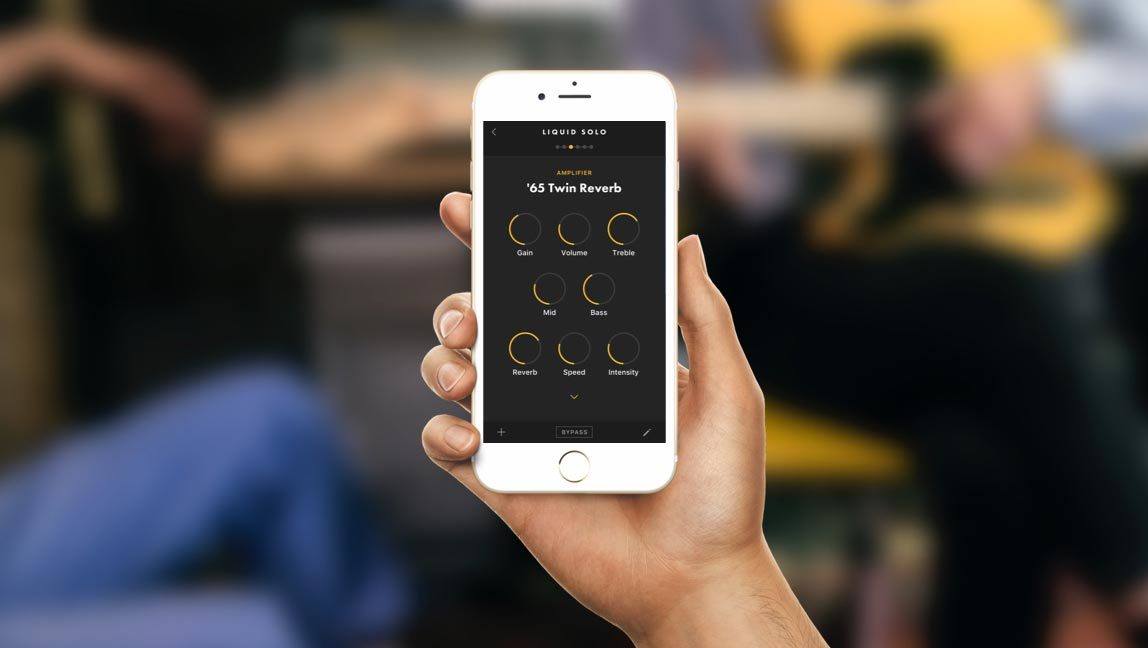 A case study best illustrates this point. In 2007, Gibson Guitars (Fender’s largest competitor) introduced the Robot Guitar (renamed GForce): a guitar that automatically tuned itself when a user strummed the strings. 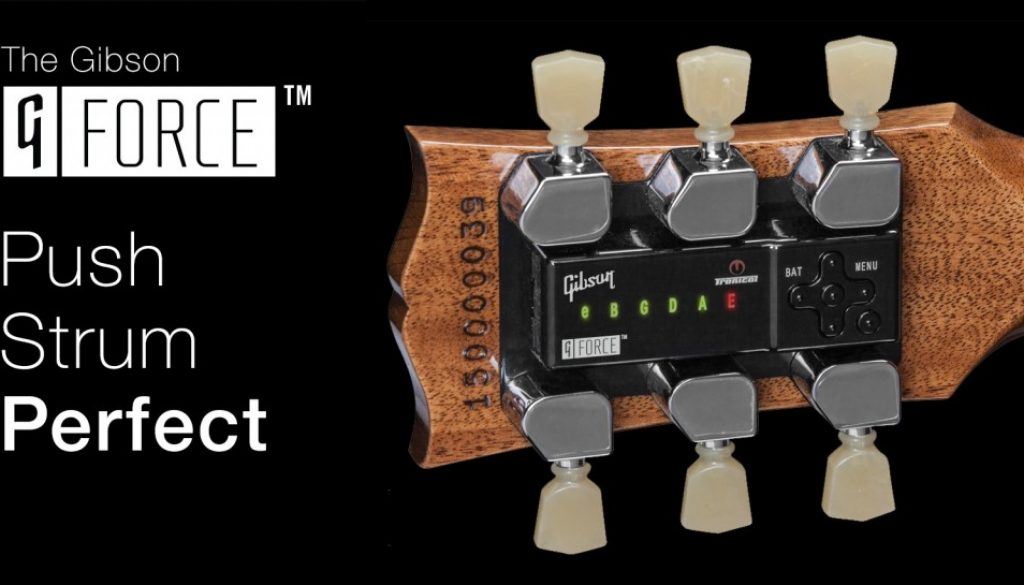 One can imagine why Gibson thought this technology was a good idea. Tuning is a constant task required for guitar playing, and Gibson had a technology to automate the process. Quickly, Gibson added G-Force to every new guitar it was releasing (removing the ability of a purchaser to decide if they wanted it) and consequently raised prices (10). The uproar from the guitar community was overwhelming negative. “After unrelenting pages and pages of negative comments and reviews from guitarists worldwide, and severe pressure from Gibson dealers who threatened to stop selling the guitars unless changes were made, Gibson reverted back to 2012 specs on their product line and dropped prices back to a lower level.”(10) The paradox for guitar companies is that younger players are more likely to embrace technologies, however, older guitar players are more conservative and are still the largest consumer of high end guitars.

There is another key question that Fender will be forced to decide during the digital transformation underway in music performance. Namely, is Fender a high-quality guitar product company or a high-quality music product company? The distinction is extremely important given emerging trends in the music product space. In doing so, how will Fender manage its purist core base against younger musicians looking to utilize technology? Over the past few years, interesting new fully digital guitar products have been gaining traction in the market. 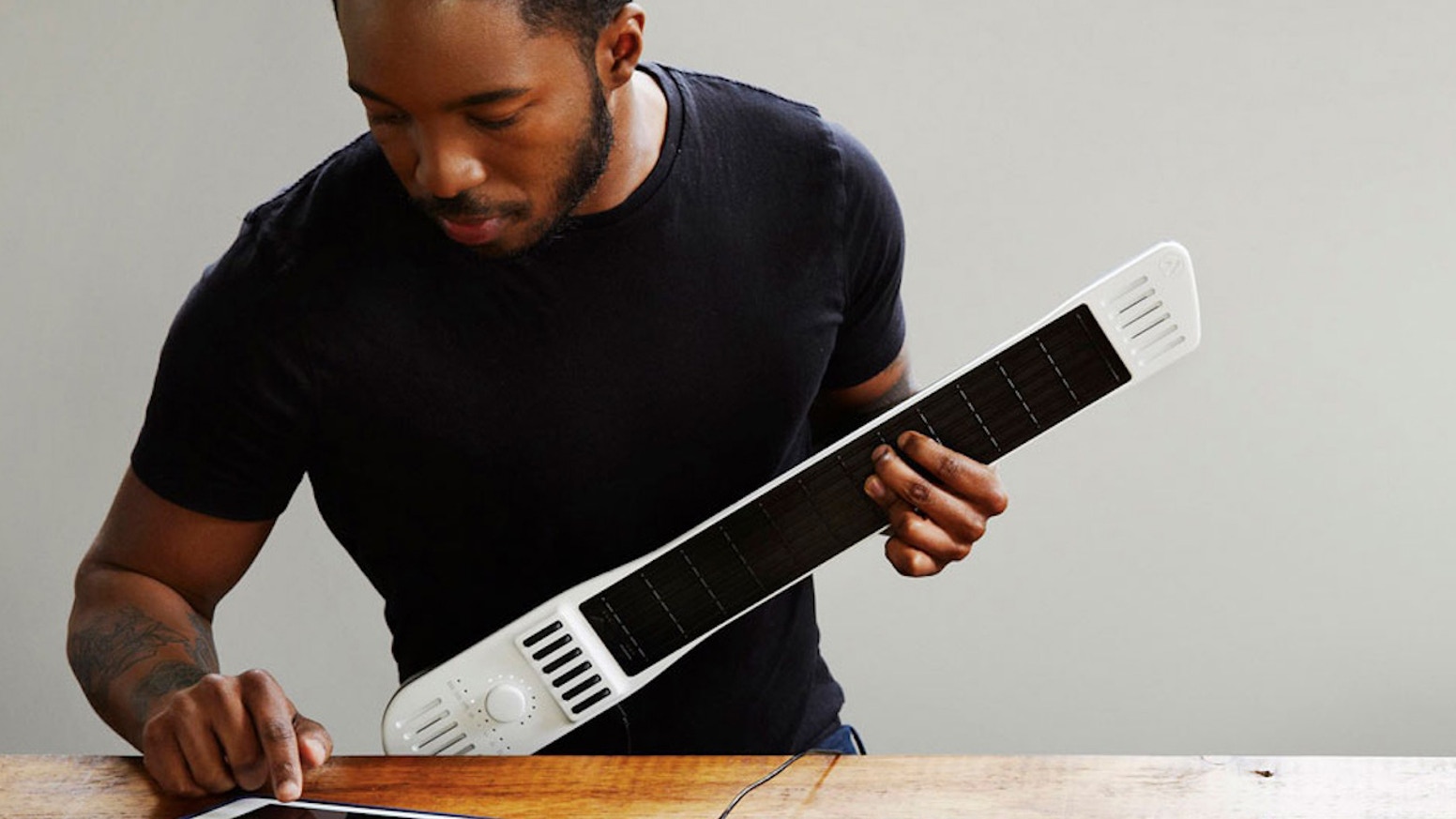 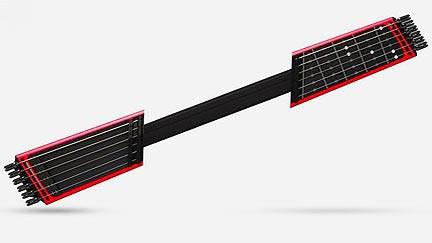 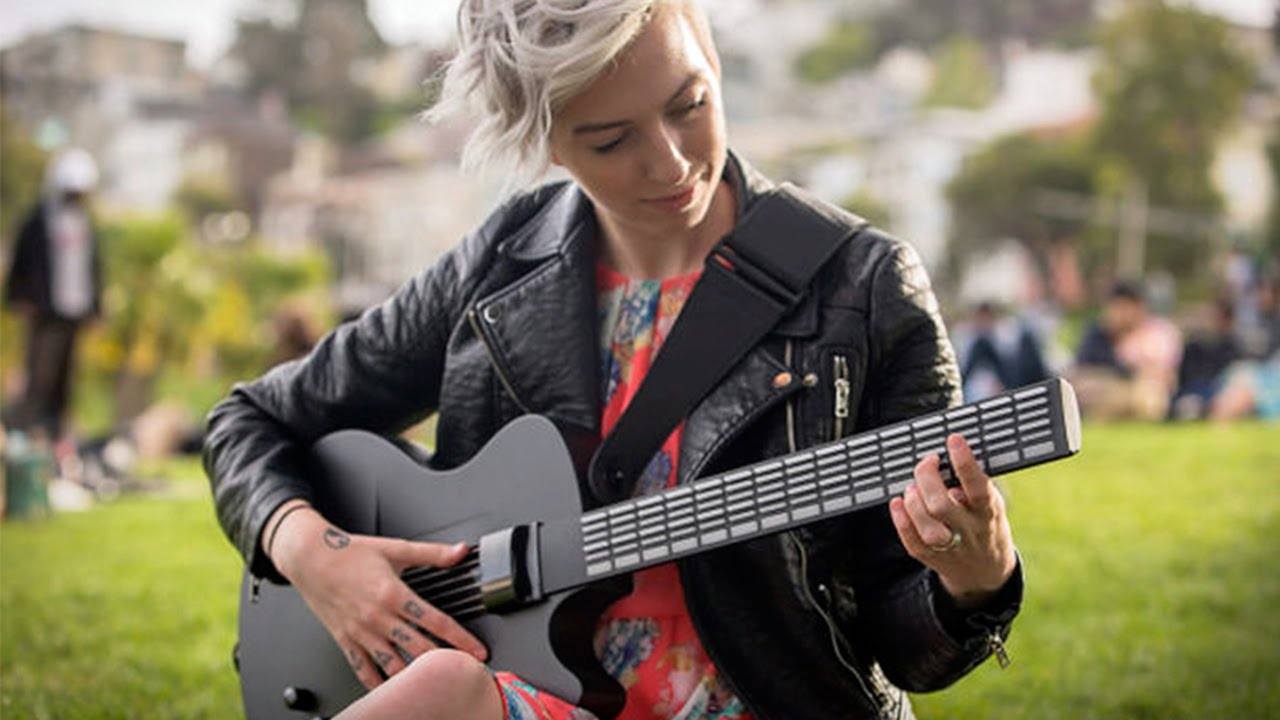 Technology is creating opportunities for musicians to make music and be creative in entirely new ways. However, these same transformations have created a unique challenge for a company like Fender. The 72 year old company must rapidly develop competencies in new areas and balance the demands of ‘purists’ with younger technology seeking consumers. Fender Play is Fender’s first real march into a category outside of its main domain expertise but cannot be the last if the company hopes to stay relevant in this rapidly changing environment.

Student comments on Fender Guitars: Can the Electric Guitar Make a Comeback?