In 2010 Amazon created an in-house production unit, Amazon Studios, to facilitate the creation of original content for Amazon.com.[1] While initially focused around crowdsourcing content from amateur content producers, actors and creators, amidst heated competition from Netflix, come 2012 the company adjusted its strategy. Amazon began producing premium original television content crowdsourcing feedback from its’ customers on the free pilots they publicly released to ultimately determine which shows would get the necessary funding to be made into a full series.[2] While TV producers often seek out formal customer feedback before greenlighting a show, this is one of the first times this process has been both democratized and digitized. 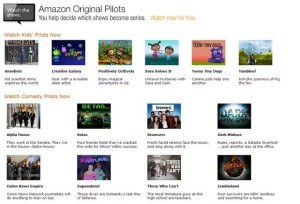 In order to incentive crowd participation, Amazon gives its users free access to sample content and pilots that they are considering greenlighting. They then encouraged their customers to provide feedback, ratings, commentary, and even create hashtags describing their feelings towards the content. Essentially, Amazon is “the first studio with ratings for its shows before they’re really ‘shows’.”[3] I believe customers are drawn towards participating in this crowdsourced feedback system for three primary reasons:

Amazon Studios creates value for Amazon through creating premium content only available to Amazon Prime subscribers. Amazon Prime subscribers are Amazon’s most valuable customers, spending more than double on the site than what non-members spend.[4]  A 2014 RBC Capital study found that Amazon Prime US members spend an average of $1,500 per year, compared to $625 for non-members. I believe that Amazon intends to capture value through its original content by converting more subscribers to Prime customers. Since these customers have proven to be of significant value to the company, this is how Amazon will cash in on its original programming investment. 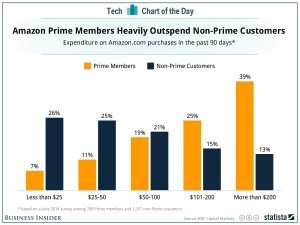 Some critics of Amazon question whether consumers really know what they want after viewing a pilot. For example, Star Trek: The Original Series was initially unsuccessful; it was only until its syndication that is became a cult hit.[5] There are many additional examples like Star Trek, such as Seinfeld and Cheers, that didn’t become wild successes until after they spent time on the air for a while. One could question the negative impact on content choice and availability that adding such deep customer feedback so early on in the process might have.

Amazon Studios has huge growth potential. In the 67th Annual Primetime Emmy Awards, Amazon had 12 nominations and even picked up their first award for best directing in a comedy series. This helped Amazon rank 12th overall among nominated networks and platforms.[6] Furthermore, Director of Amazon Studios, Roy Price, says that the audiences have been responding well to their feedback-driven process[7]. While Amazon is very tight-lipped about their actual viewership as well as their number of Prime memberships, analysts estimate the company has anywhere between 30-50 million Amazon Prime subscribers. Perhaps their foray into original content is working after all… 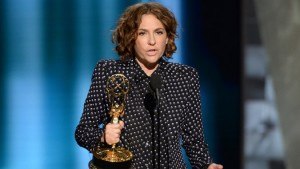