In the last few years smart assistants have been getting a lot of attention as the tech giants compete for share of voice. Apple was one of the first to market with Siri, but they kept their AI platform closed and limited Siri to the role of voice assistant on your iPhone and later other Apple devices. When Amazon launched the Echo smart-speaker in 2014, they also introduced the world to Alexa. Alexa is now in 6MM homes or approximately 5% of American households[1].  Unlike Apple, Amazon moved Alexa beyond the Amazon ecosystem by opening it up to third party (3P) software developers who can add “skills” (the equivalent of apps) to Alexa, and it has opened it up to hardware developers who can incorporate Alexa into their products. Amazon thus improved upon the concept of a smart assistant aand turned it into a smart platform through which users can not only access Amazon (e.g. shopping, PrimeMusic, etc), but also the programs of third party developers and companies (e.g. Uber, Dominos, etc). 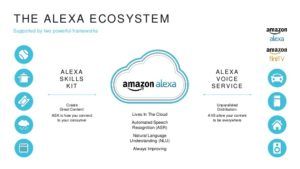 There are clear indirect network effects on Alexa and other similar open voice platforms as users will choose which platform to use based on how many features are available to them regardless of whether these are first party (1P) or 3P. With over 7,000 skills Alexa is definitely ahead of the game, but there is the potential for multihoming for these developers as well as the appeal of proprietary apps (such as Gmail and Google Calendar currently) that Amazon cannot currently access. Voice platforms in general present an interesting dynamic whereby customers will make purchasing decisions based on how smart the assistant is, how good the 1P and 3P features are, and how accessible the platform is via different media such as mobile, smart speakers, TVs and other devices.

To date, direct network effects are not very significant on Alexa as one user only cares whether others are using Alexa insofar the volume of users makes Alexa smarter. However, reports that Amazon and Google are considering integrating communications capabilities into their smart speakers could increase the importance of direct network effects in the future [2].

Multihoming is a defining characteristic of voice platforms in the current form since the smart assistants are predominantly confined to certain types of hardware. For example, an Echo owner probably owns an iPhone or Android phone so they are using at least two voice assistants in their daily lives. Nevertheless, multihoming has its limit on voice. Early adopters today may be comparing technologies and thus buying multiple devices, however as voice becomes more mainstream, customers are unlikely to own both an Echo and a GoogleHome.

By opening up Alexa to other hardware manufacturers Amazon is directing more people to its platform as Alexa gets built into more and more non-Amazon devices and appliances. To this end, Amazon recently partnered with Intel to make it easier for manufacturers to include Alexa-enabled speakers in their devices[3].

In addition to addressing device constraints, Amazon should also be looking for ways to increase user stickiness via proprietary use cases. One clear example is Amazon voice shopping which is not available via Siri or GoogleHome.

Alexa creates value for the customer by continuously improving upon a “voice-first” experience whereby tasks such as listening to music, household organization (timers, calendars, shopping lists, etc), home automation and shopping on Amazon require less effort and thus free up time in the user’s life for other activities. It is still unclear how and if Amazon plans to directly monetize Alexa, however since launch, the voice platform has helped to drive the Amazon flywheels of Prime and Marketplace as users can shop on Alexa and Prime members enjoy more benefits on Alexa.

Voice platforms, Alexa included, are still in their early days and so far the existing products have only scratched the surface of the industry’s potential. Many hypothesize that voice will become the next computing platform which would open up countless more possibilities for creating and capturing value both for the platforms and the complementors of those platforms. 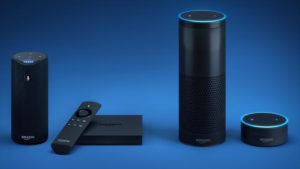 Snapchat, a “camera” for Gen Y and Z?