Legendary Pictures, an American film production company based California, was founded in 2000 and was the first major movie production company backed by Wall Street investors, and as a result, distinguished itself in terms of operations and strategy from other Hollywood studios. A notable differentiator is its focus on data analytics and employment of innovative online technology. More specifically, Legendary emphasizes the use of data analytics to create more effective and efficient digital marketing through a process that identify, understand, reach, and persuade online consumers to purchase its movie tickets.

Legendary began its data analytics group with the acquisition of software company StratBridge, founded by Matt Marolda. Marolda then assembled the team from a variety of talents to include a Harvard astrophysicist and experts in dynamic pricing of the airline industry. The group is further divided into 3 teams. First, the “Quant” team, consisted of mostly PhD’s in physics and mathematical sciences, are the ones who harvest and analyze the data using advanced algorithms. They Quant team developed an array of algorithms such as text analysis and user preference indicators, and then apply them to the native data acquired from source providers such as Google, Twitter, or Facebook.

Next, the “Dev” team, are the software developers that create easy to understand API’s for the outputs from the Quant team. As a result, someone without the knowledge of the advance mathematics used in the Quant team could use the interface and find out whether certain Facebook user will like the upcoming horror movie made by Legendary. Finally, the “Strategy/Marketing” team, using the API designed by the Dev team, constantly monitors the data inflow and allocate marketing budget continuously based on change in that data; they are sometimes described as a “day-trader” of marketing capital.

The primary means of Legendary analytics’’ value creation lies in its improved effectiveness on movie marketing.  The traditional Hollywood marketing approach segments consumers into just four types: men or women; 25 years or younger/older. Within each of these segments, the traditional Hollywood firms spends large amounts of marketing spending that attempts to identify a specific group and then cover everyone within that group. The result is tens of millions of dollars being spent on marketing in a “spray-and-pray” fashion; for the big blockbusters, the marketing budget could account to nearly half of the entire production cost. 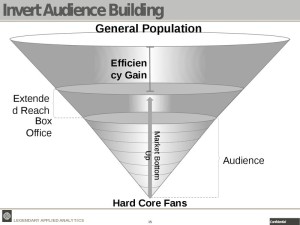 Legendary, on the other hand, breaks down the four groups of millions of people into millions of groups of mini customer segments and analyze each groups’ decision making process in regards to their movie consumption habits. The results are then applied in a more targeted and systematic manner, forgoing spending on the hardcore fans (they will see the movie regardless) or those that will never go see a certain movie, and instead focusing on those who are still on the fence to incrementally increase marketing spending on these users. The result is a more efficient allocation of marketing budget to convince the right kinds of customers, enabling Legendry’s shareholders to capture more value in terms of cost reduction. For example, for the 2014 blockbuster “Godzilla”, Legendary was able to spend almost $30 million less domestically to achieve similar levels of box-office sales compared to traditional Hollywood comparables. 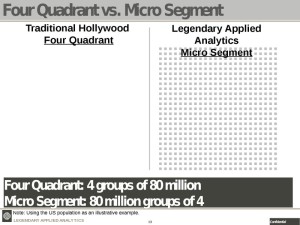 Looking ahead, Legendary is still further refining its analytics capabilities to further increase its effectiveness and cost efficiency. Furthermore, there are a few other opportunities that the analytics group could pursue to create and capture value. The first is the use of data in content creation. Similar to Netflix and Amazon Studios, where data on consumers could be gathered and analyzed to guide the company in creating the next movie, to include attributes such as genre, cast, and plot structure. The value created is a movie that will be more in-demand by the audience with value captured in greater ticket sales. The second opportunity Legendary could pursue is to outsource its software system as a service to other Hollywood production houses. Currently, most of the Hollywood studios are behind in terms of their digital marketing and data analytics capabilities, losing ground to the tech giants like Netflix and Amazon. Building such an internal team will be hard and long (it took Legendary 4 years), and Hollywood may not never catch up with its tech rivals. Therefore, Legendary could create value for them by providing an immediate service for the traditional studios and capture value as recurring revenue by providing this service to them in the long term.

Student comments on A Legendary Approach to Data Analytics