While there is considerable divergence of opinion around when or how autonomous vehicle (“AV”) technology will manifest in everyday life, preliminary research has emerged attempting to quantify AV’s potentially major economic implications. In a world with driverless technology, few industries will be transformed as significantly and directly as on-demand ride hailing services. Currently, the largest cost component for ride hailing businesses is driver commissions, which are estimated to represent 80% of sales.1 A fully driverless world, however, would render drivers obsolete. As such, ride hailing businesses would need to transform the focal point of their supply chains from sourcing drivers to sourcing autonomous vehicles capable of transporting passengers on-demand.

For Uber – the global ride hailing leader, with a valuation greater than $60 billion and more than 70% U.S. market share – there are opportunities and challenges inherent in this potential supply chain digitization that will likely determine the long-run fate of the company.2,3

The expected benefits of AV make clear the tremendous opportunity on which Uber stands to capitalize through successful AV integration. Recent studies from the OECD and the MIT Artificial Intelligence Laboratory used algorithms to simulate transportation systems providing AV ride delivery. These studies concluded that – in a fully driverless world – the number of cars required to serve public transportation demand in cities could decline by between 70-90%.4,5 Fewer cars on the road would reduce traffic congestion, accidents, and overall transportation costs. Due to more efficient transportation systems and the elimination of driver commissions, experts believe that AV advancements could reduce costs in ride hailing business models by as much as 80%.6

The emergence of AV technology, however, cannot be considered unambiguously positive for Uber. Given AV’s far-reaching effects, the entire automotive value chain has begun competing in an arms race to develop AV technology. Uber’s most direct competitor, Lyft, for example, launched an AV-focused division and forged partnerships with Google, GM, and AV technology startup Nutonomy to accelerate its driverless capabilities.7 These partnerships have borne fruit and put the Lyft cadre squarely in front of the AV race, as just last month Google became the “first to put truly driverless vehicles on to public streets.”8

Perhaps even more concerning for Uber than Lyft’s recent successes are the resources being deployed into the market by large-scale automotive players. GM’s internal AV segment, for example, recently introduced a beta version of a ride hailing application that is servicing customers with semi-driverless vehicles.9 Beyond GM, AV technology development has become a universal element of R&D spend in the automotive industry and, as Figure 1 below demonstrates, the number of cars and companies testing AV in Silicon Valley has increased dramatically in recent years. 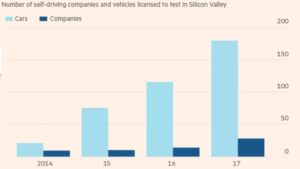 While the competitive environment in the quest for driverless technology has intensified, Uber has created its own internal segment, the Advanced Technology Group, to focus on driverless technology development. To enhance these efforts, in September 2015, Uber announced a partnership with Carnegie Mellon University, whereby the company would collaborate with the Robotics Department on AV technology.11 Moreover, in 2016, Uber acquired startup company Otto – with proven AV technology capabilities – for $600 million.12 And, similar to Lyft’s strategy of creating OEM partnerships, Uber announced an agreement with Daimler and Volvo this year to source their autonomous vehicles for its platform, once they are in-production.13,14 Figure 2 below provides a depiction of how Uber’s AV alliances stack up relative to its key competitors. 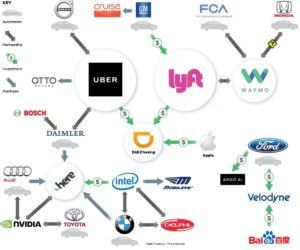 Thus – through internal segmentation, research partnerships, M&A, and supplier partnerships – Uber has taken major steps in working towards an AV solution. It is clear, however, that significant work remains until Uber will be able to offer a commercially viable AV service. Experts believe that software will be the major production bottleneck for fully driverless vehicles. AV Software enables object analysis, decision making-systems, and fail-safe mechanisms, all of which are critical to full driverless-ness.16 Given software’s linchpin nature, Uber should consider partnering more closely with or acquiring businesses that specialize in AV software.

Moreover, given uncertainty in when AV will propagate, Uber must prudently allocate resources to AV development while continuing to nurture and grow its existing ride hailing network. Ride hailing accounts for 4% of all miles driven today and is expected to account for 25% of all miles driven by 2030.17 The ride hailing market growth opportunity is massive, and Uber must balance investing for future disruption with maintaining its dominant position in the current paradigm.

While it’s clear the industry has geared itself toward driverless-ness, major open questions remain for Uber’s AV transition. In a driverless world, for instance, Uber will need to consider the business model implications of owning a fleet of AV’s or sourcing them from third parties. Additionally, contending with strong populist crosscurrents, Uber must determine how to rationalize AV’s mass elimination of lower-skilled jobs to communities, governments, and societies more broadly.

12 From zero to seventy (billion). https://www.economist.com/news/briefing/21706249-accelerated-life-and-times-worlds-most-valuable-startup-zero-seventy

16 Heineke, Kersten. “Self-driving car technology: When will the robots hit the road?”. McKinsey.

Student comments on “Your Uber Robot Is On the Way”: The Transformation of Uber’s Supply Chain in a Driverless World