Global internet penetration rates are approximately 46%, representing 3.4 billion total internet users (1). This number is expected to grow nearly 21% by 2020 to 4.1 billion internet users (2). Delivering content to this enormous and growing number of people requires substantial data center capacity. Data centers are essentially warehouse facilities with numerous rows of servers that enable access to digital information. A key value proposition for data centers is the provision of power for servers coupled with the cooling systems required to regulate server temperatures. Providing these services consumes significant energy. The importance of electricity to data center operations is highlighted in Equinix’s 2016 Form 10-K. Equinix (NasdaqGS: EQIX), a company with a ~$25 billion market capitalization and one of the largest publicly traded data centers notes, “to the extent we incur increased electricity costs as a result of either climate change policies or the physical effects of climate change, such increased costs could materially impact our financial condition, results of operations and cash flows” (3). Utilities are so meaningful to data centers that many have been developed in naturally cooler climates such as Iceland (4). Large data center owners and customers include the likes of Google, Facebook, Netflix and other data-rich media companies, all of whom have an increasing requirement for anytime, anywhere and any device interconnection. In the coming years, growth in internet usage and demand for data-intensive content will translate into a greater need for electricity, and this has obvious ramifications from a climate change perspective. 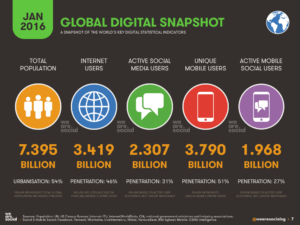 One Company driving electricity demand in the internet technology space is Google, and it has taken an extreme approach to its energy policy. Google has stated that “our goal is 100% renewable power” and has “committed to invest $2.5 billion in renewable energy projects, which produce enough electricity to power one million US homes”. For example, the Company recently invested in a $75 million wind farm near Amarillo, Texas and plans to partner with Invenergy, a developer, builder, owner and operator of power generation and energy storage projects in North America and Europe, on a new 225-megawatt facility (5). To date, Google has made considerable progress in reducing their carbon footprint. Their initiatives have removed an equivalent of one million cars from the road in terms of reduced greenhouse gases (6). Google has done a fabulous job leveraging its financial resources to advance their renewable energy goals internally, but they could likely do more to influence energy usage at the consumer level.

Given that Google is monopoly-like in many of the markets it participates in, including online search where it has ~75% market share, they can and should take a leadership role in encouraging consumers to modify their use of technologies that consume energy (7). Google is in a disproportionally strong position to educate and raise awareness about how using technology impacts the environment. One way they can do this is by informing people that that pulling out laptops to use Google Maps, check Gmail and the like is contributing to climate change – that accessing these technologies requires the use of utilities.

While it can be argued that Google could do more to combat climate change, their bold, public goals for renewable energy demonstrate that reducing their carbon footprint is a key priority. Many folks have claimed that Google’s self-driving car will ultimately lead to lower levels of CO2 emissions, with some estimates calling for fuel efficiency improvements of more than 50% for cars and trucks and 90% reductions in carbon emissions when personal cars are replaced by robo-taxis (8). It will be interesting to see which initiative, Google’s self-driving cars or Google’s renewable energy commitment, will have the greatest impact on lowering global greenhouse gases.

From Oil to Carbon: How Global Energy Trader Moved Into Carbon Emissions Trading

Intrawest: In Search of Snow

Student comments on Your Google Searches Are Contributing to Global Warming