1,545 million metric tons of CO2 were emitted by the U.S. motor industry in 2015, equivalent to 29% of total U.S. energy-related CO2 emissions for the same year[1]. The widespread agreement that these increasing numbers can lead to severe global consequences has prompted some motor companies to take important measures.

At the same time, congestion charges in some cities, uncertainty in fuel prices and environmental consciousness are some of the reasons that lead consumers to think about other means of transportation to avoid the traditional gasoline-powered vehicles.

We have witnessed the introduction of electric cars by recently founded automakers such as Tesla or by long-established ones such as BMW or Honda. However there has been given little attention to the use of electricity in motorcycles, which are a common means of transportation in several countries.

Figure 1: Percentage of households that have a motorcycle/scooter[2] 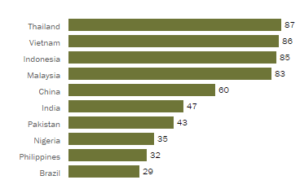 Yamaha Motor has been one of the first well-known motorcycle manufacturers to identify an opportunity within the electric motorcycle industry, which is still barely known in most countries.

The 61-year-old Japanese motor company announced during the 44th Tokyo Motor Show in November 2015 that it would introduce two models -PES2 and PED2- of electric motorcycles in 2016[3].

The electric motorcycles present several advantages for the riders when compared to the traditional vehicles. These benefits include, among others, near-instant acceleration, not needing to go to the gas station, no oil, no exhaust and simpler machinery. And, what’s more, prices are similar to the ones set for traditional motorcycles.

The release date of the Yamaha motorcycles is yet to be confirmed but the company is sticking to the plan that it proclaimed six years ago: to lead the electric-motorcycle segment by 2020[4]. Following its Yamaha Motor Group Environmental Plan 2020, the firm seeks to increase environmental attractiveness by thinking about product development from the perspectives of the environment and customers[5].

But how does this plan fit with its traditional gasoline-powered (and high CO2-emitting) motorcycle business? Are the two types of motorcycles going to compete within the same company?

Apart from the above posed question, there is another element worth addressing: the potential scalability of the product. Other companies such as Zero Motorcycles, Harley-Davidson or BMW have already released similar electric-motorcycles, but none of them has created sufficient awareness so far. On the contrary, electric scooters –small motorcycles designed for short distances- have been successful in China, leading the electric scooter sales, with 9.4 of the 13 million units sold worldwide in 2013[6].

Nonetheless, there are several other elements that the Japanese company could tackle to boost its electric motorcycle sales.

First, Yamaha could more broadly advertise both its Environmental Plan and the release of its two electric motorcycles. This would attract not only environmental conscious people but also current or potential Yamaha customers eager to try the new models.

Second, the firm could evaluate the possibility of entering the electric scooter market, which has proven successful in China. This type of motorcycle, due to its low price and its high reach in many countries -as seen in Exhibit 1- could allow Yamaha to more rapidly scale up its electric business. Once the electric scooters become successful, it could start upselling its electric motorcycles more broadly.

In the long-term, Yamaha could consider turning into more of an electric motor company, increasing the sales from its electric vehicles at the expense of its traditional motorcycles. It might seem controversial, but, if done the right way, wouldn’t Yamaha be able to create a competitive advantage, and even turn into the Tesla of motorcycles? I bet it could.

[1] “How much carbon dioxide is produced by burning gasoline and diesel fuel?”, FAQ, U.S. Energy Information Administration. Accessed at http://www.eia.gov/tools/faqs/faq.cfm?id=307&t=11

Southwest Airlines Buckles in for a Bumpy Ride