Xiaomi, a Chinese smartphone maker, had returned its position to 5th largest share in the worldwide smartphone market in 2017. [1] Xiaomi struggled, in 2016, in both domestic and international market and Xiaomi’s smartphone sales dropped almost by 18% YoY [2]; Xiaomi officially refused to disclose their sales result for 2016. [3] Many were surprised by this unprecedented rebound and called Xiaomi a “Chinese Phoenix”. [4]

Since insertion in 2010, Xiaomi is well-known for two things; low price products with comparable quality and devoted customers “Mi Fans”. [5]  Xiaomi developed Android-based user interface MIUI for the company’s smartphone products in 2010. Xiaomi set up an Internet forum to receive feedback from customers at the very beginning stage of development. Enthusiastic customers eagerly participated in the development phase by discovering and informing defects, bugs, and possible improvements for MIUI. Ever since Xiaomi has been releasing updated MIUI every Friday at 5 PM, harnessing customers’ ideas. This crowdsourcing of user interface development was crucial for Xiaomi’s success since the company had no brand or reputation. The key users not only helped developing but also had an important role in spreading Xiaomi’s vision and gathering more “Mi Fans”. As a result, in 2011, when Xiaomi first revealed its smartphone, MIUI user base was already 300,000. The active user of MIUI further expanded to 190 million by 2016.  [6] Experimental open innovation of Xiaomi has accomplished its goal to generate “loyalty and brand-“stickiness” among customers”. [4]

Xiaomi raised a $1.1 billion funding in 2014 and used it to fuel the company’s growth. Xiaomi vigorously invested in startups. Xiaomi made hundreds of partnership with startups and released all different kind of products under Xiaomi’s name including drones, air purifiers, power banks, scooters, electric fans, smartwatches, TVs and even electric rice cookers. Xiaomi didn’t have manufacturing facilities to produce those products.

Xiaomi, in turn, outsourced manufacturing but involved in the design process of its entire product lineup. Through this process, Xiaomi could deliver various products with the incomparably low price. Many were skeptical about this rapid expansion to non-smartphone industries. Even some claimed unnecessary partnership would ruin Xiaomi’s future given its very narrow margin and blamed the partnership to be a cause of sales dip in 2016. Nonetheless, Xiaomi continued its strategy and made a huge presence at retail business as opposed to its online-only strategy in the past. Now Xiaomi asserts that the company is not a smartphone maker but internet platform provider. Establishing an ecosystem through partnership and outsourcing is one of the important aspects of Xiaomi’s open innovation. In addition, Xiaomi clearly has built its ecosystem based on its Chinese “Mi Fans”.  A synergy between fan-based innovation and on/offline ecosystem made Xiaomi’s valuation $54 billion at the point of IPO; the company’s goal was $100 billion. [8]

Xiaomi’s open innovation of MIUI and expanding its product lineup facilitated its rapid growth and turnover in 2017, as well. However, Xiaomi’s lack of originality and plagiarism of IP on hardware are always criticized. Besides, the low quality of the company’s products is always an issue even though some argue that the price matches the quality. To overcome these issues and grow further, Xiaomi should be cautious in selecting partners. Building an ecosystem with partnership could give Xiaomi benefit of cost-effectiveness, but open innovation or outsourcing always entail control problem. Once the company fails to control the quality of the partner’s products, customers―even loyal customers― will turn their back.

Xiaomi should protect and not infringe any intellectual property (IP) to create a global presence. The company is facing multiple lawsuits in not only domestic but also international courts including the U.S. [9][10] Furthermore, Xiaomi should consider the way to incentivize MIUI users who participate development of UX. Sustainable Open Innovation requires a company to compensate the person who brought new idea so that the company would establish a competitive advantage.

Xiaomi’s stock price dropped sharply after IPO while the company aims to hit 100 million smartphone sales in 2018 and might become the world 4th largest smartphone maker. [11] There could be multiple reasons behind this drop; its razor-thin margin, the overall stagnation of the smartphone market, or even external pressure such as lawsuits and trade war. Nonetheless, Xiaomi will not stop its open innovation strategy. How long can open innovation be sustainable without making any profit? Was open innovation critical to the success of Xiaomi? or was it just because of cheap products? Can this type of open innovation be applicable to different companies and industries? 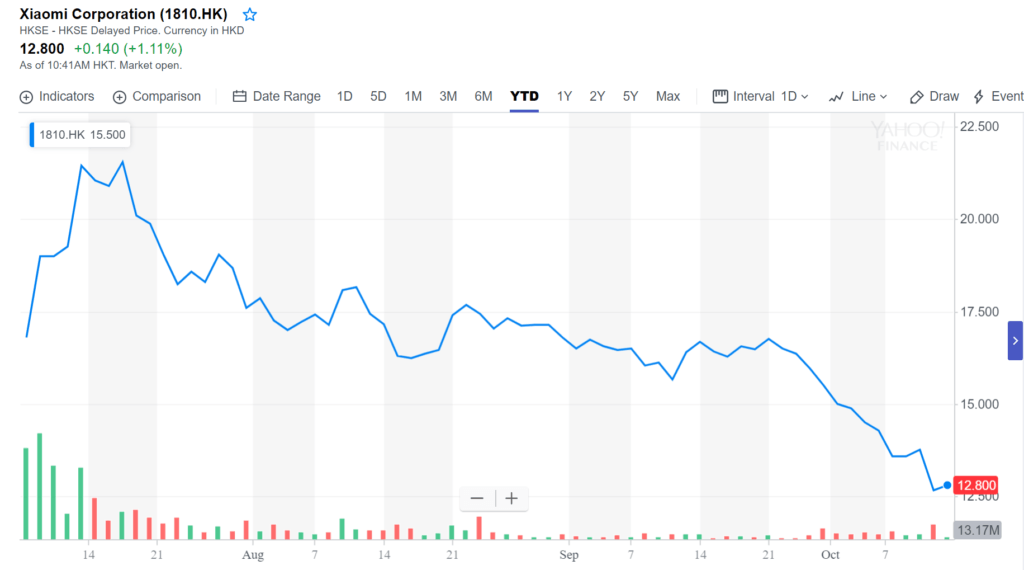 Put Your Money Where Your Mouth Is. Align’s Approach to Additive Manufacturing