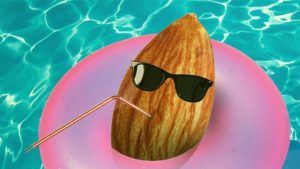 With over 13 million trees (5) used to produce almonds and pistachios, Paramount Farming Co, owner of Wonderful Pistachios & Almonds LLC, is the world’s largest grower of nuts (6). The company recognizes the significance of sustainable agriculture and is highly sensitive to its water consumption levels. The company has invested almost $25m in research and development in the continuous improvement of water-efficient irrigation practices (7). Additionally, the Almond Board of California invests +$2m annually in researching production and environmental issues related to Almonds (4). These efforts are paying off as the almond has learned to be leaner on its water consumption. “Since the early 1990s”, claims the Almond Board of California, “advanced production practices have helped almond growers improve their water efficiency by 33%, producing more crop per drop” (4). As seen in the chart below, efforts towards more efficient almond production continues to be realized: More almond production does not necessarily have to mean more water consumption. 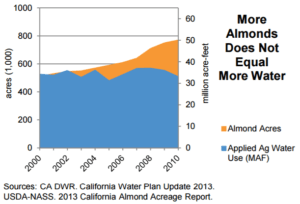 How is Water Efficiency Being Achieved?

Through progress in water distribution and advancements in monitoring technology, the almond industry has been able to enhance its distribution of resources required for almond production in order to more efficiently water and nourish almond trees. In fact, through these improvements, 83% of almond growers are now able to practice “demand-based irrigation”, whereby they have the ability to “track items like soil moisture, tree water status [and] weather conditions to determine when to irrigate their orchards rather than watering on a predetermined schedule” (4). This need based distribution monitoring helps to prevent wasteful use of resources. Additionally, 70% of almond orchards also now use micro-irrigation systems, which through drip technology and other direct irrigation advancements, helps to deliver water more efficiently to the root of the trees (4).  This helps to reduce wasted water in areas where it never reaches the trees and helps to prevent water runoff (4).

Global warming is impacting people and places all over the world in different ways. As California stretches deeper into its multiyear drought, many have been asking where its water is going. While almonds are a meaningful consumer of California’s water supply, it is often overlooked how the State’s Almond Board and individual enterprises like Paramount Farming are investing the time, effort and resources in proactively establishing advancements in the production methods of almonds. Instead of blaming the almond for gulping up California’s precious water, maybe we should be applauding the industry’s efforts to reduce its relative water consumption and should rather be asking what other agricultural producers can be doing to increase the water efficiency of their produce. (657 words)

Can Clif Bar sustain its reputation of sustainability in the face of climate change?