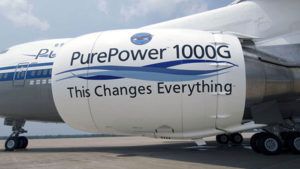 Pratt & Whitney (P&W) is a long-time manufacturer of jet engines located in East Hartford, CT.  While the exhaust of a jet engine is ultimately what moves airplanes through the sky, jet engine exhaust also contains a lot of CO2 and other emissions that can contribute to climate change.  Since we have all grown accustomed to the convenience of being able to get to anywhere else in the world in 24 hours or less, airplanes aren’t going away anytime soon.  So, what is P&W working on to balance the increasing scrutiny of greenhouse emissions with the rapid growth in demand for commercial air travel? 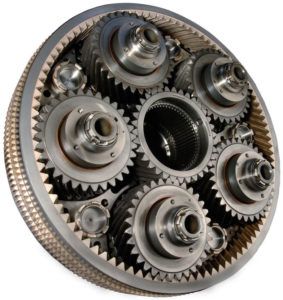 Well, at the moment they’re very proud of the recent launch of their newest family of engines, the PurePower PW1000G.  This revolutionary engine design uses a concept called the Geared Turbofan, which took P&W over 20 years and $10 billion to develop (1),(2).  In traditional jet engines, the large fan at the front of engine is directly driven by one of the turbines inside the engine, which forces both the fan and the turbine to spin at the same speed.  The downside here is that the turbine would like to be spinning faster, and the fan would like to be spinning slower, so neither one is operating at maximum efficiency.  P&W’s Geared Turbofan design uses a set of gears that allows the turbine to operate at its most efficient speed, while driving the fan it its most efficient speed.  The result is incredible – 16% less fuel is required to operate this engine, which means CO2 emissions are also reduced by the same amount.

While CO2 is the most prominent greenhouse gas emitted from jet engines, other unfriendly emissions include soot and nitrogen oxides (NOx) (3),(4).  Like CO2, soot is a direct contributor to climate change, whereas NOx gases indirectly contribute to climate change by leading to increases in ozone, which in turn traps more heat in the atmosphere.  NOx is formed as jet fuel combusts at very high temperatures within the combustor of the jet engine.  Both P&W and one of its competitors, General Electric (GE), are working with NASA to develop new jet engine combustors that will reduce NOx and soot emissions (5).  These combustors facilitate more complete combustion of jet fuel, reducing soot emissions, and reduce the production of NOx gases by lowering the temperature at which combustion occurs.  P&W has included the TALON X combustor, a combustor design that beats the Committee on Aviation Environmental Protection’s (CAEP’s) NOx emissions standards by 50%, in the PurePower PW1000G family of jet engines. P&W and GE continue to make incremental improvements to combustor design to achieve cleaner burning engines. 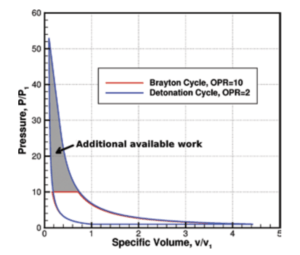 While the improvements P&W has achieved so far in aviation emissions reductions have been quite impressive, maintaining their ability to rapidly adapt to new emissions regulations that may come forth in the near term by staying connected to the cutting edge of scientific breakthroughs will be crucial to their success and endurance as a business.  One such scientific breakthrough that could be an absolute game-changer for the aviation industry is the Rotating Detonation Engine (RDE).  The RDE relies on a different combustion process that yields increases in engine efficiency of over 50% (6) (the outlined area in the figure to the left shows total energy output of a RDE versus a traditional jet engine).  This translates to savings on fuel consumption (and reduction in CO2 emissions) of a whopping 36%!  Currently, researchers at the Naval Research Laboratory and the Naval Postgraduate School (my alma mater!) are conducting research on RDE design, but neither P&W or GE are pursuing heavy research of RDE’s for commercial applications at this time.  While the concept of the RDE has been proven, no working engine has yet been produced.

Turning the unique concept of the Rotating Detonation Engine into a safe and successful commercial design would be a high-risk endeavor, likely requiring many years and billions of dollars, but the upside could be huge.  As a point of reference though, P&W spent over 20 years and $10 billion to achieve 16% fuel savings by developing the Geared Turbofan engine.  How much time and money should P&W be willing to spend on the 36% fuel savings the RDE could yield, and what would push them to take it on?  I would personally love to see a long-standing industry giant like P&W take a huge risk like this and be successful at it, and as a result deliver enormously impactful improvements to the aviation industry and to the future health of our planet.  Will it take extreme changes in the greenhouse gas regulatory landscape to get P&W to go “all in” on the development of the RDE?

TESLA – an ambassador of sustainable future.

3 thoughts on “Will Pratt & Whitney Continue to Propel the Aviation Industry to More Environmentally Friendly Altitudes?”