On December 12, 2015 the leaders of 195 nations reached a historic agreement at the COP21 in Paris to keep the increase in global temperature well below 2oC above pre-industrial levels and to aim to limit the increase to 1.5oC. The agreement was opened for signature on April 22nd, 2016 in New York and, as of today, has 192 signatories. Of which, 97 have deposited their instruments of ratification – meaning that it will enter into force…TODAY1.

But that raises the question of implementation: What should (or can) governments do to influence the behaviour of companies and individuals such that the objectives set in Paris will be honoured? One increasingly popular answer is setting a price on carbon.

The principle is simple: putting a price on carbon emissions captures (some) of the value that was previously lost in the form of a so-called “externality cost” and makes those responsible for it, pay for it. And it does so in the most economically efficient way, by allowing those market participants that can reduce emissions at a lower cost do the bulk of the work, while pricing out inefficient polluters.

Today some 40 countries and over 20 cities, states and provinces have bought into this idea and implemented carbon pricing schemes in some form or another (see Figure 1). 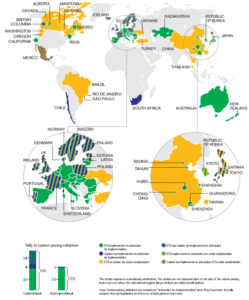 But how are those countries that have introduced carbon pricing schemes doing in terms of emissions reductions?

Launched in 2005, the European Union’s Emissions Trading System (EU ETS), is the first and biggest carbon pricing program in the world4. According to the European Commission’s website the EU is “well on track towards meeting its emissions reduction targets for 2020, set under the 2020 climate & energy package and the Kyoto Protocol”5 largely thanks to the EU ETS. However, the International Emissions Trading Association (IETA) argues that under its current structure, the EU ETS will not be able to deliver the volume of emissions reductions necessary to meet the targets set in Paris. And that is because the price of carbon is thought to be (and expected to continue to be) too low. IETA estimates that to achieve this level of emissions cuts, a tonne of CO2 will need to cost around €406. The closing price on November 3rd, 2016 was €6.47.

What if the EU recognised this incentive gap and decided to lower its emissions cap to push the price of CO2 up to that level? How strong a signal would that send to polluters?

To assess this question, one might look at how a price of €40 CO2t would impact the P&L of companies within a certain industry. In the EU, energy production remains the highest contributing sector to greenhouse gas emissions7, so if the overriding objective of setting a price on carbon is to reduce those emissions, analysing the impact on utilities seemed to me like the obvious choice.

What I thought would make this analysis even more interesting, is looking at how that impact varies depending on the extent to which a particular company has decided to hedge itself against this foreseeable price increase by investing in clean generation technologies. In that spirit, the next section focuses on analysing the hypothetical impact of an increase in the price of CO2 emissions on IBERDROLA: a Spanish utility with over €31.4bn in sales in 2015, 46.5 GW of installed capacity (of which 56% is derived from renewable sources and 7% from nuclear energy), and 31,000 employees that serve 34 million customers mainly in Spain, the UK, the US, Mexico and Brazil8.

The results are the following9:

In other words, in a Paris-compliant scenario where CO2 would be priced at €40 per tonne, IBERDROLA would be much worse off had it not invested heavily in clean10 sources of energy. That is because by virtue of having a cleaner generation base than the market average, the cost of CO2 per MWh would be lower for IBERDROLA than for the average market participant. How much worse (or better) off depends on how much of the additional cost is passed through to consumers. If the market % pass-through is low (for example, due to regulatory reasons), IBERDROLA would have to absorb the additional cost, which would have a negative impact on its earnings – albeit less negative than if it didn’t have renewables. If, on the other hand, market % pass-through is high, having invested in renewables will yield higher earnings for IBERDROLA, given that the market price will increase by more than the additional cost per MWh incurred by the Company.

In short: should carbon prices increase to a level that is consistent with the commitments made in Paris, traditional utilities that have not invested in clean sources of energy are likely to be priced out of the market. And by then, it may well be too late.

1 Thirty days after the date on which at least 55 Parties to the Convention accounting in total for at least an estimated 55 % of the total global greenhouse gas emissions have deposited their instruments of ratification, acceptance, approval or accession with the Depositary.

9 To isolate the effect of an increase in the price of carbon on IBERDROLA’s financials (in this case EBIT), the analysis focuses exclusively on the Spanish market. This market has three defining characteristics that make it especially well-suited for this exercise:

10 Although I have included nuclear energy as “clean” source of energy for the purpose of this analysis given its CO2 neutrality, I believe that this energy resource seldom fits that description.

Keep on trucking: An overlooked lever for sustainability

Student comments on Will COP21 put traditional utilities out of business?