Over the next 50 years, agricultural commodities are going to be heavily affected by global climate change.  With coffee’s growing region stretched around the Earth’s equator, global climate change is already starting to have an impact on the coffee industry.  As the world’s biggest seller of coffee, Starbucks is tracking global climate change very closely and putting in measures to protect its long-term business model. Research done by the International Center for Tropical Agriculture states that by 2050, 80% of the land used to grow the Arabica coffee bean, the main ingredient (read: raw material) of Starbucks coffee, will be unsuitable to crop. [1] The factors contributing to the downfall of suitable land for the Arabica coffee bean include infestation by pests, leaf rust, and land erosion due to rainfall.  In 2012, more than 85% of several large Guatemalan coffee farmers’ yield was wiped out by leaf rust. [2] Two years later, coffee farmers in Chiapas, Mexico lost 60% of their yield also due to leaf rust. [1] The lower yield for coffee bean farmers and scarcity in supply of the Arabica coffee bean will increase price and significantly eat into Starbucks’ margins.  Furthermore, if several of Starbucks key coffee bean suppliers go out of business, Starbucks will be forced to switch suppliers and establish new supply routes which could be very costly.  The drop in crop yields would also discourage new farmers to cultivate coffee in the future.  With the future of mass coffee production in serious doubt, Starbucks has taken actions to mitigate climate change.  However, there are a few very important measures which Starbucks should also consider.

The first serious climate change prevention measure which Starbuck took was to work with Arabica coffee bean farmers to improve their ability to grow coffee in warmer climates.  Following massive losses in coffee bean production from some of their South American suppliers, Starbucks distributed coffee plants that are more rust-resistant. In 2014, not only did Starbuck share its formula for breeding coffee plants with suppliers, but the company also donated 20 million seedlings to farmers. [1] To date, Starbucks has conducted 29 pilots (with 20 more in planned) with coffee-growing communities in regions with sensitive environments to improve coffee production as well as conserve and restore natural coffee plant habitats. [3] Helping the Arabica coffee bean farmers fight the effects of climate change now will be very beneficial to Starbucks in the future. 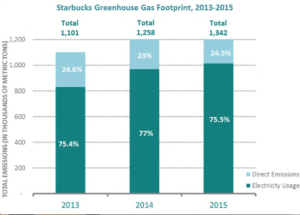 Starbucks’ number one priority should be to help their Arabica coffee bean farmers move their farms to higher ground to better cope with shifting climate change.  Higher ground means less rain, fewer pests, and less leaf rust.  However, coffee plants take roughly three years to yield a sellable bean, creating a long and costly transition.  Starbucks should start this transition sooner rather than later as there is no benefit to late adaptation.  Early adaptation to climate change through higher ground suppliers might result in fewer production wipeouts from suppliers such as the ones in Guatemala and Chiapas, Mexico.  Starbucks should also look to move their suppliers further away from the equator where climate change is most prevalent.  While tropical weather is a key component to coffee bean growing, moving a supplier as little as a hundred miles might make a huge different in crop yield.

Lastly, Starbucks should continue to do research into how to grow coffee beans in a way that make them less susceptible to pest infections and leaf rust.  The future of mass coffee production might become victim of global climate change, and it would be extremely advantageous for Starbuck to pay for the R&D now to save its long-term business model in the future.

Student comments on Will Climate Change Take Away Your Venti Mocha Frappuccino?