Over the past two decades, the National Basketball Association (NBA) has seen its popularity explode due in large part to the organization’s growing digital platform. Commissioner Adam Silver has clearly stated his goals for the growth of the NBA, aiming to “go after the NFL’s position as the most popular and profitable sports league”1. As a result, the league has invested in its domestic and international presence through social media, the NBA mobile app, NBATV, and by augmenting its NBA League Pass TV viewer package with streaming Broadband and Mobile offerings. The results speak for themselves as record TV ratings and views/downloads on NBA League Pass, NBA.com, and the NBA app led to the league signing a new television extension with ESPN and Turner that will pay $2.6 billion through the 2024-2025 season, a 180% increase over the current deal2,3.

With a new TV deal in hand, the league would benefit from addressing what many believe is currently its biggest problem, the growing rate of injuries, with another digital solution: wearable technology. Players are the NBA’s greatest assets and over the past five seasons, 217 games were lost to injury, “105 games more than the total in the previous five seasons (2007 – 2011)”4. 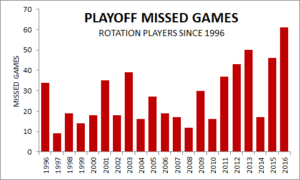 Much of this is due to the league’s grueling 82 game schedule that includes multiple sets of games being played on back to back nights, minimizing players’ ability to sleep and recover. The NBA has not entertained shortening the season since this would result in lower ticket and media revenues, necessitating everyone involved to take a pay cut. So how can they reverse this trend? Boston based company Whoop thinks it has the solution.

Whoop is a device worn on the wrist – similar to Fitbit – built to track heart rate, body temperature and body movement, during waking and sleeping hours, to calculate the strain placed on the body and the body’s subsequent recovery5. The product’s five sensors take “lab-quality readings 100 times per second, collecting an incredible 150-megabytes of data on an athlete per day” 6. The company sells the device and accompanying software directly to athletes and teams in order to provide the athlete with information to help them reach their potential. 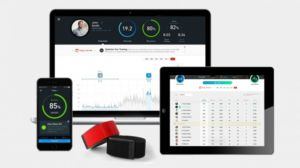 In addition to the breadth and speed of the data, Whoop differentiates itself by delivering “actionable and behavioral recommendations tailored to the user, depending on the information it receives”5. From Sept 2015 through Jan 2016, Whoop tracked the behavior of 119 NCAA Division I athletes (including basketball). Over the four months, these players increased their average sleep per night by 42 minutes while simultaneously improving their “sleep hygiene” (lower levels of late night caffeine and alcohol)5. Resting heart rate and heart rate variability, “key biomarkers to determine player readiness and recovery,” improved as well5. The result: during this period, the athletes experienced 60% fewer injuries. Similar studies have shown that following the recommendations and improving Whoop’s “Recovery Score” (based on heart rate and variability as well as sleep quality and duration) leads to a significant increase in field goal shooting accuracy7: 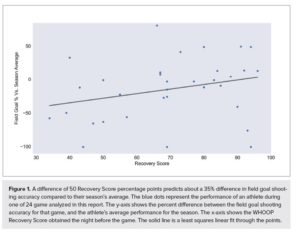 As the CEO of Whoop commented, “the best ability is availability. If you have a star player who is injured, fatigued or on the bench, that person isn’t really valuable. This new age of continuously understanding the body will lower injury rates and [drastically] change athletes’ careers”6. The company has received endorsements from star athletes LeBron James and Michael Phelps, offering legitimacy and visibility to Whoop’s value proposition.

Yet NBA rules do not allow these athletes to wear this technology in games, when the data collected is likely the most meaningful. This is due to several reasons, including:

2)      Marketing rights – which wearable technology would be deemed acceptable to use by the league?

3)      Ownership of data – does the player own their data? If this data can predict an injury, will the front office have access, which could lower the player’s potential contract value?

This technology will be discussed during the 2017 collective bargaining agreement, as the NBA union met with Whoop last April to discuss allowing the technology during games8. These two parties should work together on a partnership in order to promote a better NBA product for the fans, and the NBA can make Whoop an official sponsor of the league. Additionally, the players should have ownership over the data to preserve their negotiating power in contract discussions, sharing with coaches and the team on a voluntary basis. The safety issue remains an interesting topic, and perhaps Whoop can work with the NBA to develop a lighter weight material that could cause less harm.

By embracing wearable technology, the NBA can improve its product and continue to set the standard for digital innovation in sports.

ISA did IoT before it was cool!

Student comments on Whoop There It Is – Is Wearable Technology the Next Frontier in the NBA?