Protectionism swept across continents, from the election of Donald Trump in US to Brexit in UK. Potential policy changes, such as increasing cross border tariff, restriction of imported goods and immigration, will have big impact on today’s global supply chain. And China’s isolation on strict control of information technology has already been affecting many companies, especially in the technology industry.

Apple, long named one of the best supply chain companies in the world, benefits significantly from an integrated global supply chain. An iPhone is a product of the world – designed in US with components from Japan, Taiwan, china and Korea, finally assembled by Foxconn’s factory based in China. Any changes affecting cross border trading could create a ripple effect along the supply chain.

Best place to manufacture the next iPhone

Apple is famous for its lean supply chain management. An iPhone is produced and shipped directly from the assembly line in China to a customer anywhere in the world. With only one warehouse in California to supply all retail stores in the world, Apple achieves an inventory turnaround of 3.2 days. [1] A potential high import tariff suggested by Donald Trump or restriction of foreign produced goods means that this model would no longer work. To avoid the risk, manufacturing in US could be an option. However, four times higher labor cost and lack of supplier ecosystem in US does not make it feasible any time soon. Otherwise, Apple has to increase iPhone price by at least $60. [3] Brazil is such a case. High import tariffs forced Apple, Foxconn to manufacture iPhones in São Paulo. The phones retail for 50% higher than the Chinese made iPhone in US as indicated in the figure below. In the face of higher wage costs, and lower productivity, Foxconn has invested heavily in automation. [4] In December 2016, Foxconn announced a plan of a non-human operating factory. [5] Apple also announced, in May 2017, an advanced manufacturing fund of $1 billion including research of automation. [6] In other words, even if Apple brings its manufacturing back to the United States, the phone you have in your hands won’t be Made in America, it’ll be Assembled in America. 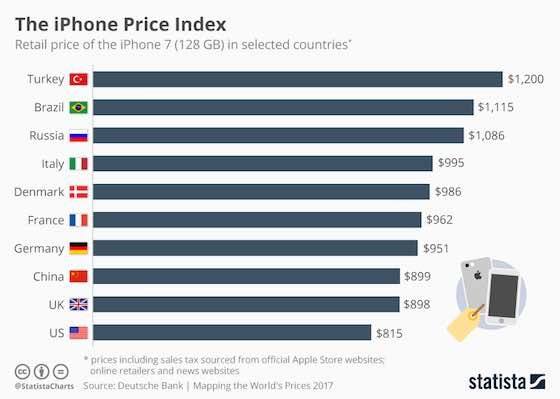 Considering the high labor cost in developed countries, does that mean iPhone is still going to be “Assembled in China”? In 2016, China’s information protective government suspended iTune and iBook. Google powered Android phones have long been banned in the country. Encryption is potentially a big issue for Apple in the future. Additionally, rising labor cost makes China no longer the most attractive manufacturing center in the world.

As a result, finding an alternative manufacturing location is going to be critical for Apple in the long run. In May 2017, Apple announced its plan of opening an assembly plant in India. [7] This is a well weighted decision to avoid potential instability from rising protectionism.

A bigger concern for Apple would be how to keep its lean supply chain model efficient, arguably the secret source of Apple’s profitability. Since Tim Cook became COO in 1998, he outsourced manufacturing, cut down in-house warehouse to 1, and reduced number of suppliers to 154. [8] To sustain the model, quality of suppliers is critical. Apple sole-sources certain components as technological advantage, operating scale and efficiency outweigh supplier concentration risk. For example, iPhone 7 application processor is sole-sourced from Semiconductor Manufacturing (TSMC) due to the battery performance. TSMC’s successful throughput execution becomes essential to prevent disruption to, production scheduling, periodic new product introductions, and Apple’s inventory management.

Now, if Apple has to manage four manufacturing centers – China, India, Brazil and US – which would likely require different local supply chain networks with additional suppliers, it would significantly increase Apple’s supply chain complexity. Difficulty of controlling suppliers’ quality, and not being able to leverage central planning would increase the risk of reducing supply chain efficiency.

Protectionism is used as a mean to “bring manufacturing industry back”. A big question is whether you can truly achieve the objective by isolation. To bring back manufacturing, a rather self-sustained supply chain ecosystem needs to be established domestically. My concerns are whether the required level of skilled labors can be available in time, and whether there would be enough resources from the government to compensate the inefficiency during the transition. For example, Japanese auto producer, Nissan, has threatened the British government to help develop the local supply chain. If politicians are serious about rebuilding local industry, then tax breaks, subsidiaries and other policy incentives at the scale of hundreds of million dollars need to be in place.

Banking across borders: Goldman Sachs in London – or Frankfurt?

Caterpillar: Building the Supply Chain of the Future

Student comments on Who is making your next iPhone?