54% of people polled across 40 nations said that it was a very serious problem. [1]

Yet, as a global society, we have thus far been unable to sufficiently curb behavior that creates negative environmental externalities, especially when that behavior continues to boast positive benefits for some. Why is there not more united action?… Why is there not an RC class devoted entirely to this problem?

Psychologists have studied our collective sustainability inaction in the context of the well-known “bystander effect.” As psychologist Robert Gifford says, “psychological barriers impede behavior choices that would facilitate mitigation, adaptation, and environmental sustainability.”[2] In other words, even if we know about climate change, there are psychological hurdles we must collectively cross before we will ever take effective action. Psychologists also argue that associating direct positive benefits from environmentally responsible behavior is more likely to motivate action.[3]

So maybe, parallel to our glacially slow efforts to adjust, we can find ways to impede our impact in the interim through actions that see direct positive returns.

Tim Flannery, author of “The Atmosphere of Hope,” argues for this type of action in what he calls a Third-Way for impeding climate change (beyond changing energy consumption and exploring Geo-engineering). Flannery says that “Third-Way technologies recreate, enhance, or restore the processes that created the balance of greenhouse gases which existed prior to human interference.”[4] Third-Way technologies involve things like the carbon-neutral cement, chemically driven carbon-capture storage, and manipulation of geological processes. [4]

One of those “Third-Way” companies is ADA Carbon Solutions, who saw climate change regulation as an opportunity and built a business plan explicitly for reducing the emissions (with a focus on mercury) that coal-fired power plants produce.

Mercury is extremely harmful to humans and to the environment, yet as of 2015 mercury emissions were significant at 40% of U.S.’ coal-fired power plants.[5] Mercury occurs naturally in rocks, including coal. Dangerous mercury compounds (methylmercury) form when mercury is released from rock into the atmosphere and into water. While some of this happens naturally, a large percentage of emissions are manmade (mainly through coal burning).[6] In addition to the airborne danger it poses for the human central nervous system, mercury pervasively accumulates in organisms and poisons food chains. Mercury also affects micro-biological activity, impacting the usability of soil.[7] 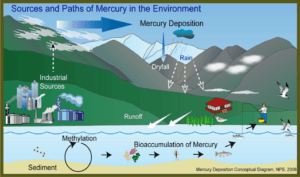 Finding a “Third-Way” to remove mercury emissions has been challenging for a couple key reasons:

1. The technology to do so is highly complex.
2. Many of the solutions require high energy usage and generate high carbon emissions.

ADA Carbon Solutions develops products that oxidize mercury (and other pollutants) and then use an activated carbon “catalyst” to capture and remove it. ADA’s products/services help coal-fired utilities remove mercury while using 30-60% less carbon than comparable solutions in the market.

Why is a low-carbon emitting solution to mercury removal like this important in the interim?

In 2015, the Supreme Court overturned a mercury pollution regulation set by the EPA on the grounds that the EPA did not consider “cost” in its analysis of whether or not to regulate power plant pollution. EPA analysts estimated that the regulations would have resulted in 130,000 fewer asthma attacks, 4,700 fewer heart attacks, and 11,000 fewer premature deaths each year (in addition reducing mercury in wildlife and the atmosphere).[5] Coal power plants aren’t going anywhere soon, and apparently neither are the dangerous emissions they produce. ADA’s solutions provide a “Third Way” to avoid dangerous emissions of Mercury and limit residual carbon emissions until they do.

The best thing for the climate would be massive adaptations to the way we source and use energy. For the time being, I place my hope in endeavors that reap benefits through the mitigation of externalities. If we cannot shift the psychology enough to garner the commitment necessary to stop climate change, then we must lucratively incentivize our best minds to create technologies that limit our destructive path. Targeted “Third-Ways” like ADA Carbon Solutions provide us with a better chance of reducing emissions and limiting climate damage while we figure the whole psychology part out.

Student comments on While We Wait on Human Psychology, Let’s Find Another Way