Automotive manufacturers have been heavily investing in fuel efficient technologies to meet tightening emissions regulations.  However, this increased investment has occurred in tandem with lower consumer demand for these vehicles, as the price tags remain high relative to the low fuel prices currently available in the U.S.  While automotive manufacturers have lobbied for less stringent requirements in light of the decreased demand for these technologies, manufacturers shouldn’t expect emissions regulations to ease anytime soon.

The Corporate Average Fuel Economy (CAFE) standards are U.S. federal fuel emissions regulations over automotive manufacturers of passenger cars and light trucks.  The objective of the CAFE standards is to cut carbon emissions, with current rules requiring automakers to achieve an average of 54.5 miles per gallon across their fleet by the year 2025.[1]  Recent analysis issued in July 2016 by the federal agencies charged with overseeing these standards highlighted that automakers are reducing emissions and investing in cost-effective technologies at higher rates than anticipated only a few years ago.[2]  The analysis concluded that the current standards in place through 2025 could be met largely through increasing the efficiency of gasoline-powered cars, while a modest penetration of hybrids and electric vehicles would be required.  While much progress has been made in developing these innovative technologies, significant further investment from automotive manufacturers is necessary in order to successfully meet the standards as they become increasingly stringent moving forward. 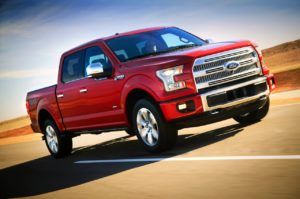 As one of the “Big 3” automotive companies, Ford Motor Company has dedicated itself to investing heavily in its internal capabilities to meet tightening emissions regulations.  One of the company’s first major forays into this endeavor began when it announced it was undertaking a significant design change to its F-150 pickup truck, switching the truck’s body from steel to aluminum in order to reduce weight and improve fuel efficiency. This changeover necessitated substantial capital investment from Ford, taking several years and costing more than $1 billion.[3]

This investment in the future of its best-selling vehicle carried with it tremendous financial risks. The F-150 provided Ford with approximately 1/3 of the company’s North American sales and half of the company’s profit from that region; any issues related to its rollout would substantially affect Ford’s financial metrics.[3]  Vehicle performance was also at stake.  Many of the F-150’s loyal customers valued its strength and towing capabilities – it would be catastrophic if the new aluminum body was credited with substandard performance.  However, the risk was necessary in order to move the company forward in achieving its goals of meeting the climbing fuel efficiency standards and having long-term sustainability across its product lines.

While the investment in electric technologies aligned with its desire to improve fuel efficiency, I believe it could be a substantially riskier bet than the aforementioned efficiency improvements made to the F-150.  This is because as of 2015, plug-in hybrid, hybrid, and battery-electric vehicles represented only 2.9% of automotive sales in the U.S.[5]  This trend is likely to remain stable in the near-term as fuel prices remain low and customers find it difficult to justify a higher price tag for lower incremental fuel savings. Therefore, it remains to be seen whether the customers will adopt these technologies, and whether Ford will achieve a justifiable return on its investment. 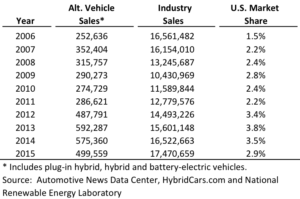 Coupling the high potential risks associated with substantial capital outlays and the low perceived future demand of electrified vehicles, I believe Ford should prioritize investment in making traditional gasoline- and diesel-powered vehicles more efficient.  This investment would allow the company to largely meet the required CAFE fuel efficiency standards, as these vehicles are expected to represent the majority of vehicle purchases for the near future.  In order to achieve this, the company should continue to develop new engine and transmission technologies, advanced powertrains, and lighter vehicles to provide significant fuel-economy benefits and best meet federal regulatory standards going forward.

Taken together, Ford’s investments in fuel efficient technologies could provide the company with a tremendous opportunity if it is able to realize a significant competitive advantage over its rivals.  Being a first-mover in fuel efficient R&D will provide the company with patent protection over these technologies, which could be a major advantage as other companies seek to develop their own alternative technologies to meet regulatory requirements in the future.

INDITEX: FROM “LOOK GOOD” TO “DO GOOD”