UPS first entered the International market in the mid-70s with operations in Canada and Germany. In 1988, UPS launched its own airline to facilitate the transportation of goods across international borders. By 1992, UPS was delivering to over 200 countries and territories and its services touched 4 billion of the 6 billion global population [1].

In response to customer supply chains going global and the rise of manufacturing in low cost countries, UPS built the capability to move international heavy freight through major acquisitions – Challenge Air Cargo in 2000 [2], Fritz companies in 2001 [3] and Menlo Worldwide Forwarding in 2004 [4]. UPS now serves over 220 countries and carries 2% of International GDP and 6% of US GDP in its network [1]. 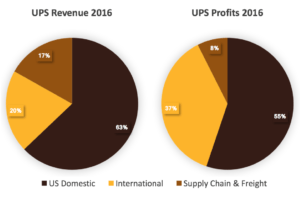 In 2016, 20% of UPS Revenue and 37% of UPS Profits came from International Operations clearly underlining the importance of international commerce to UPS [5].

The recent US election, where President Trump won on a platform of Nationalism and restricting international trade, the UK Brexit vote, and the rise of political parties espousing nationalism and isolationism in major EU countries, presents a clear threat to this successful strategy.

Fortunately, the UPS Strategy group has employed a very effective “Scenario Planning” process since the late 1990s. In its first scenario planning session in 1997, UPS managers explored the “Regressive World” scenario, one of four scenarios, focused on strong regional and national regulations. In a follow-on scenario planning exercise UPS management considered a “Bordered Disorder” world characterized by a highly regulated protectionist environment, an increase in security threats, and environmental and financial shocks [10,11]. Although both scenarios were discarded in favor of globalization, the potential action steps, if those scenarios were to prevail, should form the basis for future action.

What UPS is doing in response

What else should UPS do?

Lobbying efforts: UPS should focus its considerable resources and PAC to support free trade and globalization in the US Congress and in International countries.

There are a number of additional questions that need to be addressed.

[8] Ajot.com. (2008). UPS today announced it has agreed to acquire its authorized service contractor in Romania. [online] Available at: https://www.ajot.com/news/ups-today-announced-it-has-agreed-to-acquire-its-authorized-service-contrac.

Sustainability in Food: How General Mills is Combating Climate Change