What could profoundly cause America’s largest retailer, Walmart, to lose its top ranking among other retail giants in the not-too-distant future?[i] Possibly, its traditional supply chain model. Walmart has historically utilized supply chain management to help it achieve long-term growth and maintain a competitive advantage against its competitors. To date, the retailer has negotiated various costs with suppliers, established an efficient private trucking fleet, and uses a central database to minimize inventory levels.[ii] However, Walmart has experienced an inventory growth rate exceeding its sales growth rate from 2010 to 2017, indicating that supply chain improvements through digitalization are needed to retain market dominance over its competitors who have embraced new technologies.[iii]

In the short term, to address its digitalization deficiency, Walmart has partnered with Google Express, the preeminent online e-commerce competitor to Amazon, to acquire Google’s data analytics platform and skills in artificial intelligence.[vi] In the U.S., over 40% of individuals use their virtual personal assistant at least once a day and 20% of searches on mobile devices are queries on Google Voice. [vii][viii] Ordering through Google Express will not only provide industry dominance as Walmart items will be presented first in search results, but also information about Walmart’s customer preferences will be collected and analyzed easily.[ix] Ultimately, Walmart customers will sync their Walmart accounts with their Google accounts which will use predictive analytics to better forecast customer demand based on past shopping behavior.[x] This immense data intake will also require a more responsive and agile supply chain. 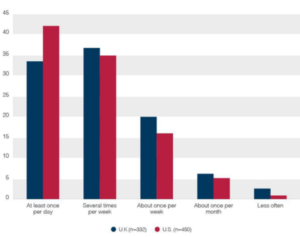 Another creative digital solution is Walmart’s consideration and testing of “associate delivery” where employees can opt to deliver packages for extra pay on their way home from work in their personal cars. Walmart uses GPS technology and proprietary algorithms to assign employees, based on their preferences and where they live, to customer orders in the smallest possible distance from their typical work commute.[xi] Walmart is also starting to transform parts of its store to become fulfillment centers for e-commerce.[xii] If customers pick up items purchased online, they may receive a discount and Walmart will experience lower shipping costs.

In the medium term, Walmart is making investments in innovation within the company. It March 2017, Walmart acquired Jet.com, an e-commerce retailer, and formed Store No. 8, an innovation incubator to refresh its online retail business.[xiii] Gains in artificial intelligence, machine learning, and autonomous vehicles could result from innovations in Walmart’s venture arm to better position Walmart to take advantage of supply chain advancements already used by Amazon and other more technologically-advanced online selling platforms.[xiv]

Walmart should consider adopting more ingenious digitalization solutions to improve its supply chain and maintain its dominance in retail over Amazon and other competitors. The retailer may consider leveraging data analytics to behave more responsively to the weather.  Historically, Walmart analyzed data on sales during hurricanes and shipped in advance those supplies to its stores while pre-positioning trailers with food and water to quickly adapt.[xv] The challenge and impact of global warming on our world may create more frequent and more quickly occurring storms so Walmart should incorporate predictive modeling to better react to severe disturbances. Monitoring and forecasting weather patterns could allow Walmart to profit from these shocks more rapidly and with reduced costs.

Walmart should also consider adopting supply chain improvements through digitalization in its clothing space. Retailer Zara creates clothes out of a limited number of fabrics and patterns and in-house designers to shorten lead times and uses social media feeds to sense demand and direct information quickly to its supply team.[xvi] Walmart could utilize aspects of the Zara supply chain in a portion of its clothing operation to make it more competitive in the modern retail landscape.

Some important questions still loom for Walmart as it embarks on significant change to adapt to today’s digital technology. Will Walmart actually achieve the best entrepreneurial ideas with its innovation arm internally or is external growth more likely to produce results? Is it wise for Walmart to use store associates to perform delivery when it will soon be robots, coupled with drones and/or driverless cars, replacing those jobs instead? Is it already too late for Walmart win against Amazon in the future of retail?

Walmart and Block Chain: It Takes Two to Mango

Pie in the Sky: can Africa help UPS in the Game of Drones?

Student comments on What Walmart Wants for Christmas: A Digital Supply Chain Makeover