Netflix has already revolutionized the way entertainment is delivered to consumers but their next goal is even more ambitious.  The company is using big data to guide what content to produce and the user experience.

Historically, content producers like Viacom and Disney chose the shows and movies they would produce based on very little data and would rely on the intuition of executives who were expected to have a pulse on what viewers wanted to watch and what ideas/scripts were good.  Whether they wanted to or not, traditional television broadcasters approached content in this way because they had barely any viewership data outside of estimates produced by Nielsen which were not very accurate or informative [1].  The game changer is that Netflix’s digital distribution network and infrastructure allows it to track every click and every facet of viewership.  Netflix has decided that the art and intuition in the traditional model is less effective than the insights provided by this massive set of data.  Their ability to select popular shows to produce is becoming more important as their industry matures because the price to acquire content made by third parties is rising at an unsustainable rate; Netflix can no longer rely on buying proven shows but has to focus on producing their own original content.  In a few short years, Netflix’s original content production budget has grown to the biggest in the industry,$5B, making selection vital to the business [2]. 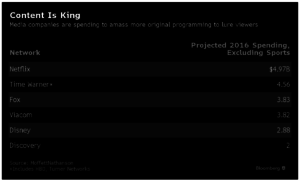 This strategy has already shown some real success.  Netflix noticed that there was a high level of interest in the show Arrested Development which had been cancelled a few years prior and was originally carried by Fox but was carried by Netflix.  The data said that viewers loved the old episodes and in turn Netflix greenlit a third season of the show as original content for which there was a lot of fanfare.  Their biggest success and bet to date though has been House of Cards.  The show was put out to bid and Netflix had to pay $100M to secure the rights to the show over other top TV networks like AMC and HBO.  This was a big bet to take but Netflix knew from their data how much of a draw this would be because they knew that on Netflix, House of Cards director’s movies were big hits, Kevin Spacey was very popular and the British version which streamed on the platform was also a success [1].  Netflix was able to leverage their data to have a leg up on the competition, like playing a game of poker where everyone else had their cards showing [4].  Finally, as the business goes global they also need to pick content that can be successful across borders.  An example here is that the data showed that Adam Sandler was an actor who had global appeal so they signed him to a 4 picture deal; his first movie became the most watched movie in Netflix history [2].  Ultimately Netflix’s goal is to have enough content that customers want to watch on its platform to attract new customers and keep current ones.  By using data they have figured out a way to more efficiently hit those goals.  What has historically been the art of the tastemakers in Hollywood is moving to the science of those in Silicon Valley.

Not only is data being used to select the content Netflix produces but it is also used to select what content it should serve up to each individual consumer.  They have created algorithms that can help predict what shows or movies a viewer would want to watch based on their tastes, day of the week, time of the day and other factors.  The moment you finish watching something another algorithm can suggest something else to watch immediately when the credits roll based on the prior decision [1]. Aside from catering to your viewing tastes, Netflix even uses data to select the best header images of each show.  For example, when Daredevil was released there were 8 different header images used and based on the click through rate, they selected the most popular one and eliminated the other seven [2].  Similarly, when House of Cards was first released, Netflix produced 10 different trailers and were able to track which one was most effective by tracking who viewed which one and the percent that then went on to watch the show [1].

Netflix’s use of big data, which was made possible by their digital distribution platform, has fundamentally changed the media landscape and helped propel Netflix to great success.  They know what customers want, when they want it and how they want it.  It has allowed them to disrupt the legacy TV business and create a different business model that positions them for success into the future.

From Digitilization to a New Energy Landscape

Student comments on What makes good TV? Apparently the answer is more science than art…