“It is with great pleasure that I welcome you to the Mar-a-Lago Club, one of the most highly regarded private clubs in the world,” proclaims Donald Trump on the website for his opulent beachfront property in Palm Beach, Florida.  Unfortunately for Mr. Trump, Mar-a-Lago is only about six feet above sea level, and will likely become mostly submerged underwater within several decades.  How does Trump—an outspoken skeptic of climate change—plan to succeed in an industry where the effects of climate change are so damaging?

Research indicates that Global Mean Sea Level (GMSL) could rise by six feet or more by the end of the century due to Antarctic melting caused by Greenhouse gas emissions [1].  Absent preventative action, hotels and other attractions close to these elevations will experience significant flooding, incurring large infrastructure costs and driving down consumer demand, or even become submerged entirely, effectively rendering the property valueless.  Experts believe that Mar-a-Lago may be flooded 210 days per year within the next 30 years, and the outlook is not much better for many of The Trump Organization’s other properties. 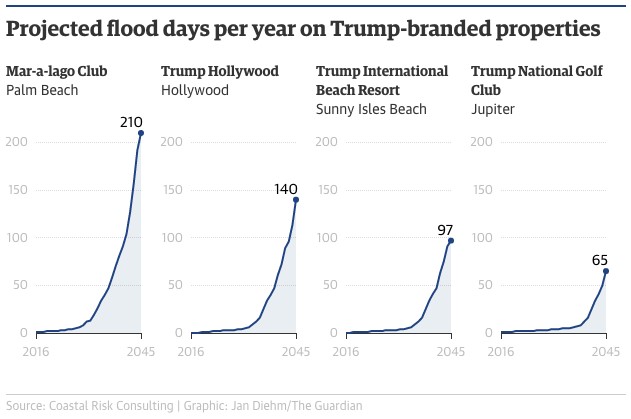 Climate issues affecting The Trump Organization and the broader hospitality industry extend beyond increases in sea level, however.  For instance, several consequences of climate change impact consumer demand for tourism.  As regulations become tighter on oil & gas production, fuel prices may increase, causing a decrease in demand for travel as air and land transportation become more expensive.  Demand for tourism in developing countries may be further hampered by climate-induced food and water shortages that lead to political and social instability.  In addition to overall demand reduction, tourism demand is likely to shift as global warming causes some regions to become too hot while others become more comfortable.

Commodity price increases and volatility have implications on the cost side of hospitality P&Ls as well.  The US hotel industry consumes roughly 150 billion liters of water and 240 million kWh of electricity per year [3][4].  As key cost drivers, any increases or volatility in these commodity prices will pressure the margins of hospitality businesses.

What Is Donald Trump Doing About It?

In the case of Trump’s south Florida properties, his best hope may be the local government.  The nearby city of Miami, for example, is spending $500 million to build seawalls, raise roads, and install pumps to drain water from the streets [5].  While temporary measures, the city hopes these efforts will buy time to develop more radical technological breakthroughs.

Across the Atlantic, however, Trump has taken a more hands-on approach to counteract the effects climate change on his business.  Trump applied for a permit to build a seawall himself on the golf course at the Trump International Hotel in Ireland to prevent erosion caused by higher sea levels and more turbulent tides.  Despite publically referring to global warming as a “hoax,” the permit application specifically mentions the seawall’s purpose as combatting “global warming and its effects” [6].

What Else Should He Do?

To further combat the effects of climate change, hospitality businesses such as The Trump Organization can pursue several options:

While not reflective of all climate-related challenges plaguing the hospitality industry, The Trump Organization is a notable microcosm that particularly illustrates the criticality of acknowledgement.  Trump needs to accept that his business is facing a real problem before he can lead it down the path to recovery.

Student comments on We’re Going to Build a (Sea)Wall: Cognitive Dissonance in The Trump Organization