Chinese students coming to the United States experience a certain culture shock on their mobile phone screens. Whatsapp, Groupme, Paypal, Venmo, Skype, Facebook, Facebook Messenger…The sheer number of apps – often with overlapping functionalities – which one needs in order to properly socialize here can be extremely confusing, especially when all of this, and much more, is done within one app only in China: Wechat.

With a staggering user base of around 850 million monthly active users (+30% yoy), Wechat has helped its owner Tencent become an internet powerhouse that’s worth close to $250 billion US dollars in market capitalization. The app permeates all aspects of Chinese life in the digital age, and is a key “gateway app” on any Chinese mobile screen. This means that beyond its own native functionalities, it also acts as a traffic gateway/source for all other apps trying to tap into its vast user base.

Wechat as a Messenger

Wechat started out as a mobile chat app. Today, for social messenging, Wechat has almost entirely replaced traditional texts. Not only is it used for point to point messages between individuals, but group chats are easily formed within Wechat, eliminating the acrobatics of juggling between Facebook Messenger, Whatsapp, Groupme, Snapchat and Skype that one often needs to perform in the US.

As an example of how easily group functions are built in to the app, a speaker at a consumer conference I attended this summer once shouted out a code of “1345” to an audience of several hundreds of people, everyone typed in the code on his or her wechat, and within seconds everyone was in the same wechat group. No email links, no phone numbers – everything instantaneous.

Wechat as a Social Network 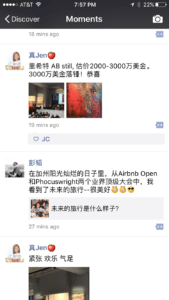 As Wechat evolved, it soon evolved beyond a simple messenging to a broader social network app. “Wechat moments”, similar to a Facebook Feed, has essentially replicated the Facebook experience on mobile and is a simple “tab” away from the messenger function within Wechat. Unable to compete with Wechat’s massive scale, most Facebook-equivalent companies in China are now close to bankruptcy.

Wechat has also incorporated more public elements into its social network. In addition to seeing your friends’ Wechat moments, one can also create and follow public accounts, ranging from KOL’s opinion pieces to newspaper articles to the latest and greatest activities available in your local town.

Wechat as a Payment System 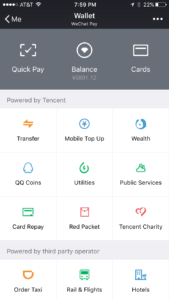 Wechat pay – similar to Venmo/Paypal – also allows people to easily transfer money to each other. While this can happen between friends through the traditional messenging interface, through a simple swipe of a QR code money can be transferred to any street merchant without connecting as friends on wechat. In first tier cities like Beijing, Wechat payment is widely accepted, so that on most days consumers can now use Wechat payment almost as a complete substitute for cash. One can even pay for mobile top ups, utilities and a range other services quickly and easily within Wechat Pay.

Wechat as a gateway app

With its vast captive and sticky user base, Wechat has also begun to direct traffic to other key apps users commonly require, in some cases allowing users to access those apps without actually having to download a separate app. For instance, as a substantial equity owner of Didi, China’s equivalent of Uber, as well as Jingdong, China’s equivalent of Amazon, Tencent leverages these resources to allow its users to order Taxis and purchase goods without having to leave the Wechat interface for a separate app.

Going forward – Where are the limits?

While Tencent has been continuously enabling its app with more functionalities, at some point it has to weigh the costs of convenience against the danger that Wechat becomes overly crowded and packed. In my mind, the messenging and social network functions remain key here – focusing on these two aspects and protecting them from getting “squeezed” by other less important functionalities is critical to maintaining healthy usage and traffic to the app. Advertising on “Wechat Moments” will likely remain the key source of revenue for the app, so ensuring value proposition remains strong in this segment of the app is of particular importance. The other functions can then be added on, and given relatively little screen space as “optional” functionalities. In other words, the main presentation should be a one-pager – the rest can go into a useful catalogue of appendices.

The Doctor is In: Remote Surgery in the Digital Age

Student comments on Wechat – Cleaning up your mobile screen