72% of Americans now own a smartphone [1]. As smartphones have become increasingly prevalent, they have revolutionized how businesses market to consumers. While the implications for e-commerce have been clear, smartphones also stand to change brick-and-mortar retailing, in part through increasingly granular in-store tracking.

Enter Euclid Analytics. Euclid’s core software product is installed on a retailer’s WiFi network [2] and tracks smartphone Wi-Fi signals in-store to provide retailers an unprecedented level of granularity in measuring customer behavior in brick and mortar stores, including shopper volumes, the percentage of passersby who enter, and browsing patterns and stay duration, regardless of whether the customer connected to instore WiFi or not. Euclid identifies a smartphone by its Media Access Control address, which until the advent of iOS 8 was static for a given device [3], allowing Euclid to uniquely identify shoppers between visits and across stores. Euclid then synthesizes this data into dashboards, allowing retailers to visualize store flows, track shopper volumes and measure the effectiveness of different store layouts, as well as integrating with common CRM, Marketing and POS systems. See below for dashboard samples 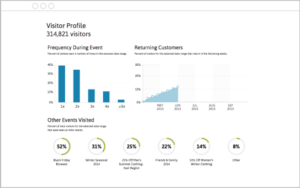 Most recently, Euclid introduced Euclid Connect in July 2016, a white-labeled technology solution whereby retailers can allow customers to opt-in to store WiFi with a single login [4][5]. This allows retailers to link online behavior to in-store activity, closing the online-offline gap and creating an omnichannel tracking system where retailers can attribute in-store behavior to existing online campaigns. 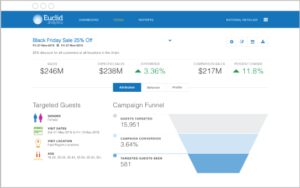 Euclid was founded in 2010 and has grown since then, raising $44M in venture capital including a $20M series C in January 2016. The company claims that is used by 500 clients in over 65 countries and captures 7 billion data points a day [6]. This growth has likely been aided by platform’s ease of installation. Since Euclid relies on Wi-Fi and integrates with existing networking providers, the company claims that its system can be deployed in 48 hours [7]

The arrival of this kind of technology also raises deep-seated concerns that apply to the broader digital movement, namely the expectation of privacy and the control that users have over their data.

Euclid is not the first company to introduce this kind of in-store tracking service, but the nature of its technology means that it operates without requiring users to consent to being tracked, unlike competitors such as Apple’s iBeacon. While Euclid admittedly anonymizes their data, and allows users to have their information deleted from Euclid’s systems [8], this may not be good enough. According to a 2015 Pew Survey, 88% of Americans considered it important that someone not be able to track them without their permission [9], and a recent survey by OpinionLab found that 77% of customers find in-store tracking unacceptable [10]

The signs of potential privacy-focused backlash among retailers are already apparent, with Philz Coffee terminating its contract with Euclid due to customer complaints about privacy [11]. While customers have certainly looked past the privacy concerns that accompany the digital era before, Euclid’s ability to overcome these issues on its path to sustainability is an open question.

The path forward – creating a robust solution without compromising privacy

As of right now, I think there is considerable room for Euclid to continue to grow and expand its offering. Some things it might consider include:

Most importantly however, Euclid must encourage its retail partners to take a stand on privacy. This could take many forms, including providing customers with ways to opt-out of in-store tracking in online communications / receipts, increasing data security, or tightening limits on how long data can be stored. While this could hamstring the effectiveness of the offering, customers have been clear about their hesitance toward in-store tracking and their concerns must be addressed. As digital technology allows marketers to more closely marry the online and physical worlds, these privacy questions will become increasingly important.

[13] Euclid Analytics, “Unlocking the Business Potential of the Of ine World Through Wi-Fi Location Analytics”. Accessible at http://go.euclidanalytics.com/unlocking-business-potential. Accessed 11/15/16

“Digital Refugee”: The Impact of Technology on Syrian Migrants and The Smugglers Who Profit

Student comments on We know you looked at that ugly sweater: Euclid Analytics, in-store tracking and the narrowing of the online-offline gap