But… what the heck is digitization?

Many companies define this differently. Is it a conversion of information into digital format or a transition from offline to online business? Beyond language, most companies agree- the need to digitize is here, has been for almost a decade and the first ones to transform- will emerge as category winners.

In a recent interview with McKinsey’s strategy leader for Digital[1], he discusses a question that is constantly presented by business leaders: “[What is] the magnitude of the change that digital demands [of us]?” The very fact McKinsey founded a Digital Labs service line (MDL), home to more than 850 recently acquired talent, is in itself proof that the biggest organizations are looking for help in large scale.

The need to adapt the business model and the way the company operates is especially apparent in the retail industry. Enter Walmart – a somewhat late player to the game with just a “minor” advantage – it is the biggest retail entity on the planet, a behemoth.[2] 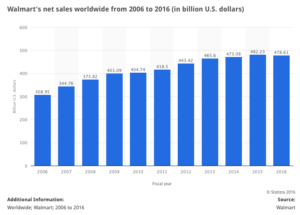 A giant opportunity for a giant:

In Walmart’s case the digital strategy was launched to bridge the digital
/physical divide[3] and to combine eCommerce business with best in class physical assets of over 11,000 stores. The opportunity in “going digital back in the early 2000’s was in an emerging market (over $20B), ballooned from $700M since 1996[4]. Last year, the U.S. retail eCommerce market has reached over $340B in sales and is expected to double by 2020.[5] Despite Walmart’s eCommerce being only ~3% of total 2015 revenues, the company is already one of the largest online retailers globally. Walmart is constantly investing (in 2015: reported to invest over $2B over next 2 years[6]) and re-focusing to capture world market growth. 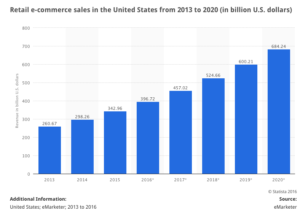 Challenges- are they too late to the game?

Wal-Mart.com (2000) was perceived to be a late joiner and many view Amazon as its greatest eCommerce threat. Amazon was founded 6 years prior and today is valued to have a market cap double that of Walmart.[7]

Should Walmart be worried of the “warehouses-innovator-drones-testing-tech-giant?” In fact, Amazon’s revenue has grown X54 in last 15 years while Walmart has only tripled its online sales. Both companies’ financials have been studied by many analysts and most predict – Walmart’s stock over the next decade will outperform Amazon’s. A few key reasons are: Walmart’s position to capture Chinese growth, proven long term profitable growth and robust free cash flow.[7] In fact, between 2011-2014, Walmart has shown a higher growth than Amazon in number of online visitors.[8] One challenge Walmart faces is maintaining leader position on competitive pricing, which seems like has been lost to Amazon on some product baskets.[9] A few others include: talent acquisition, organizational focus and merging brick and mortar and digital culture. 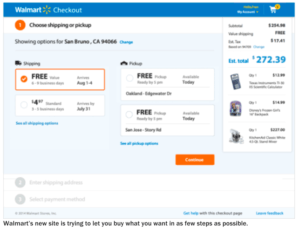 Walmart’s operating model has changed since the early 2000’s- building an internet technology company within Walmart (Global eCommerce), with offices located in Silicon Valley. This organization has its own management team, performance targets and unique talent development. By building a separate organization and setting targets for its unique technology focused talent, they can achieve better delivery on a focused strategy, unrestricted by the legacy organization and culture. Walmart have also established venture groups that invest in companies aligned with the business needs and future aspirations (Jet.com acquisition etc).

All roses from here?

In my opinion, I would focus Walmart on their eCommerce end to end customer experience. I believe the switch to thinking about a different kind of consumer has not been easy for Walmart especially when compared to the SLAs consumers are used to with Amazon. This is apparent in the Walmart.com website UX, return policy, call center quality of service and their online product pricing. All these create an inferior customer experience and lower stickiness. Having said that, who would you bet on long term? Today, Walmart is already winning the talent hiring battle with top tech companies, 70% of the time,[10] so I definitely bet my money on the retail behemoth. (664 words).

[1] How digital is changing strategy, Interview with Jay Scanlan of McKinsey & Co. http://www.mckinsey.com/business-functions/strategy-and-corporate-finance/our-insights/how-digital-is-changing-strategy

[2] Walmart ranks 15th on Forbes Global 2000 list of world most powerful public companies, as measured by a composite score of revenues, profits, assets and market value. From: Forbes website: http://www.forbes.com/sites/laurengensler/2016/05/27/global-2000-worlds-largest-retailers/#38123fb329a9

[4] The Past, Present and Future of E-Commerce, by The University of Kentucky: www.uky.edu/Classes/MKT/390/slides/whatec.ppt

Under Armour: Playing the Digital Game