Did you know that the meat and milk we consume emits more greenhouse gases (GHGs) than Exxon’s annual operations? According to the Sustainability Consortium, grocery products emit 1.7 gigatons of GHGs every year, compared to only 577 megatons of GHGs for dairy and meat [1]. It turns out that the incremental production steps in the product lifecycle compounds the CO2 generated from farming, processing, transportation, and waste management [2].  However, is the meat and dairy consumer the culprit, or are the retailers and the suppliers the origin of these negative externalities?

In a world where the impacts of climate change become more apparent to the everyday consumer, Walmart – the world’s largest retailer – has confronted our modern environmental challenges by implementing systemic eco-campaigns [3]. Under the name of Project Gigaton, Walmart’s fortified sustainability goal, promised in 2016 to reduce greenhouse emissions from its supply chain operations by 1 metric tons, or a Gigaton, by the end of 2030 [4].

In order to turn initiatives into reality, Walmart plans to focus on the short-term and medium-term benefits of modernized store operations to drive these efforts, while empowering the buy-in support from suppliers. Several business leaders at Walmart have emphatically supported technology innovations at the plant.  Laura Phillips, SVP of Sustainability at Walmart, acknowledges that “the short-term strategy will focus in Scope 1 and Scope 2 solutions implementing renewable energy usage at retail locations, cleaner transportation fleets, and optimized supply chain routes” [5]. Each of these activities will be transformed into a single metric deriving the improvement into CO2 tons. Overall, Walmart hopes that these efforts will lead to a 18% reduction of Scope 1 and 2 absolute emissions by 2025 [6]. 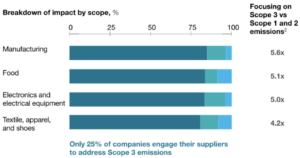 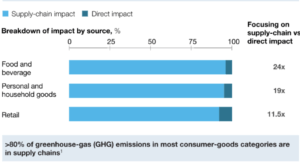 Yet, when approximately +80% of retail emissions occur in the plant supply chain, how can Walmart drive emissions reductions down the line? (figure 1). To focus on this challenge, Walmart has set up a medium-term strategy to empower the buy-in support from its hardline and produce suppliers (figure 2) [7]. By educating its suppliers and stakeholders via an “interactive digital toolkit”, and by setting an annual environmental summit at their HQ in Bentonville, AR, Walmart hopes to engage world leaders through six key environmental pillars [8]. In turn, Walmart will celebrate the commitment of its suppliers through public recognition and press coverage. Each of these improvements will be quantified in CO2 terms and added to a running tally measuring the aggregate return of Project Gigaton.

While supplier support is a necessity, Walmart could make harder decisions to enhance the reductions in emissions. As e-commerce becomes a higher focus of Walmart’s growth strategy, there are new areas ripe for CO2 reductions.  For example, in a case study conducted by Bain in 2016, analysts showed that doubling the average number of items purchased per e-commerce transaction and eliminating split shipments could reduce short-term per-item emissions by 30%, and cut shipping costs by more than 50% (figure 3). 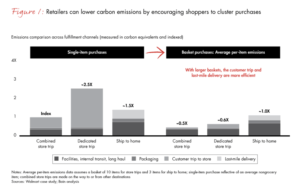 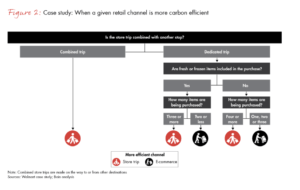 Walmart could raise procurement efficiency through the implementation of data and analytics tools to better predict supplier demand rates, and improve the shipment accuracy (figure 4) [9].

Additionally, in order to increase reductions in the medium term, Walmart could replace its supplier options and promote more carbon efficient channels. Since nearly half – 48 percent – of supply-chain greenhouse gas emissions come from the grocery category, consumable product choices could be shifted towards more local and organic producers, which on average use 40% less water/fertilizer resources than mainstream suppliers [10]. Although more expensive in a per-unit basis, organic produce could promote a corporate culture of sustainability and support the economy of the communities surrounding Walmart distribution centers and warehouses.

Nevertheless, the remaining problem with corporate-led environmental campaigns is measuring the true long-term impact on the environment after they are over. As mentioned earlier, Walmart’s initiatives focus on reducing Scope 1 and 2 internal emissions, and working with suppliers and partners to reduce Scope 3 absolute emissions [11]. Walmart confirmed that they will measure avoided and absolute emissions equally to achieve their goal. Avoided emissions, which occur outside the scope of the product development cycle, tend to be harder to attribute but easier to approximate [12]. By taking this tactic, Walmart’s metrics may be able double the contribution factor of their investments and reach their goal faster.

To summarize, Walmart has transformed a megatrend into a corporate promise for the years to come. By channeling consumer concerns into potential cost savings, Project Gigaton will reduce supply chain costs by reducing energy waste throughout. At the same time, how can Walmart truly ensure that these behaviors will be systematized to derive emissions reductions in the future? Is Walmart’s performance metric a robust metric for the reduction of emissions in the supply chain? [13]

Cotton in footwear and apparel manufacturing

3 thoughts on “Walmart: Reducing Carbon Emissions by a Gigaton”