Venmo’s current business model is an e-payments network service which facilitates consumer-to-consumer (C2C) payments via its mobile phone application.  The business model seeks to displace physical payment – cash or credit card – as a form of exchange between parties in a transaction, enabling, for example, restaurant bills to be split more easily.  Users obtain value by not having to carry cash as well as transmitting funds more easily.  Venmo and its users benefit from the network effect. As more people have and use the app, the more valuable the ecosystem becomes for individual users as they can transmit money to greater numbers of people.

At the same time, it fuses the payments side of the business model with social networking by publishing all transactions in a list-style feed on the front page of the application.  The feed supports both functional and humorous use, ie. Inside jokes, among users which creates additional ancillary value.

This model has not proven adept at capturing immediate economic value for Venmo. Few users pay Venmo for its service.  Instead, Venmo is simply attracting as many users as possible to its system, which like Facebook in its early days, it plans to eventually monetize.

While Venmo’s business model is currently focused on collecting and engaging users, it has positioned itself to provide increasing value for businesses in the future.  It plans to serve a market-making function for e-payments by delivering customers to businesses by integrating e-payments with them.  At the same time, it has a simple API interface which enables third-party app developers to create additional value for Venmo users, for Venmo, and for themselves as they build new apps that rely on the Venmo user base.  Eventually, Venmo will capitalize on its user base and platform-nature by charging third party apps for access to their user base and data.

As Venmo’s business model evolves, it will be able to both generate substantially greater value across users and businesses, but also capture a larger share of it.

To support its business model of attracting the maximum number of users, Venmo’s operating model is focused on providing the greatest experience possible.  This relies chiefly on its user experience (UX) design, technology, human capital, and its market-maker position.

The user’s experience with the application is intuitive and smooth.  There are two primary logistical hurdles to using the service.  First, the user must link either a credit card or bank account.  Second, the user must add “friends” or potential counterparties to any particular transaction.  Venmo’s designers surmount these obstacles by enabling users to link their Venmo account to their facebook one as well as the phone’s internal contact book.  By guiding consumers through these initial obstacles to use, Venmo ensures almost immediate usability. Below on the left is a picture of the process 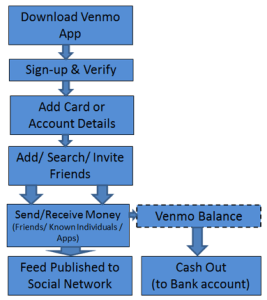 Blending into the application’s usability is the encouragement of more intensive use via the historical feed (above right) displaying transaction descriptions.  The feed ultimately enhances the user experience and does so with a minimalistic design. By combining these elements, the application has succeeded in spreading rapidly, which is itself a key part of the value-add.  An insufficient base or network of users would otherwise sap the app’s viability as consumers cannot immediately turn to it as a means of exchange.

Behind and parallel to the user experience is the technology.  The technology requires two key ingredients: security and accessibility.  These two technology components are at odds with each other.  Because users are linking their bank accounts and/or credit cards to the application, the product must provide a high-level of security and strong privacy policies to assuage consumer fears of nefarious actors gaining access to their financial accounts and personal information.  The security features, however, must be balanced with ease of access in order to enable users to transfer funds to other parties or to receive them.  While Venmo is not perfect, it has provided users, at least, the perception of security and to some extent actual security.  At the same time, it has enabled users to easily enter the app to transmit or receive money, balancing the security with the accessibility aspect.

Both the UX design and technology require skilled human capital.  Nearly half of the company’s 96 employees are software engineers.  Another 12 are product managers and designers.  The firm focuses on attracting top talent among both groups to ensure that the technology and UX design elements of its operating model effectively support the business model.

First and foremost, the operating model’s UX design elements undergird Venmo’s business model.  Without an intuitive and simple UX design, the app would not be as successful in attracting as many users as it has to date.  At the same time, the intensity of such use would be less; it is unlikely Venmo would have achieved $2.1 billion in transactions in the second quarter alone without a easy-to-use interface.  The network effects of the business model in it current form rely on building a large and active user base.  As the business model evolves into one used by other businesses and as a platform, it will rely even more heavily on the competitive advantages that the operating model has enabled.

Finally, as the open API platform matures and more third party developers utilize it, the strategic value of the company’s position within the supply chain will rise.  By making itself the center of C2C and B2C transactions, both on its own app and through third-party ones, Venmo’s business model will be able to capture a larger share of the total value created by all players within the ecosystem.

The NFL Gravy Train: Too popular to derail? The Rewards and Risks of Power Centralization