Venice, a UNESCO world heritage site, which is known throughout the world for its beautiful lagoons, architectural sights, its city structure built on wood piles, its 118 small islands and 338 bridges[1] is under serious risk of disappearing, due to the climate change. Venice sunk 9 inches in the last century and is expected to sink another 24 inches by the end of this century.1 At the time of Venice’s founding, sea levels were almost six feet below what they are today.[2] The average number of floods per year increased from ~10 in 1900 to ~100 today[3]. The rising sea level has already damaged 100s of buildings and monuments in Venice and destroyed the marble and mosaics of multiple basilica. 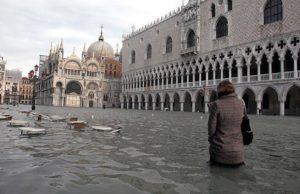 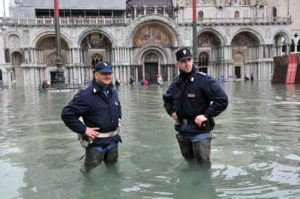 One would assume that the tourism industry would take all required actions to preserve Venice as much as possible, but instead it reacted in the exact opposite way. It increased its offering to Venice, by promoting the fact, that no one knows how long Venice will be around. Between 1990 and 2011 the number of visitors increased by a factor of nine (from 0.2 to 1.8 million tourists a year)[4]. As a matter of fact, the Cruise Lines International Association (CLIA), has not reacted to any warnings or requests by the City of Venice or the Venetian population to reduce the number of ships that enter Venice every year (ca. 600 ships)[5]. The cruise ships exacerbate the problems that Venice is facing, due to dredging requirements and the movement of large ships through the Giudecca canal. The number of tourists as well as the fear of the disappearance of Venice has led to the fact that the resident population has decreased from 120,000 to 55,000 inhabitants over the past 30 years[6]. The number of tourists per day in the peak season is 5,000 people more than the entire population (60k vs. 55k)[7].

Linking all of this back to the question of how companies have adjusted their business and operating model to address the climate change, it becomes apparent that the tourism companies and in particular the cruise lines have taken converse actions. Without pinpointing to an individual cruise company (the biggest ones are Uniworld, MSC Cruises and Costa), the entire industry and especially the Cruise Lines International Association (CLIA) have failed to take corrective actions. They have changed their business and operating model as such to increase demand as much as possible (by exploiting the effects of the climate change), in order to maximize their short-term profits. They are thereby ignoring the negative externalities they are imposing on the entire city of Venice.

How should they react? Rather than individual companies taking corrective actions, the CLIA should take actions to help to preserve Venice (and hence ensure that tourists can visit Venice as long as possible). Despite multiple funding requests, the CLIA or any other tourist organization have not helped to fund measures to alleviate the problem. The most important project right now is the Project MOSE (Modulo Sperimentale Elettromeccanico), a $6bn barrier to protect Venice against the flood. MOSE is financed by the Italian government and is expected to protect Venice from floods of up to 9.8 feet[8]. 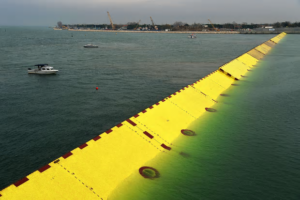 Given that this is already in place, the CLIA should force the other cruise companies to change their business and operating model from exploiting and essentially destroying Venice, to help protecting it. In particular, it could establish a maximum quota of ships arriving per year. Due to this there will be an (artificial) shortage of supply, which will in turn shift the supply curve inwards. Prices will increase as a result. The line in red displays the additional price that can be charged (difference between P2 and P1). This price differential should be used to help preserve Venice and start concrete projects to fight against the effect of climate change. 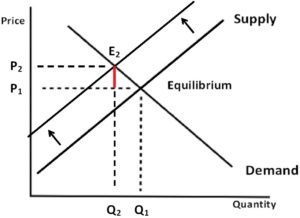 In addition, cruise companies have to start using more remote ports to get visitors into the city. As Professor Paul Linden points out “Dredging to allow the passage of cruise liners stirs up sediment polluted by industry. The local ecosystems are under threat and this will be exacerbated if rising sea levels increase the salinity of the Lagoon”[9]

The cruise companies in the City of Venice is an example of how companies have not only failed to react to the climate change, but have even worsened the effects by adapting their business and operating model in a way to exploit these effects.

[4] UNESCO and UNEP. World Heritage and Tourism in a Climate Change, 2016

[6] UNESCO and UNEP. World Heritage and Tourism in a Climate Change, 2016