Vail Resorts is the largest ski resort holding company in the U.S. with a $6.2 billion market cap and $1.6 billion of revenue. [1] The Company has resort locations across North America, including a high concentration of locations in Colorado and Lake Tahoe (see exhibit 1). 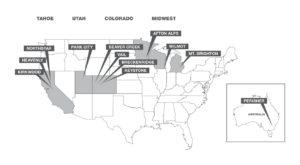 Rising global temperatures and more extreme weather patterns could significantly reduce snowfall amount and consistency, both of which would negatively impact Vail. As a ski resort holding company, Vail’s financial performance is highly dependent on weather conditions; more snow means a longer ski season and better skiing conditions, both of which increase the number of people who visit Vail’s resorts. A decrease in revenue resulting from a season with poor snowfall has a significant impact on profitability as ski resorts have a high fixed cost structure, and long-term reduced snowpack levels could eventually lead to financial insolvency for many ski resorts, including those in Vail’s portfolio. [2]

Vail is already feeling the effects of climate change. Most recently, the Company’s Lake Tahoe-based resorts suffered from extreme drought in the western U.S. states; the Sierra snowpack water content was far below normal from 2012-2015, and it fell to its lowest recorded level, 5% of average, in the 2015 season (see exhibit 2). [3]

Vail Resorts has taken several operational steps that will help to directly mitigate the impact of climate change and seasonal variability, including:

Outside of the operational steps summarized above, Vail has made a commitment to reduce its environmental impact via its sustainability program, EpicPromise. A reduction in energy consumption is a large part of EpicPromise. In 2008, Vail committed to reducing its energy consumption by 10% by 2012. The Company hit its 10% reduction goal in 2011 (a year early), and they set a new goal to reduce energy consumption another 10% by 2020. Examples of investments undertaken to improve energy efficiency include new snowmaking compressors, efficient snow guns, better lighting and heating, efficient boilers, and GPS tracking equipment for snowcats. [7]

In addition to its focus on energy savings, Vail aims to reduce waste and increase recycling (reuses more than 300 tons of material from Vail Mountain alone each year), and they also help create sustainable communities through monetary and time-based donations to local nonprofits (~$7 million dollars and 20,000 hours donated last year). [7]

Vail Could Do More

Although Vail’s operational strategy and commitment to sustainability are admirable, there is almost no mention of climate change in Vail’s website or public filings, and the Company does not appear to be actively involved in climate change advocacy groups. Furthermore, Vail PACs and multiple high-level executives at Vail recently donated thousands of dollars to politicians who deny climate change. [8]

Winter tourism will be hit especially hard by global warming in the coming years, and as the largest ski resort operator in the U.S., Vail has the responsibility to encourage greater regulation and stand up to politicians who deny climate change. There are many ways to accomplish this goal, but one potential first step would be to join Protect Our Winters, a leading climate advocacy group for the winter sports industry that already has dozens of high-profile resorts and ski companies as partners. [9]

Vail is doing great from an individual standpoint, but the Company could be doing so much more to help combat climate change. I hope they become more active in the climate change discussion going forward!

Launch of the Toyota Mirai

Our Problem Isn’t My Problem: Pushing the Costs of Carbon Mitigation onto Supply Chain Partners

Student comments on Vail Resorts Could Be Doing More