Machine learning is transforming the way that governments prevent, detect, and address crime. Around the country, police departments are increasingly relying on software like the Santa Cruz-based PredPol, which uses a machine learning algorithm to predict “hot spot” crime neighborhoods – before the crimes occur. Police forces can use the software to plan officer patrol routes, down to half-city blocks.[i] PredPol does not publish a complete list of the cities it serves, but is currently in operation in over 60 cities in America, including Atlanta and Los Angeles.

PredPol utilizes commonly-understood patterns for when, where, and how crimes occur, and formalizes those patterns using an algorithm that predicts locations where a crime is likely to occur in the near future. Studies show that that crime tends to be geographically concentrated, but that these “hot spots” are often dispersed throughout a city.[ii] Using a machine learning model originally built to predict earthquakes, PredPol uses location, timing, and type of crime as inputs (see below for an example output).[iii] 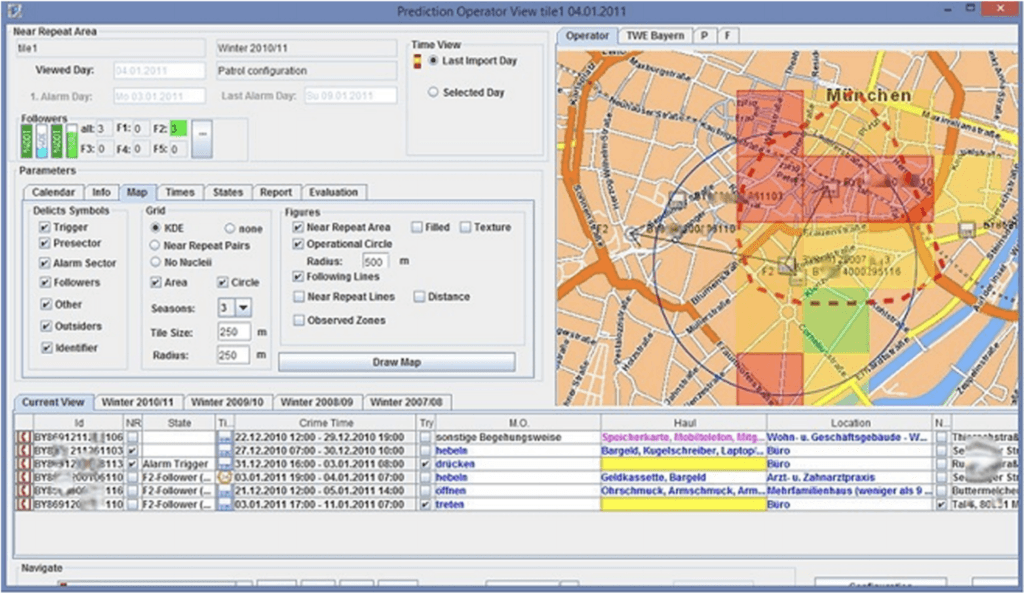 PredPol offers a police department the ability to glean insight from enormous amounts of data quickly and cheaply (police departments pay between $10,000 and $150,000 for access to PredPol’s software).[v] When police forces have limited resources, a tool that can quickly make data-informed recommendations about how to allocate those resources represents a step-change in a department’s efficiency. In 2012, the Police Executive Research Forum surveyed over 200 police departments and reported that 70% intended to increase its use within the next five years to predict the location of “fragile” neighborhoods.[vi]

Over the next few years, PredPol plans to expand to new cities. On October 25, 2018, PredPol announced a partnership with Caliber, an online platform used for public safety and jail management.[vii] As PredPol usage increases, the predictive power of the algorithm should continue to improve.

Planning police routes is far from the only application for machine learning in criminology. PredPol’s algorithm currently focuses on violent crime, but with small tweaks could be used to predict white collar crimes like mortgage fraud. PredPol could also use its technology to analyze police body camera footage, determining which behaviors predict positive or negative encounters with citizens. Adding crowd-sourced footage of citizen-police could also help police departments improve and create a powerful tool for citizen engagement.

Or, with only slightly different inputs, the technology could predict the neighborhoods where social services are most needed. What if PredPol were used to pinpoint city blocks that were vulnerable to potential violence, and then utilized to provide targeted social services? Predicting crime is not the same as preventing it, and fully integrating this technology could fundamentally change how cities deliver end-to-end services.

However, relying on predictive algorithms to identify potential offenders raises concerning ethical questions. Although ProdPol insists that it only uses time, location, and type of crime as predictors, similar predictive software (e.g., tools used to predict recidivism risk)have been found to have significant racial bias[viii]. Even without race as an explicit input, it is not difficult to imagine that a system that over-samples black neighborhoods will continue to predict crime in those neighborhoods. In December 2017, New York City Council became the first in the country to pass an “algorithmic accountability bill,” which established a task force to study how agencies use algorithms and whether they have encoded biases.[ix] Given the growing demand for predictive algorithms, platforms like PredPol will become cheaper and more readily available in the future. As reliance increases, how should agencies think about implementing increasingly “smart” technologies, while themselves understanding when the platforms are doing more harm than good?

[vii] Business Insider. “Caliber Public Safety is Excited to Announce its Partnership with PredPol, Inc. And to Be Able to Offer a Predictive Policing Solution to Its Clients. https://markets.businessinsider.com/news/stocks/caliber-public-safety-is-excited-to-announce-its-partnership-with-predpol-inc-and-to-be-able-to-offer-a-predictive-policing-solution-to-its-clients-1027656394 Accessed November 12, 2018.

Artificial Intelligence Could Become Your Surgeon’s Best Friend: Why Should You Care?