Miami Beach is one of the United States’ most iconic cities.  It has one of the most vibrant art and food scenes, has tremendous cultural diversity, and some of the nation’s most breathtaking beaches.  Miami Beach’s ocean-side location–the source of much of its charm–is becoming one of its greatest challenges as global sea levels continue to rise.  The world watches as Miami Beach struggles with this ever-growing challenge.  Will it be successful?  What can we learn?

The City of Miami Beach is an island stretching roughly 9 miles north to south just off the Florida coast separated from the mainland by Biscayne Bay.  Though entrepreneurial coconut farmers and others had been trying to make good use of the land for decades, development began in earnest soon after a causeway connected it to the mainland in 1918.  Before long, property developers covered the coast with hotels for tourists and mansions for the rich and famous, kicking off a property development boom that has never looked back.  The rush of people from elsewhere in the US and Central American immigrants in the second half of the 20th century brought its population from 46 thousand in 1950 to nearly 2 million in the Miami area in 1990. 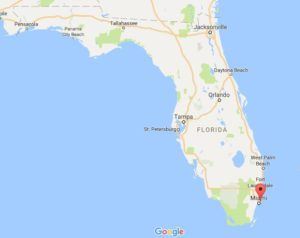 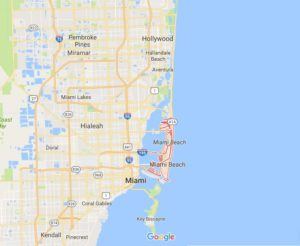 Today, the real estate market in Miami Beach one of the nation’s most expensive and frenetic.  Many outside observers find this confusing–with an average elevation of 1.4m above sea level and seas expected to rise as much as ~2m by 2100, it is hard to imagine how property here could be considered a safe investment.

Despite still being technically “above water”, flooding related to rising sea levels has already started to strike the city.  “Sunny-day flooding” is a phenomenon that has begun to appear during particular high tides in October and March, called “king tides”.  These tides cause ocean water levels to reach a level above the drainage outflow pipes coming out of the city’s seawalls–salt water then flows up through the drains and gushes onto the city’s streets.  City Engineer Bruce Mowry said the problem got so bad that “We literally had people paddling [in kayaks] on the streets”.  Miami Beach’s mayor ran on a platform of helping Miami Beach withstand issues relating to rising sea levels and has delivered on that focus in office:

Miami’s drainage system is being retrofitted with a valve and pump system that will block ocean water from coming in while pumping it’s waste water out.  Flex valves (diagram below) function much like the valves separating ventricles and aorae in the heart do–flows can only move in one direction (outward, in this case).  However, just as with a heart, in order for liquid to move through these valves in the right direction, it still needs to be pumped through.

The ~80 pumps in this project are expected to cost $400+ million, which is roughly equal to one year’s tax receipts for the city.

In addition to the new valve and pump system, the city is taking other measures.  Elevating roads and sidewalks, for example, will funnel water more effectively into the drainage system (see below) 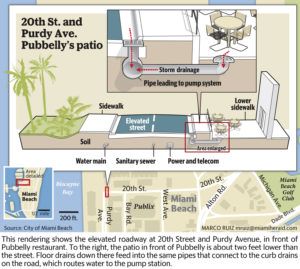 Additional solutions, such as raising the height of the city’s seawalls and sand dunes, and perhaps even cutting in canals, may be required to keep the fight going.  Regulation requiring new real estate development to keep the lowest finished floor of buildings even higher than FEMA’s current flood safety requirements is being considered as well.

Looking to the future

Inevitably, however, the tools available today are still insufficient.  As Vanity Fair summarizes after an interview with the city’s mayor, “By Levine’s estimation, [the currently planned and available measures] are buying Miami Beach 50 years, during which time, he is convinced, scientists will develop ingenious new ways to combat the problem.”

Some of the solution may extend beyond simple engineering.  “Our current plan is how do we stay relatively dry for the next 30-50 years,” Says Jimmy Morales, a city manager.  “the real long term issue is how do we create a sustainable community that includes our land use codes, our building codes and materials.  Do we need to go to a landscaping plan that deals with more salt tolerant species?  How do we help individual property owners?  How do they raise their houses?…The early focus had been on the engineering solution, [but we also] need to think about our focus going forward”.

While the mix of engineering prowess and lifestyle adaptation will still need to bear itself out over the coming decades, Miami Beach’s smaller scale and relatively strong funding position it well to remain on the cutting edge of technological and policy solutions regarding how cities will deal with encroaching sea levels in the future.

17 thoughts on “Under Water: The City of Miami Beach”