The message is written in big red letters on the walls of Under Armour CEO Kevin Plank’s office [1]. What started out as a performance athletic-wear company is now becoming one the of the world’s strongest lifestyle brands thanks to, you guessed it, digital transformation (CEO’s words, not mine) [1].

The traditional Under Armour business model was to engineer and sell high quality, innovative athletic wear. The company continues to pride itself on building products that serve a function. Says Plank, “when I tell you it’s an Under Armour T-shirt, your question should be ‘What’s it do?’” [2] The below image highlights how many different types of long-sleeve running shirts Under Armour sells. Gone are the days of throwing on a t-shirt and going for a run; customers are now much more strategic about which type of gear they wear depending on their fitness goals and weather conditions. 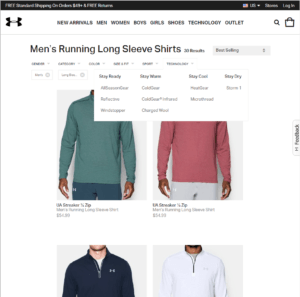 More recently, Under Armour has created value for customers through its UA Record mobile app, which allows for recording and monitoring of activity, fitness, nutrition, sleep, weight, and overall “feeling” [3]. UA Record is the amalgamation of products from two recent acquisitions: MapMyFitness (2013 for $150M) [4] and MyFitnessPal (2015 for $475M) [5] among other added features. Data can be input manually or automatically recorded from supported devices from a range of wearable technology manufacturers. A screenshot from the app is shown below. 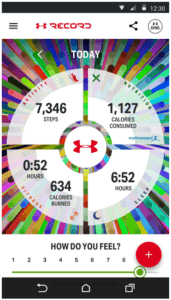 The app benefits customers in many ways. By inputting which shoes you have been wearing while running, Under Armour can log how many miles you’ve put on your shoes. Since shoes tend to wear out after 400 miles, after which injury risk increases, the app can send you a notification when necessary informing you to replace your shoes. [6] Sweet.

Another option is to aggregate all of the data from UA Record – how many hours of sleep you got, what you ate for lunch, how many steps you’ve taken today, when you last exercised, etc. – and create a massive database correlating these factors to outcomes, such as weight loss or how you feel. This data, when analyzed, is very powerful. Users can input their current personal information – age, height, weight, location – and fitness goals and the output is a tangible action plan based on what has worked for other people with similar habits who achieved their goals. Oh and by the way, to facilitate your execution of the plan, you’re going to want to buy all of this Under Armour merchandise. Much cooler.

So how do they do it?

Besides effective marketing [7], signing and sponsoring big-name athletes [8], and investing in engineering [9], Under Armour’s key differentiator right now is acquisition and partnership strategy.

A partnership with SAP is enabling the company to more efficiently capture and organize individual user data. For example, if a longtime biker suddenly records five runs in the past two weeks, (s)he might consider buying running shoes based of SAP’s recommendation [6]. An agreement with IBM allows Under Armour to harness the power of Watson to compare single users to many others with similar traits in its user database. Knowing which habits, diet, or exercise regiments worked for others may allow you to achieve your goals [10]. Additionally, Watson can search the published literature to provide peer-reviewed articles supporting the plan. Lastly, a partnership with consumer electronics company HTC will provide Under Armour with more sophisticated wearable technology such as heart rate monitors and scales [11].

One of the critical challenges that Under Armour faces is how to increase user adoption of the UA Record app. While there are currently 175 million registered users on the various Under Armour apps [12], only a fraction of those are actually active. I have been using the app myself over the past week or so and there is a lot of information that needs to constantly be recorded in order to extract the full value from the application. The launch of new hardware to ease adoption is certainly helpful, but at $300 for the Connected Fitness System, the price is still a little steep.

There is also the debate about whether the benefits of the app outweigh the risks of the data getting into the wrong hands. Is Under Armour recording too much information? What if insurance companies got their hands on every aspect of your personal health? How would that affect your rates?

As a self-proclaimed data junkie and (former) runner, I’m a huge fan of the Under Armour digital transformation. While Kevin Plank will keep selling shirts and shoes, I hope that he also continues investing as much time and effort into data collection and analytics as he has been recently.

Reinventing retail brands with “The Internet of Clothes”

Student comments on Under Armour: Not Just Clothes Anymore