“It starts with understanding that the world is going to go self-driving and autonomous, so if that’s happening, what would happen if we weren’t a part of that future? If we weren’t part of the autonomy thing? Then the future passes us by basically, in a very expeditious and efficient way.” – Travis Kalanick, Uber Founder & CEO.

In August 2009, Uber raised $200k to create an app for on-demand private luxury car orders.[1] Today, Uber is valued at $68 Billion[2] and operates worldwide. Moreover, the company’s name has become synonymous with the automotive transportation industry. Since its inception, Uber has offered the value proposition of “Opportunity for All”[3] as an exceptional car service and job creator.

Despite Uber’s scale, the company has a simple business model: connect drivers with people who seek rides. Uber positioned itself as a partner for anyone with an automobile seeking to earn added income. Whenever a ride is facilitated, Uber charges a 20-30% commission for the ride and the driver receives the remainder.[4] In terms of its operating model, Uber focuses on optimizing its software to facilitate the highest possible number of completed rides. To further achieve this, the company also engages in systematic marketing efforts to recruit drivers onto their platform. 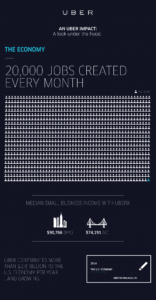 Uber frequently claims the role of an ‘economic impactor’ that adds 20,000 jobs every month.[6] However, drivers are Uber’s largest cost.[7] Therefore, the promise of ‘self-driving vehicles’, a technology made possible by advances in machine learning (ML), have become a primary focus for Uber. “By early 2016 [Uber] had recruited hundreds of engineers, robotics experts, and even a few car mechanics to join the venture. The goal: to replace Uber’s more than 1 million human drivers with robot drivers—as quickly as possible.”[8] The focus on autonomous vehicles (AVs) is transforming Uber’s business and operating model. First, Uber is deconstructing its strategic reliance on drivers and replacing that side of it’s business with automotive company contracts. Secondly, Uber is pushing to be more than just a consumer transportation business.

Because Uber does not intend to manufacture AVs, it is implementing a series of strategic partnerships within the automotive industry. Last year, Uber announced a $300 Million deal with Volvo to develop AVs for the business.[9] These vehicles are already being tested on the roads of Pittsburgh.[10] 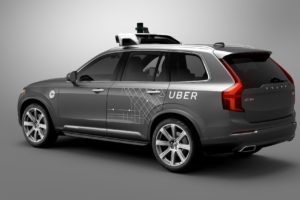 Moreover, Uber reportedly ordered 100,000 Mercedes S-Class cars to integrate with autonomous capabilities.[12] These actions represent a fundamental shift for a business which has never managed an inventory of vehicles.[13] Uber has been developing the software to power self-driving automobiles by aggressively recruiting elite ML engineers.

“Carnegie Mellon University is scrambling to recover after Uber Technologies Inc. poached 40 of its researchers and scientists earlier this year, a raid that left one of the world’s top robotics research institutions in a crisis… Flush with cash after raising more than $5 billion from investors, Uber offered some scientists bonuses of hundreds of thousands of dollars and a doubling of salaries to staff the company’s new tech center in Pittsburgh.”[14] – The Wall Street Journal

Uber’s focus on launching an AV fleet is shifting the company’s business model past being a consumer taxi service. Specifically, Uber is transforming from an on-demand transportation company to an autonomous logistics business. In this new model, humans become just one of the many items being transported. This summer, Uber spent $680 Million on Otto, a startup building autonomous technologies for big-rig trucks. Uber intends to enter the freight hauling industry by offering driverless trucks to businesses.[15] 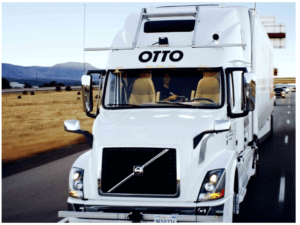 Secondly, Uber has recently “launched a global assault” on the food delivery market as it begins launching UberEats in 22 countries.[17] As Uber works to put more AVs on the road, it is not difficult to conceive of a future operation in which Uber’s AVs deliver an array of other products to customers and businesses.

The AV revolution has fundamentally shifted Uber’s business and operating models. Uber is deconstructing the driver side of its two-sided marketplace. If not properly managed, this could have severe consequences for the business. Due to regulatory restrictions AVs are not expected to be ‘fully autonomous’ and on the road until closer to 2030.[18] Therefore, for the next ~10 years’ drivers will remain an integral part of Uber. I think Uber needs to do a better job of framing its AV investments in relation to its drivers. These ventures have generated extensive press and this will likely have a negative impact on driver loyalty. Therefore, Uber needs to begin marketing its vision for the future of its drivers once AVs replace their jobs. For the near future, drivers are the foundation of Uber’s business model and they have the ability to damage the value of Uber’s business if they leave.

“The Everything, Everywhere, Every time Store”

The American Red Cross: Could the Future of Disaster Response Involve Drones and Machine Learning?