Anyone who pays for TV knows it is an industry ripe for disruption. You pay ~$100 a month to have a clunky box from the 90s connected to your TV, use a giant remote control that lets you surf an old-school looking interface to find the 6 channels you actually watch among the hundreds you pay for. Once you do find your show, you are interrupted every 10-12 minutes for a series of GEICO ads and annoyingly catchy songs about your local personal injury lawyers.

Amid the digital revolution, it is a miracle this horrendous consumer experience still manages to exist. Why hasn’t the whole model already moved online, like Netflix? Well, they tried – you just never heard of it.

“TV Everywhere” is an industry-wide term coined around 2009 [1], in attempt to extend the TV experience to an array of new screens like laptops and mobile devices. The simple solution was this: prove you are a paying TV customer, then access all content online.

To understand the reason behind launching TV Everywhere, it is helpful to understand NBCUniversal’s place in the media ecosystem in the exhibit below: 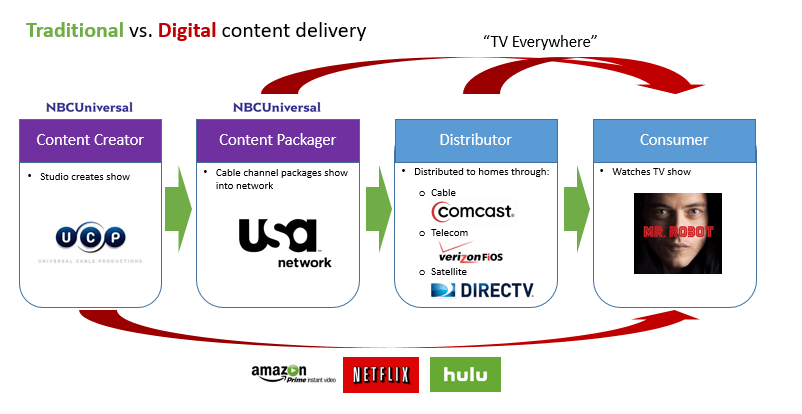 TV Everywhere would allow content creators like NBCUniversal to get paid extra for digital distribution of content, and the distributor gets to offer a more compelling product to compete against the rising digital players like Netflix and Amazon.

An epic flop. Why did it fail?

The seemingly promising initiative has been unsuccessful, however, for several reasons:

It’s no surprise this confusing value proposition failed. 75% of consumers have still never heard of TV Everywhere even as late as December 2015 [2]. But why did TV Everywhere come with so many strings? The crux of the failure boils down to one fact: the existing infrastructure is too valuable to NBCUniversal compared to the digital opportunities.

The current model, despite its inconvenience to the end consumer, offers the best economics to the traditional ecosystem. It is far more important for NBCUniversal to retain TV dollars than to seek digital pennies. Let’s look at the two main revenue streams as a TV channel: advertising and subscriber fees.

TV is still the holy grail of advertising as it is the only platform that can deliver audiences at scale whereas online viewership, particularly ad-supported viewership, is extremely scattered. TV is also uniquely accepted in our culture as a platform that runs 3-4 minute breaks of 30-second ads during a show. No online platform can interrupt a viewing for that long and retain its viewers.

Subscriber fees is a stream of revenue which distributors like Comcast and DirecTV pay NBCUniversal per subscriber for the channels provided. Because the current distributor model forces customers to pay for big bundles of TV channels, NBCUniversal can lock in significant revenues for its marquee channels like USA and Bravo which command high subscriber fees, as well as lesser known channels like Chiller and Esquire despite their low to nonexistent viewership. Consumers are far more resistant paying for subscriptions online, even $2-3/mo, yet the average pay-tv bill per month is $103. [3]

Where does NBCUniversal go from here?

The TV industry has been lucky to have bred such a deep-rooted culture in the living rooms of American families who cannot imagine a world without TV. Despite its inferior product, it will continue to successfully fight the digital revolution and hold a strong place in our everyday lives for several years to come. However, the tide is slowly but surely shifting:

In the long term, NBCUniversal knows it must embrace a digital transformation and has started taking initial steps such as founding Hulu, a JV among NBC, FOX, and ABC which aggregate the 3 broadcast networks’ top shows on one online platform. It offers a simple and significant enough value to viewers to retain a healthy dose of advertising and subscription revenue even in the online space.

NBCUniversal also needs to battle some key issues for a true digital transformation. Rights negotiations will get more complicated as content is distributed through an increasingly complex and changing system, and correct measurement of viewership on the newer platforms will be critical as it is the currency for advertising payments.

NBCUniversal Ecosystem: self made

Smart Services in the City of Dubai

Bringing Digital Innovation to the Mountain