Last November, needing a rental car for a week while my own car underwent repairs, I turned to a relatively new car rental app called Turo in place of a traditional budget rental car firm. Turo offers a business model like Uber but for rental cars, allowing car owners rent their personal vehicles to interested customers. The app takes care of communications between the car owner and renter, as well as payments, insurance, and dispute resolution if necessary. As the app effectively does away with the significant overhead traditional car rental companies bear, a customer can rent a car through Turo often for less than half the price of a commercial car rental firm. But cheap price alone is not what drove me to rent using Turo. What did was a silver 1999 Porsche Boxster, a sleek, German engineered mid-engined convertible with a five-speed manual transmission and leather interior.  Sure, the car had an antifreeze leak and looked like it had been ridden hard and put up wet, but the price was right and the owner sent me merrily on my way with three gallons of Walmart-brand coolant and instructions to “top off the radiator whenever the engine begins to overheat.” And just like that I had a German sports car to drive for a week, all through the marvels of the new sharing economy. 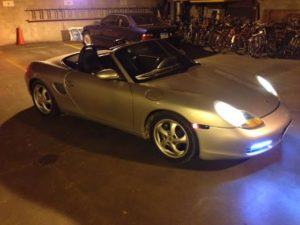 The Porsche I rented from Turo

Turo offers consumers much of the same benefits provided by applications like Uber or AirBnB. People with an underutilized car can rent it to a consumer through the app, relying on the app to take care of the details for the rental in exchange of a small percentage of the total fee. Founded by three Harvard Business School graduates in 2009, Turo (formerly RelayRides) was estimated to be valuated at nearly $311M in 2015, earning it one of Forbes’ “Hottest On-Demand Startups of 2015.”1,2 While the business was initially launched to focus on brief hourly car rentals (much like ZipCar), Turo reports most rentals now are a few days in length or longer. Not having to rely on a static fleet of cars, Turo can offer a diverse range of different vehicles to its consumers, ranging from a SUV for a family of four to use on a weekend ski trip to a compact sports car for someone like me to try on their midlife crisis 15 years early.

Yet the irony of a Turo’s rise to prominence is that the business model which Turo is built on very well may be its undoing. Business travelers (the primary consumers of rental cars) are now choosing to use firms like Uber and Lyft at a greater rate than rental cars. In fall 2015, 43% of those polled reported using firms like Uber and Lyft while travelling for business, while only 40% responded that they used a rental car, down from nearly 55% at the beginning of 2014. While the declines seen in rental cars are nowhere near as large as those seen by traditional taxi services, the trend is nonetheless unsettling.3 However, the threat posed to Turo by car hailing services does not threaten the key aspects of Turo’s business that makes it attractive to consumers. For one, the travelers surveyed reported turning to Uber and Lyft for brief trips where not much travel was expected; longer trips requiring more driving still usually warranted a car rental. And as far as car rentals are concerned, Turo is able to compete on price and vehicle selection. Not to mention that someone looking to pick up their Tinder date in a Tesla or roll into their 20–year high school reunion in a Corvette aren’t going to go to Uber. The risk posed to Turo by ride sharing apps becomes real if a large and well-established player like Uber decides to turn its focus to rental cars. Would the first-mover advantage held by Turo fend off the largess and mature customer network of a firm like Uber? We’ll just have to wait and see.

My recommendations to Turo is to continue to provide the greatest value to its consumers, namely, the widest selection of cars, the best available prices, and the best overall application experience. Only with a great business service (and strategic marketing and implementation) can Turo achieve the network effects that make these sharing businesses so effective. Not to mention that building and maintaining the greatest network is the only real defense a smaller firm like Turo has against competition should a firm like Uber decide to enter the rental car market.

“Erasmus” without accomodation related stress: Uniplaces is here to help you

April Fool’s joke or dash buttons taking over your home?

Student comments on Turo: the Uber Model for Rental Cars