Waikiki: The Urgency of Climate Change Adaptation and Mitigation

Palm trees, white sandy beaches, an iconic pink hotel, and a legacy as a playground for Hawaiian royalty and local legends like surfing pioneer and swimming Olympian Duke Kamehameha – Waikiki beach and the surrounding neighborhood in the county/city of Honolulu is the crown jewel of the Hawaiian tourism industry. Tourism in Waikiki accounts for 9% of tax revenue and 8% of Hawaii’s gross domestic product,[i] or about 40% of the $20 billion statewide tourism economy,[ii] and attracts 71,000 visitors daily. [iii] In stark contrast to this sunny picture, climate change looms on the horizon and threatens to disrupt this paradise. The city/county of Honolulu, in partnership with the state and federal governments, needs to take steps now to mitigate the future threats posed to the community by the medium-term threat of watershed flooding and longer-term peril of rising sea levels.

Map of Waikiki Neighborhood and Ala Wai Canal 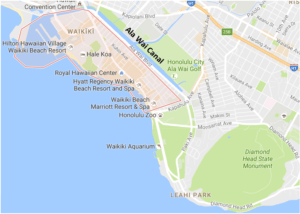 Modern Waikiki is bounded by the two-mile-long Ala Wai Canal to the north and northeast and Diamond Head crater to the south. Prior to construction of the Ala Wai Canal from 1921-1929, Waikiki was an estuary for three streams. The canal drained the land and allowed for construction of hotels and other lucrative real estate. The original design for the canal called for it to empty into the ocean in two places, but the second exit on the southern end was never completed. Since completion, the canal’s water quality has degraded, mostly from surface runoff from parking lots and roads.[iv]

The limited capacity and toxicity of the canal means that the system is vulnerable to the severe weather occurrences that are likely to increase in Hawaii due to climate change. The cooler waters that have protected the island from frequent severe storms have been warming in recent years, which could increase the frequency and/or strength of cyclones.[v] In 2015, there were a record-setting 15 tropical storms in the Central Pacific region.[vi] Without intervention, it’s a matter of when – not if – the Ala Wai canal will overflow.

To the state’s credit, in August 2016 Hawaii’s Department of Land and Natural Resources (DLNR) and the U.S. Army Corps of Engineers drafted a feasibility study project for flood mitigation within the Ala Wai Canals aimed a flood mitigation for a 100-year flood event (or “three times the flow rate of the canal’s maximum capacity”) which would develop water retention basins throughout the watershed and building a 4-foot wall on both sides of the canal. [vii] The project’s projected price tag is $173 million, plus nearly $1 million annually in operating costs.[viii] According to the Corp, a 100-year flood would affect 3,000 structures and 54,000 residents and inflict total property damages of over $300 million, a cost which does not account for lost tourism revenues.[ix] The project could potentially break ground by 2020, but the state will have to find funding for annual maintenance and the 35% of the project cost not covered by federal funding. [x] It’s imperative that the project is started as soon as possible.

However, the threat of global sea levels rising between 1 to 6 feet by 2100 is a more existential threat to Waikiki itself than watershed flooding; in the worst-case scenario of 6 feet, Waikiki all but disappears, according to the National Oceanographic and Atmospheric Administration.[xi] In 2014, the Hawaii Legislature passed a bill to create the Interagency Climate Adaptation Committee (ICAC) and a detailed report on sea level rise vulnerability, which is due by the end of 2017.[xii]

Given that Hawaii alone cannot measurably affect the extent to which global emissions result in sea-level changes, the governing bodies of the city/county of Honolulu and state of Hawaii are faced with the challenge of preparing for a distant problem of uncertain magnitude. Commissioning reports is a step in the right direction, but the governing bodies will need to make the tough political choice of devoting real resources to a fund for future mitigation and adaptation projects and cannot expect the U.S. Federal Government to cover all costs. Additional funds could be collected from private sector entities in the tourist sector via a tourism tax specific to mitigation, or other taxation vehicles to relevant to tourism stakeholders who share the common interest of securing the future of the islands’ costal future.

It might be all sunshine and rainbows in Hawaii’s tourism industry today, but state and local governments need to invest real resources to ensure the island’s future, for tourists and residents alike.

Global Climate Change: Should we really be “wine”-ing?

Student comments on Trouble in Paradise: The Urgent Threat of Climate Change to Waikiki, Hawaii