A Need for a Competitive Edge in Basketball

Is there a role for machines when it comes to managing rosters in sports? In the 2002 Major League Baseball season, Billy Beane of the Oakland A’s, searching for a competitive advantage, laid the groundwork for this question by adopting a system of drafting and signing free-agents through data analytics, breaking conventional baseball wisdom along the way [1]. Moneyball, as it was termed, was controversial and ushered a new job title within professional sports, director of analytics [2]. 16 years later, the Golden State Warriors of the National Basketball Association (“NBA”) are dominating the sport and credit much of their success to Moneyball tactics, growing from a $300M valuation to $2.2B in eight years [3]. Team executives in the NBA are under pressure from fans and owners alike to replicate this level of success. Masai Ujiri, President of the Toronto Raptors, believes his team has found an edge by efficiently and innovatively managing their roster by taking Moneyball tactics to a new level with machine learning [4].

Roster decisions for the Toronto Raptors are managed by Ujiri and his personnel team. The roster creation process begins in the offseason with an amateur draft and free-agent signings and continues through the season with trades and related roster moves. Prior to 2016, Ujiri’s team curated and analyzed copious amounts of data, often in Excel, to form player target lists. Ujiri described this process as too manual and bogged down with paperwork [5].

Seeking to eliminate inefficiencies, the Raptors partnered with IBM Watson in 2016 to become the first NBA team to use the supercomputer to analyze players, removing cumbersome tasks and granting the Raptors more decision making time. In partnership with IBM Interactive Global Business Services, the Raptors built a state-of-the-art “War Room”, a center outfitted with multiple screens showing data captured from advanced cognitive technology from Watson [5]. 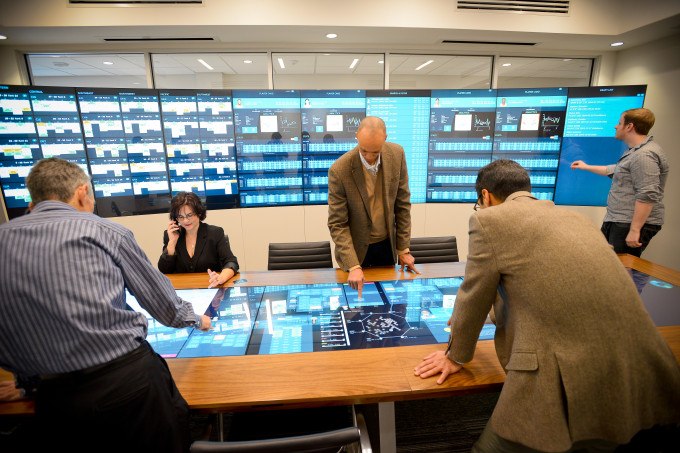 In the short-term, the Raptors are using the War Room to integrate many of the same Moneyball principles as before but in real time and more comprehensively and innovatively. Traditional Moneyball tactics are prone to missing trends or players. Watson, however, can analyze large sets of structured and unstructured data related to the Raptors play, compiling both team and individual player efficiency metrics to pick up on trends over a larger set of data. This enables Watson to determine team deficiencies and ineffective players. Watson then matches these deficiencies and roster gaps with data on college players and free agents to identify players with the highest chances of improving the team in specified areas. Watson goes beyond simply reviewing player stats and analyzes videos more quickly and efficiently than anyone on Ujiri’s team can to identify strengths and style of play, then combines these insights with scouting reports, medical histories and personality evaluations derived from interviews and social media for cultural fit to make player recommendations [6]. In time-pressured situations such as the draft, Watson delivers all of this in a matter of seconds compared to the former process of calling statisticians to get slimmer versions of recommendations [5].

In the medium-term, these recommendations are helping to drive roster management. Watson’s evaluation tool is fluid, a player who may have been graded as positive one day could be viewed negatively the next as Watson incorporates new scouting reports or an ill-advised social media post [5]. The Raptors first used Watson in the 2016 NBA draft and, although tight-lipped on results thus far for competitive reasons, have been working with the IBM team to continue making tweaks to improve the tool.

Beyond the use of AI in roster management, the Raptors can further their edge in the short-term by incorporating Watson as a highly efficient assistant coach. The next stage of machine learning in sports is to formulate game strategies based on video of opponent tendencies and exploitable weaknesses. In the NBA, teams play every other night and often the game plan is put together by scouts [7]. Having Watson as a tool to comprehensively scout the other team in short order would provide meaningful advantages to the Raptors every night.

Watson provides recommendations based on criteria fed by the Raptors, leaving recommendations susceptible to some human biases. Also, one could view the Raptors as IBM’s Guinea and sell solutions to other teams in the future. Given these factors, is there enough reason to believe that machine learning truly gives the Raptors a competitive edge?

Opening up the doors of city hall, everywhere

Student comments on Toronto Raptors: Machine Learning as a Method for Improving the Roster Decision Process