Bananas are the leading internationally traded fresh fruit in terms of volume and dollar sales, and a key produce department product due to its high turnover and the premium margins obtained by retailers [1]. They have a relatively short growing cycle and are grown in tropical locations with humid climates and heavy rainfall, such as Central and South America, the Caribbean, the Philippines and Africa [1]. However, the industry is exposed to environmental risk; in 2012, flooding hit Ecuador, the largest banana producer in the world, which resulted in a 5.6% decrease in output [2]. Another example is Hurricane Mitch; when it hit Honduras, Guatemala and Nicaragua, it damaged 25% of Dole’s world-wide banana production [3]. As a result, Dole reported a fourth-quarter net loss of $108.3 million- compared with a net income of 23.2 million- which included a $100 million write-off for the hurricane damage [4]. For the purpose of this paper, I will examine how Del Monte, a publicly traded banana producer and distributor, has hedged the increased risks of climate change in their supply chain.

Research has shown warmer atmospheres hold more water vapor and, as a result, experience more extreme rains [5]. The possibility of an extreme event such as tropical hurricanes happening in 2017 has increased six-fold since the late 20th century [6]. It is clear that climate change and the resulting environmental disasters have real-world consequences for Del Monte’s business. As of 2016 Del Monte produced 39% of the banana volume they sold on company-controlled farms, purchasing the remainder from independent growers [1]. Bananas, as of 2016, made up 45% of Del Monte’s $4 billion revenue, still constituting a majority of the firm’s core product offering [1]. Thus there is also a considerable price risk that can affect Del Monte’s profitability in addition to supply chain disruption, as Del Monte is exposed to price fluctuations when sourcing bananas, as shown below [7]. Apart from the physical risk of not being able to deliver bananas to major retailers and jeopardizing relationships with customers, Del Monte is also exposed to commodity price risk in the event of an environmental disaster affecting their plantations.
[5] 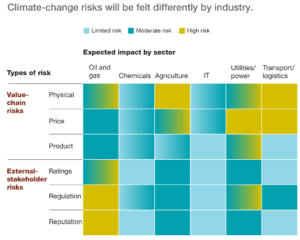 Current efforts to protect the banana production and distribution business

In order to address this concern in the short term, Del Monte has been investing in improving their supply chain through increased capital expenditures. In 2017 their capital expenditures totaled $146.7 million, with 51% relating to their banana segment [1]. Banana segment expenditures consisted primarily of expansion of their production operations, with the remainder of the expenditures spent on a new distribution center, additional ripening room capacity and IT integration [1].
In addition, Del Monte is exiting certain banana growing areas that have proven to be continuously susceptible to climate change; in 2016, Del Monte wrote down $2.5 million in asset impairments and other charges related to drought conditions in Brazil due to the decision to abandon certain banana and other fresh produce growing areas [1].

Diversification as a long term strategy

Del Monte has embraced diversifying the company’s product offerings, not only becoming a first-mover and market leader in pre-cut fruit, but also hedging their business from climate change related disruption such as higher banana production and procurement costs. In 2015 Del Monte grew their global fresh-cut business volume by 30% and sales by 32% year over year [8]. The shift in product mix is in the below graph, where we can see that Del Monte has steadily shifted away from fresh bananas as their main product offering, both in volume and overall product types [9]. Although climate change is not the only consideration, the diversification efforts will protect Del Monte in years where banana production is negatively affected by supply chain disruptions. 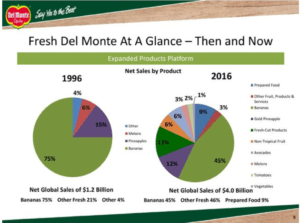 Del Monte should continue to diversify their business, focusing on alternate regions and different food products. Del Monte management should also examine whether capital expenditures in the fresh fruit business is improving the bottom line, and create metrics and timelines to evaluate the long-term viability of the banana production business- as well as further changes to their core business strategy.

Other considerations
Questions that merit further thought are: 1) How can giant multinational companies directly exposed to climate change risk come together to combat this issue 2) At what point should a company move from diversifying their business to shifting entirely away from their core business products?

Sustainability in Food: How General Mills is Combating Climate Change