Swiss-based Weisse Arena Gruppe is struggling with the consequences of climate change similarly to many other ski resorts all over the world and during 2015/16 reported its first net loss in history at CHF 1.1 million at revenue of CHF 89.9 million [1]. How do they recover?

Weisse Arena is an integrated service company operating the cable cars and lifts in the area as well as surrounding businesses, such as hotel, gastronomy and equipment rental. Under the brand of Laax it runs one of the larger and higher ski areas in Switzerland with 235km of slopes at an average altitude of 2060m above sea level [2] and is a major employer within the canton of Graubünden providing work for over 1000 people during the winter months [3].

Since the end of the 19th century average temperatures in Switzerland have increased by more than 2°C with a particularly notable increase since the 1980s (see graph) [4]. Feeling this impact directly, rain up to an altitude of 2000m caused a drop in visitors to Laax to 846,451 guests in 2015/16, a decrease of 5.4% from the year before and 21.6% relative to the record year 2002/03 [5]. Previously, in 2014 the operator had asked locals to remain home in order to allow tourists to enjoy the little snow left [6].

Despite this poor performance, Weisse Arena did not come unprepared. To date 35km [7] of slopes are permanently equipped with snow cannons. This required overcoming Graubünden government regulation from 1990 allowing coverage of maximum 5% of resort area with artificial snow [8] as locals feared the cannon’s energy consumption. Only as worries about the areas major employer surfaced and energy needs could be met increasingly by renewable sources did the regulation get lifted.

In fact, this environmental focus has led to lofty goals: The Group’s vision is to become “the world’s first self-sufficient winter resort” [9]. Today, 100% of the resorts energy needs are covered by CO2 neutral energy from Swiss hydro plants (~75%) and the resort’s own solar panels (~25%) [10] [11]. Furthermore, a wind farm project will bring renewable energy to 5,000 households in the region. Renewed lifts (such as 2015s La Siala chairlift) reduced energy consumption by 5%.

Furthermore, Laax aims at a zero waste policy having implemented a functional recycling system and reduced waste through the KeepCups initiative [12]. Sourcing local, eco and Fairtrade ingredients for the gastronomy is another step towards reducing Laax’ ecologic impact [13].

However, pressures remain high. The resort continues to invest in its summer infrastructure attracting hikers and other outdoor tourists (increasing share of summer guests from 7 to 11% since 2002) [14], and discounts encourage winter tourists to buy tickets months in advance in order to smooth revenue. However, still 95% percent of revenue is generated during the winter season and discounts have a direct impact on the top line. Furthermore, improving conditions through artificial snow coverage (with estimated costs CHF 1 million per km) [15] and making slope adjustments as well as active snow management remain expensive. And global warming is predicted to continue… 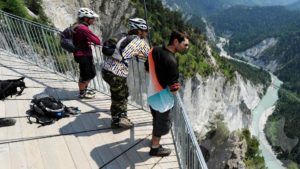 So what can be done? US ski resorts such as Washington School House have invested more aggressively in diversifying their offer through theme parks, spa offerings and introducing new outdoor activities [16]. This will also increase average revenue per guest. Whilst Weisse Arena was already able to increase average spending from CHF 93 to 106 over the last four years, this will be a trend likely to continue as servicing the resort will become more cost intensive [17]. Additionally, Weisse Arena will have to become more considerate in how it expands its network. In particular, this means shifting lifts and slopes to higher altitudes. In order to reduce personal and energy costs the company will need to focus on improving utilization of lifts and slopes, closing some of them temporarily when few people are on the mountain.

Another, albeit ambitious, initiative may be to shift the main ski season altogether. Most German states do not have a week of “ski holidays” for schools in February when conditions are best, restricting families to coming over Christmas and New Years and hence before snow coverage has reached its maximum. Such a movement however will most likely only succeed when even the highest ski resorts in the Alps will fully experience the impacts of global warming.

Until then the solution remains to invest in artificial snow and alternative attractions, and hoping that the rest of the world starts taking its eco-footprint as seriously as the Weisse Arena Gruppe. Happy skiing!

General Electric – Not so General anymore!

No, my name is not like the baseball equipment brand

Student comments on The world’s first self-sufficient winter resort: Skiing in the heat