In December 2015, 195 countries reached a historic agreement at the UN Climate Change Conference to fight climate change—highlighted by the fact that it took place in the hottest year on record in the world (2). Recognizing the urgency of building measures against impending climate shocks, a short time later in April 2016, the World Bank released its Climate Change Action Plan (5). You might ask, what does a bank have to do with climate change? Well, the World Bank is not your typical bank in the usual sense. It was established in 1944 with the mission of “working for a world free of poverty.” Over the past 72 years, the World Bank has grown and evolved in pursuit of this mission (1). As the issues of poverty and climate change have become more urgent, the connection between the two has become more clear to the World Bank. Ultimately, the World Bank has decided that both issues can be resolved if pursued in tandem.

By producing the Climate Change Action plan, the World Bank has completed extensive planning around helping developing countries tackle climate change. In the past, the World Bank has attacked poverty by allocating its budget according to specific categories. The focus was on large infrastructure projects at first then more recently social development, including education, health, and nutrition (3). By 2009, the World Bank began devoting an increased share of resources to climate change related projects (See Exhibit 1a and 1b). As the vulnerability of poor countries faced with climate change has become more apparent, the World Bank has reset its course. It will be pursuing climate control through an integrated approach that includes “climate-smart agriculture investments like climate resilient seeds, high-efficiency irrigation, livestock productivity and early warning systems for natural disasters (5). These developing countries will need to leverage their limited resources to meet rapidly changing circumstances. Integrated spending will encourage countries to align their efforts across both and take advantage of the efficiencies between them.

The bank has also begun to deliver on its action plan. For example, it delivered $5 million in aid to Haiti, which has been designated by Maplecroft, a risk management company, the country most at risk due to climate change. Haiti’s vulnerability to extreme weather events is intensified by its high levels of poverty, environmental degradation, a poor economy, limited government and crumbling infrastructure (7). Approximately 96% of the country is exposed to two or more hazards including hurricanes, floods, earthquakes, landslides, and droughts. Most rural household incomes depend on the agricultural sector, accounting for 25% of Haiti’s GDP(8). Similarly, the action plan for other developing areas of the world like the Middle East and North Africa which is vulnerable to water availability, rising sea levels and heat waves (4). “Countries start from different points and have different emission levels and therefore need differentiated actions and support (10).”

The World Bank needs to push towards being as accountable as possible to ensure that it delivers on its action plan. Climate change integrated with poverty reduction demands a long-term and comprehensive strategy (9). This creates inherent tension against the short-term and immediate needs of a poor population. Structure and standardized metrics will need to be put in place to track results. The World Bank already keeps track of copious amounts of data related to its projects. Focused and consistent use of this data to first set up benchmarks and then determent relevant parameters will enable the World Bank to adjust as necessary in these sensitive countries. Historically, the World Bank has encountered criticism regarding its efficacy, however, now more than ever the bank can play an important role in driving preparedness across the world. Millions of people will be facing extreme weather patterns such as heat waves, droughts, floods, and hurricanes which will affect agriculture, food and water (4). In the next 15 years, the increased frequency of natural disasters will potentially push 100 million more people into poverty (5). (658 words) 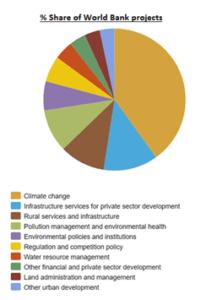 Adapting to climate change: Implications for a mining giant