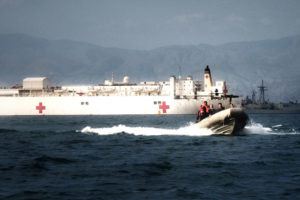 Every day, the United States Navy addresses some of the country’s most pressing security concerns, including global climate change. This phenomenon has created new challenges for how the Navy operates, but thankfully, there are also opportunities if the nation’s sea service can adapt to the changing environment.

In 2009, the Navy established an initiative known as Task Force Climate Change[1] to study the implications of climate change on the Navy’s operations and force structure. The task force identified several factors that could increase tensions among nation states and lead to a greater need for naval force:

How can the Navy address these challenges? Well for starters, the Navy can find ways to proactively reduce tensions with some of our nation’s likely competitors by entering into agreements that increase cooperation and understanding on the high seas. The United States is not currently a signor of the Convention on the Law of the Sea (CLOS), and is in fact the only member of the United Nations Security Council that has not ratified the treaty.[7] By taking this step, the Navy would join with other countries in adopting a standard that more clearly defines ownership of oil and mineral rights and establishes a code for peaceful conduct within the Arctic region.

The Navy could convert more of its fleet to a sustainable fuel source, such as biodiesel blends, that have been spearheaded by initiatives such as the Great Green Fleet.[8] By switching to biodiesel, not only does the Navy reduce its carbon footprint, but it also gains several operational advantages in terms of fuel supply security, shortening of its supply chain, and the ability to stay at sea longer before refueling.

The Navy should also consider increasing the number of vessels that may be needed to operate in the Arctic or disaster-affected areas. The Navy currently possesses no icebreaker ship[9] capability, and its hospital ships, which form the backbone of the Navy’s medical relief efforts after a humanitarian disaster, currently stands at two.[10]

The Navy should also increase its investment in renewable energy generation through the Navy’s Renewable Energy Policy Office (REPO)[11]. The Navy has committed to sourcing one gigawatt of its energy demand from renewable sources, but synergies could be realized by partnering with its sister services, the Army and Air Force when purchasing contracts for renewable energy. When taken together, the military represent 93% of the entire federal government’s energy requirements. By combining this total service demand into aggregated contracts, the Navy could leverage the bargaining power that results from an economy of scale.

Finally, the Navy should consider the adoption of battery storage for meeting the energy demands of the fleet. Lithium-ion batteries are reducing in size, and though they may not be suited for a shipboard environment, they may be very useful in reducing the peak energy demands of naval installations while at the same time increasing the energy security of the installation.

The challenges associated with addressing climate change are already increasing security concerns on the world’s oceans. If the Navy is to continue to fulfill its mission of defending American interests on the seas, its leadership must take action now to adapt to global climate change.

Is the world running out of chocolate?

Show Me the Honey: Plight of the Humble Bee

Student comments on The US Navy: Are the Oceans Reaching a Boiling Point?