The sKale of the issue – supply chain exposure to extreme weather

One of the more unusual news-stories in the UK this year was Tesco’s announcement that it was going to ration sales of lettuce and other veggies to British consumers [1] (Figure 1). This action by the world’s fifth-largest grocer and retailer prompted a plethora of puns in the media. But behind the headlines was a more serious story. The vegetable shortage was caused by poor growing conditions in Spain and Italy, which experienced record levels of rainfall – the type of extreme weather increasingly common due to climate change [2].

Tesco has cause for concern. With 6,809 stores located in 12 countries in Asia and Europe [3], it imports produce from across the world to satisfy customers that have come to expect year-round availability of groceries, regardless of seasonality. But as the ‘courgette crisis’ this year highlighted, Tesco’s core operations are exposed to the impact of global warming and extreme weather. As a huge global business that produced 3.89 million tonnes of CO2e last year [4], Tesco cannot ignore its contributions to the issue. 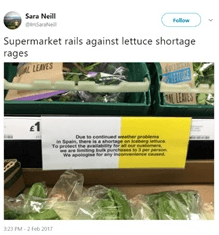 Tesco’s response has focused on a long-term strategy to reduce its carbon footprint. The first move has been to drive accountability and transparency. Earlier this year, the retailer developed targets through the Science-Based Targets Initiative (SBTI) [6] to reduce scope 1 and 2 Green House Gas (GHG) emissions 60% by 2025 and scope 3 GHG emissions 17% by 2030 as compared to a 2015 baseline (see Figure 2 for current levels). These targets are designed to set emissions reductions on the course needed to limit global warming at or below a 1.5 degrees centigrade increase.

Tesco must now turn these commitments into results. It aims to run on 100% renewable energy by 2030 [7], which it plans to achieve by buying more renewable energy in the short term and by investing in on-site solar power generation and storage capacity in the medium term. It is also striving to half the carbon intensity of stores and distribution centres by 2020 compared to 2006 through initiatives such as energy efficient vans and more efficient logistics management [4]. Whilst Tesco has already invested a hefty £700m in energy and refrigeration efficiency measures since 2007, this isn’t without benefit – it has generated £200m of electricity savings per year as a result [7].

Working with its 15,000 suppliers is also critical. Tesco has announced plans to encourage suppliers to set their own science-based targets, helping them to share best practice through a knowledge hub and reducing the cost of investments in energy saving measures through collaborative purchasing schemes [8]. It appears to be on the right track – out of 300+ companies which have signed up to the SBTI, Tesco is one of only three major corporates currently on target [9]. 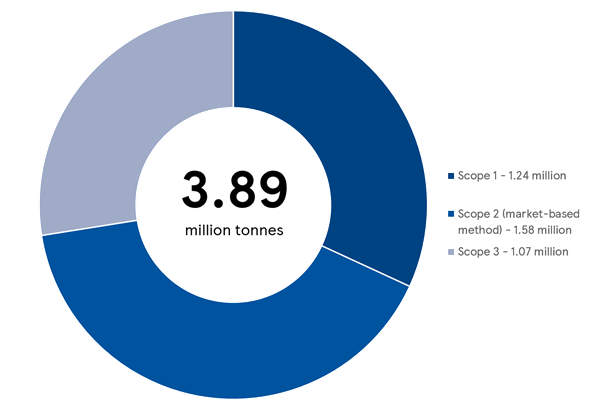 Tesco has gone further than most in its efforts to mitigate further global warming. But given climate change is already underway, management appears to have put less emphasis on how to improve the resilience of its supply chain to the inevitable future shocks from extreme weather. In the short term, management should consider how to diversify where produce is sourced from (the Murcia region in Spain, which was hit during the lettuce crisis, provides 80% of Europe’s fresh produce in winter months). In the longer-term, Tesco should support greater self-sufficiency of British food production by increasing the use and capacity of local suppliers: the UK has a £21 billion trade deficit in food and agricultural produce, and only 23% of fruit and vegetables come from home soil [10] (Figure 3). With supply chain risks only amplified by the uncertainties surrounding future trade deals in a post-Brexit world, competitors have been quicker off the mark to strengthen their local sourcing, and Tesco needs to catch up [11]. In addition, given Tesco’s scale of purchasing power, it could go further than ‘encouraging’ its suppliers to improve their environmental record. Tesco has proffered the carrot to suppliers by offering to support them make the necessary changes to reduce their carbon footprint. But there also needs to be a (celery) stick. One such approach could be to impose procurement criteria that requires supplier compliance with certain environmental standards.

Tesco faces several decisions about how to reduce the environmental impact of its supply chain. However, this case study sparks debate about much bigger questions. As environmentally-conscious consumers, do we expect too much from supermarkets to provide what we want, when we want it? Given their role in setting arguably unrealistic expectations with consumers around global year-round supply, should supermarkets try to shift consumers back to more local, seasonal consumption habits? Where does the balance of responsibility for our lettuce lie?

[11] Zlata Rodionova, “Morrisons to hire 200 British suppliers after warning only half the food eaten in UK comes from the UK”, Independent, February 3, 2017, http://www.independent.co.uk/news/business/news/morrisons-hires-uk-suppliers-local-produce-warning-a7585216.html

Student comments on The Tip of the Iceberg: Climate Change, Lettuce Shortages, and Tesco’s Efforts to Adapt its Supply Chain