Party in the City Where the Heat is On?

What is now exclusive luxury beach front property, will soon become the centerpiece of an underwater city. In 50 years South Beach Miami could be fully submerged in the Atlantic Ocean. The glamorous photos that this generation shares on social media as they cruise Ocean Drive will at that point become timeless relics that capture the last years of prominence of this region. Is Miami’s current situation truly this dire? Given the ongoing debate surrounding global climate change and what its exact impacts will be, it is difficult to answer that question with certainty. However, Miami Dade County can take steps to avoid this situation altogether. 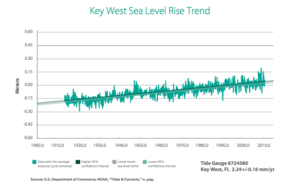 With sea levels expected to rise by at least two feet in the next forty-five years, Miami could soon be facing a crisis. In this scenario a simple fortification of existing coastline structures will not yield significant results. This is due to the fact that the land in Miami itself is composed of a large percentage of limestone which is porous in nature. Therefore, simply fortifying buildings along the coast with storm walls will not protect the building foundation’s structural integrity [4]. In short, without several fundamental changes to existing infrastructure and geographical living patterns of Miami residents, the city could easily become the lost city.

Remove Your Talents from South Beach?

Thus far, Miami-Dade County has identified these issues and attempted to patch the problem.  According to the Miami Dade County Climate Action Plan Miami is taking the generic route towards battling climate change. They plan to develop a more sustainable solid waste system, reuse wastewater, and make significant investments in the transportation infrastructure [5]. The majority of the county’s action plan is centered around reducing greenhouse gas emissions. Though this course of action is important for long term sustainability, it fails to protect the city against the immediate threats posed by rising sea levels.

Furthermore, Miami is still allowing real estate developments in riskier beach front areas. This will only exacerbate future problems. Miami allows such developments primarily because the tax income that such developments generate for the county are a substantial portion of the county’s overall revenue. Developers choose these risky areas because in theory they can command premium prices as these areas are still currently considered prime beach front areas [6]. If Miami-Dade County does not encourage an inland movement, and builds out infrastructure in areas where that are already at risk, Miami will essentially be investing and reinvesting in areas that are doomed to fail once ocean levels rise. To address this concern, Miami Dade County should target a longer term fix by fundamentally changing how the county incentivizes real estate developers in order to promote more sustainable and fortified cities.

Fill in The Gaps

In order to preserve its city Miami-Dade County should promote development in more inland areas of the city that are further from the coast. Furthermore, modern architectural theory posits that compact cities with well integrated transportation and infrastructure systems are the most environmentally friendly cities as well [7]. This is because compact cities reduce the need for cars and optimize the use of living spaces and thus improving living efficiency [8]. Miami may need to take more extreme measures and rezone inland areas and make heavy investments in inland infrastructure to develop a more robust compact city that is shielded from the immediate impacts of climate change. Miami can entice developers to build in currently less desirable inland locations by providing discounts on land or tax breaks when possible to incentivize the development of non-beach front property. By reducing investments in the South Beach areas, Miami Dade County can fund and subsidize developments in more inland areas. Urban infill developments such as these will maximize the land use of the inland areas of the city. While such an inland shift would mean fewer beachfront views, it would also reduce the amount of those luxury beach front condos that would become ornamentation for a modern day Atlantis.

A Carbon Tax on Airfare: Will It Kill Management Consulting?

Student comments on The Sun is Setting On South Beach Miami