“The news out of Philadelphia, is that there is no news,” declared Mark Dillen of the USC Center on Public Diplomacy in early 2009. “No newspapers, that is. The Philadelphia Inquirer and the Philadelphia Daily News have joined the swelling ranks of American print media that have gone bankrupt.”[2]

How did we get to this point? How did an industry that attracted $65B in advertising revenue in 2001 fall to around $20B only a decade later? [8]

The answer begins by looking at the four primary roles of newspapers and the competitive pressures enabled by technology in each:

As a result of these parallel pressures, print media found itself in a crippling cycle: flight of advertising revenue leads to smaller papers, layoffs and decreased talent, limiting a newspaper’s quality and breadth of coverage. This decline causes subscribers to be dissatisfied, and they turn to other media sources. Advertisers see declining circulation numbers, and further cut newspaper advertisement budgets, restarting the cycle. [2] [9]

A tech response to a tech problem

Media companies have scrambled to innovate in the face of such intense and existential pressure. They have turned to content paywalls, subscription smart device applications, and online advertisements to try to offset advertising and subscription revenue, but this has only covered ~10% of a ~$45B industry decline (figure 1). [6] 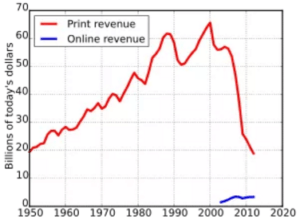 Among the most promising technology startups to target the media industry is Blendle, a journalism “micropayments” startup attempting to modernize the way readers purchase content. [4]

Blendel’s fundamental hypothesis is that people are willing to pay for the journalism they consume, but not in the way people used to pay for it. Instead of subscribing to a single news source and paying for blanket access to all content, Blendel sources articles from many media outlets and allows customers to browse and “buy” articles that they are interested in. When the user clicks into an article, their account is automatically charged for that content (per-article prices range from about $.09 for a standard newspaper article to $2.50 for headline, long-form articles). [1]

Blendel keeps 30% of the revenue, passing 70% to the media source. The opportunity to participate in this “media marketplace” has drawn news sources including The New York Times, The Washington Post, The Economist, and Fast Company. [1]

The technology combines convenience (available on smartphone, laptop, or tablet), flexibility (access to a wide range of news sources, including newspapers and magazines), trust (users can request refunds for disappointing content, discouraging publishers from creating “click-bait” and encourages quality), ease (being able to debit a “wallet” or charge to a credit card reduces the friction of pay walls and multiple log-ins), and targeted content delivery (generating customized recommendations based on preferences and history, reducing content search time).

One year after conception, Blendel has a million paying users in Germany, the Netherlands, and the U.S. (beta version only). [7]

If scaled, this model would give newspapers access to a global market of potential readers. The model also rewards “unique” or complex (and expensive) forms of journalism, as these types of articles are more likely to be attractive to customers. [7]

Blendel should seek to be embedded in the websites and apps of media outlets. Instead of having to subscribe to The New York Times, The Economist and Wall Street Journal to read content from their websites, users could use their Blendel account to pay for articles on each site.

This would reduce the friction of purchasing articles from different publications and allow newspapers to continue to collect on other website advertisements. It would also appeal to the consumer who wants an unabridged view of available content from a news source, without having to pay for content that isn’t relevant.

Chase Cashes in on Mobile Banking

Student comments on The startup trying to save a media dinosaur