The recent rise and proliferation of autonomous vehicles (AV) that will be operated on public roadways and among human operated vehicles has necessitated a regulatory response by the United States Department of Transportation (USDOT). The speed at which AVs are being developed and the increasing interest in their ability to revolutionize transportation will present a regulatory challenge as government tries to rapidly respond to the technology and companies that are leading innovation in the field. It will be crucially important that the USDOT gets the regulation right so they don’t stifle innovation while still protecting citizens and fostering a stable baseline upon which AV developers can work from.

In October 2018, in response to the need for a regulatory framework, the USDOT published “Preparing for the Future of Transportation: Automated Vehicle 3.0” (AV 3.0) [1]. AV 3.0 was published to build upon and clarify “Automated Driving Systems 2.0: A Vision for Safety” [2] which was published in 2017. AV 3.0 addresses multiple areas of potential regulation, but this article will focus on two, safety and technology commonality. 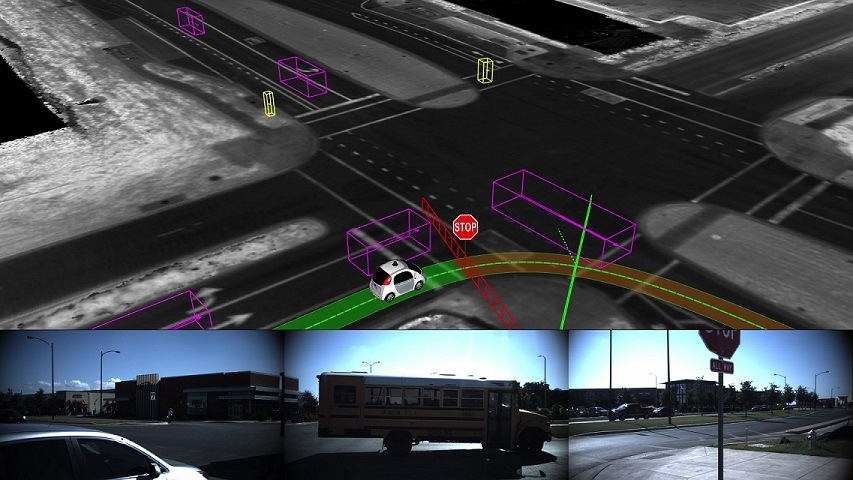 Example of what the Waymo self-driving vehicle software “sees” [8]

Safety: AV 3.0 lays out a relaxed approach to safety regulation. Although AV 3.0 makes safety the USDOT’s number one principle, it re-affirms the USDOT’s position supporting a self-certification approach in order to promote safety and innovation [3], additionally, the USDOT urges AV developers to make their voluntary safety self-assessments public to increase transparency. [4] This laissez-faire approach to establishing basic safety requirements for testing and launching AVs is problematic. As the March 2018 fatal pedestrian accident involving an Uber AV [5] highlights, there are life and death consequences to the testing and use of AVs on the current infrastructure, and a lack of regulatory guidance governing basic safety could put other motorists and pedestrians at increased risk.

Technology Commonality: In AV 3.0 the USDOT commits to being technology neutral in order to “promote competition and innovation.” [6] While this commitment is crucial to the development and growth of differing technologies, where I want to focus is on technology interoperability and the ability of AVs to interact in real time with other AVs, human operated vehicles and with their external environments. The USDOT has begun the development of a dedicated communication system, however, the department’s stance is that while communication is an important complementary technology, the USDOT does not recommend that the ability to communicate between vehicles (V2V) or the ability of the vehicle to communicate with the surrounding environment (V2X) should be a precondition to the deployment of automated vehicles. [7]

There are an infinite number of roadway and traffic complexities that can be introduced to an AV operating on the current infrastructure and interacting with human operated vehicles, pedestrians and road work crews. Without a mandatory and common communication system, the ability of AVs to function in the current infrastructure will be significantly degraded. We will lack the ability to rapidly communicate with AVs to re-direct traffic, create detours or otherwise change traffic flow in real time and road crews will be left guessing what an AV will do when it arrives at an obstacle.

In response to these challenges, I recommend that the USDOT take a more active role in establishing a base of regulatory guidance for AV development. Specifically, more detailed safety guidance is needed to ensure that developers are not putting people at risk when they test their systems on public roads. As users of the roadways we have an expectation that there are similar safety requirements for both human operated vehicles and AVs. We know that any late model car on the road will have air-bags, anti-lock brakes and seat belts, we should have the same assurances of general safety with regards to AVs operating around us. Second, I believe that a dedicated, common, and secure communication system needs to be mandated, so that traffic signals and traffic changes can be communicated to AVs in real time. Third, the legislatures at the federal, state and local levels need to start implementing legal frameworks for what happens when and AV is in an accident, what an AV chooses to hit when a collision is unavoidable, and who gets tell the AV what to hit and who’s safety to prioritize.

There are many open-ended questions with regards to the future of AVs, but with a more rapid response by regulators and a closer and more meaningful relationship with industry, the  USDOT can establish the regulatory framework that will lead to safer testing and roll out of AVs, and establish a common system of communication across all AVs before there is a patchwork or different and incompatible systems across multiple AV platforms.

Can Machine Learning Save Innovation in Pharmaceuticals?

Student comments on The Regulatory Challenge of Autonomous Vehicles